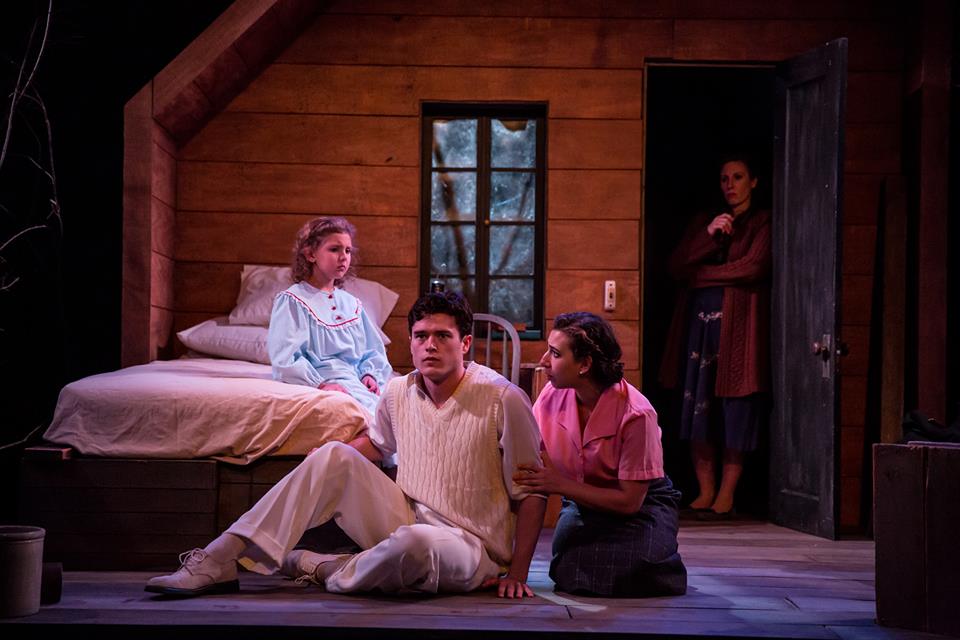 I never know quite what to expect from Walking Shadow (which is a good thing). Their 10th Anniversary season kicks of with an old-fashioned story by a very modern storyteller, Gabriel, from award-winning English playwright Moira Buffini. It makes for a very entertaining evening of theater.

“Who are your tears for, Mrs. Becquet?”

The story takes place in 1943 in the midst of World War II. The Nazis have taken over the islands in the English channel between England and France. On one of them, Guernsey, a family of women have been displaced from their home to a nearby farmhouse. Jeanne Becquet (Katherine Kupiecki) struggles to keep her family afloat while she worries over her absent son Myles, away serving in the British Air Force. Their neighbor Mrs. Lake (Janet Paone) helps out around the farmhouse as she’s able, but she doesn’t take attitude from anybody. She’s normally the one dishing it out.  Jeanne’s daughter-in-law Lily (Miriam Schwartz) stays with her, but they have to be diligent in order to keep Lily’s Jewish heritage under wraps.

“We have something in common.  Forgive me, but nobody likes you either.”

Jeanne’s pre-teen daughter Estelle (Lily Wangerin) doesn’t take kindly to being kicked out of their home. She’s been sneaking back in and staging pranks to make the Nazis think the house is haunted. The chief target of her mischief is Von Pfunz (Wade A. Vaughn), who himself has taken an interest in Estelle’s mother Jeanne. Jeanne is not above flirting, and more, to keep her family safe—but Von Pfunz is not the easy mark she often takes him to be.

“The dead are all the same. There’s no salvation. They turn the bones into fertilizer.”

This particular dark night Lily stumbles across an unconscious naked man, near death, on the beach. She pleads with Jeanne to allow her to bring the man in and nurse him back to health, even though harboring an unexplained young man under their roof could get them all killed. Estelle helps Lily with this project, and since their new unconscious friend needs a name, Estelle calls him Gabriel. When Gabriel (Ross Destiche) finally awakes, he has no memory of who he is. He seems to speak English like a native. But he also turns out to be unsettlingly fluent in German. Yet he doesn’t even have an understanding of the war going on, or the danger Nazis like Von Pfunz present.

“Force and chaos are terrible masters.”

Who is Gabriel?  He has moments when he reminds Jeanne and Lily of their missing Myles. He might be another random British pilot, fallen from the sky. He might be a local. He might be a German spy. He might be an angel conjured by Estelle to protect them all. The fun and the tension of the play is that Gabriel might be any or all of these things. Everyone seems certain they know, and everyone is wrong. The audience has a similar hard time parsing out the mystery as Gabriel becomes more entangled in the family relationships. The sudden attacks of pain in his head that drive him to the floor promise that more secrets might be revealed in time.

In many ways, Gabriel is a classic, old-school World War II tale of survival. Yet it’s very different from that standard mold. There are no men coming to the rescue. In fact, it is the women who must save not only themselves, but also Gabriel. Amy Rummenie directs Buffini’s script perfectly, letting comic moments and sweetness in, but never fully relieving the sense of danger than permeates the lives of these women at all times. They must constantly be on alert, shifting tactics to stay one step ahead of the enemy, or respond to new setbacks and complications. There’s the very real sense that there’s ultimately no one you can trust, and that even the most unassuming among them might go off at any moment.

“I can’t remember a single thing I’ve done or a person I’ve loved.”

In addition to the hard-working ensemble cast, another thing that really sells the story is the great work of the design team, in particular Steve Kath’s farmhouse set, complete with tree branches crowding the windows, and Tony Stoeri’s very active lighting design which seemed to have a life of its own. Stoeri not only had a good time incorporating candlelight into the mix, but provided a nifty effect of light tracking through the windows from outside and cutting across parts of the set, as if the unseen Nazi soldiers patrolling outside were shining their flashlights around the grounds, ever vigilant.  A nice and creepy touch to the proceedings.

“I love to hear you lie, Jeanne. Every word excites me.”

I’m beginning to think there’s nothing Katherine Kupiecki can’t do. She’s invariably one of the most compelling performers in any production in which I’ve seen her. Here, as Jeanne, you can’t take your eyes off her—mostly because you don’t dare, her character is capable of anything, and you never know what she might do next. She’s willing to toy with Von Pfunz’s affections, and lie right to his face—but she’s so bad at both of these strategies that she just has to keep spinning so he won’t have time to catch her. Everyone else hopes she has their best interests at heart, but they can be forgiven for doubting her intentions. It’s ultimately going to be a game of who she has to sacrifice to save everyone else, and you’re never quite sure how that’s going to shake out until the play’s final moments. Or if she’s going to be able to remain in control of the situation long enough to be allowed to determine everyone’s fate, including her own.  It’s a heck of a performance.

“Get someone in your coven to take him in.”

Gabriel has a great ensemble overall. Janet Paone as Mrs. Lake reminds one of those great character actors you’d see in film after film in the movie houses of the 1940s and 1950s. She provides ample helpings of much needed comic relief, and at the same time she also made me a little nervous watching her around kitchen implements. She is not a woman you want to cross.

“I hardly think you’re going to bring about the fall of the Third Reich with my poetry book.”

Wade A. Vaughn is delightfully vile as the Nazi Von Pfunz. Vaughn injects as much humanity as he can into the Nazi officer, but ultimately, let’s face it, however lonely or well-intentioned, the guy’s a Nazi. He is never less than a threat, and he always seems to be outthinking everyone around him.

“I was out celebrating my anniversary in the minefields.”

Miriam Schwartz has a tough load to carry as Lily and she does it well. She’s designed by the playwright to be the designated person in peril, while also balancing her affections for an absent war hero husband against a present tall dark and handsome stranger. She’s caught up in situations more than she’s allowed to drive them so it’s hard for her character to be an active participant. Schwartz counters all these challenges with a lot of heart and intellect. Like Jeanne and Mrs. Lake, you can always see her taking in the situation and trying to calculate what the next move needs to be if she wants to stay alive.

“The damage innocents can cause.”

The role of Estelle is a heck of a thing to put on a young actor’s shoulders. Unlike some other characters, Estelle is driving a great deal of the action, and she has to square off against pretty much every other character onstage at one point or another. This includes going toe to toe with a Nazi officer, as well as trying to enlist their newfound amnesiac friend in a plot to help save the family. You can see Lily Wangerin struggle sometimes with this challenge—the copious amounts of dialogue, the different intense relationships, the British accent, not to mention the moments of violence. The great thing is that the rest of the ensemble is always there to support her, particularly in those intense one-on-one scenes, so you’re frequently able to stop worrying about the actors and just get lost in the story of the characters again. It’s going to be quite a nice line to have on her resume when Wangerin’s done with the run of Gabriel, and she will have earned it.

“I can’t remember anything. I don’t even know what I look like.”

As for Gabriel himself, Ross Destiche also has a tricky combination of acting challenges to pull off and he performs it all so nimbly that he’s apt to cause you to forget just how hard his job is. Just for starters, he has to play a blank slate, with a British accent, and then frequently switch over to speaking in fluent German. (Vaughn as Von Pfunz was such a convincing Nazi that I had to remind myself that even though his German dialogue seems like second nature, he’s not actually German in real life. It’s just as much a mountain to climb for him as it is for Destiche, and Vaughn also makes it look like the simplest the thing an actor could be asked to do.)

“At the risk of sounding callous, this is very good news for us.”

Destiche has to not only process all the various theories people float about who he really is, he also needs to make decisions on how to engage with all these people who are complete strangers to him. With no knowledge of Nazis or even the nature of World War II, Gabriel doesn’t know the danger he’s in until he’s already stepped into the middle of one bad situation after another. This can be a big dose for an audience to swallow, but Destiche helps you believe in Gabriel’s bewildered but trusting nature, and has you hoping no one takes advantage of him in a way he can’t bounce back from.

“What did you mean by ‘the greater truth’?”
“You ask me this before breakfast?”

The role of Gabriel also requires the actor to good-naturedly submit to, well, for lack of a better term, submit to being treated like a big old slab of beefcake. Gabriel is described at one point in the play as being “uncommon good looking, like a painting out of church.” (Basically, if something that pretty comes out of the ocean, you don’t throw it back, you bring it home.) Destiche spends nearly all of act one naked with a comforter wrapped around his waist, both in and out of bed.  In a moment of unintentional comedy the night I attended, at the top of act two, lights were just coming up on Gabriel getting dressed in a full white and cream-colored outfit, and an audience member said with disappointment, “Oh, he’s got clothes on.” (Dear Audience Member, while I sympathize with your sentiment, you’re not at home watching TV.  The rest of us, including the actors, can hear you.)

If you’re looking for a solid old-fashioned war story with a modern edge, Walking Shadow has you covered with Gabriel.