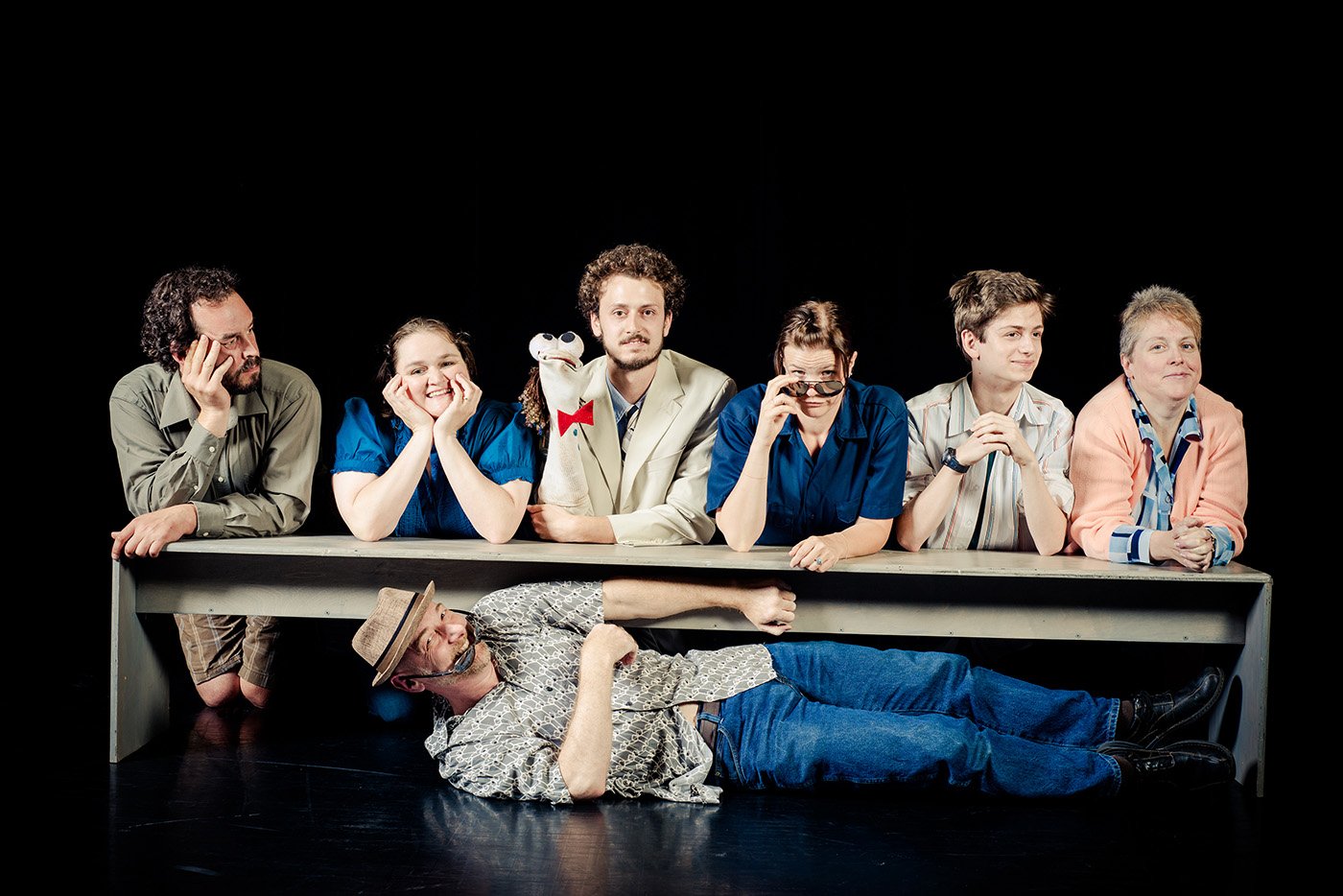 I’m going to need to revise my list of favorite plays and add Fuddy Meers. You should go take in the current production of the play by Loudmouth Collective over at Nimbus Theater to see the reasons why. I’ve read it and seen it performed before but seeing Fuddy Meers as presented by director Natalie Novacek and her relentlessly goofy ensemble of actors I was reminded again of all the many reasons I liked it. It’s a very funny play about very unfunny things. You probably shouldn’t be laughing, but the whole thing is just so weird, you can’t help yourself.

“Somebody lose some bacon?”

Claire (Noe Tallen) has a rare form of amnesia. Every morning when she wakes up, she has no memory of either herself, or her life. She needs to start from scratch, even learning her name. Thankfully, she has a positive personality and just rolls with the new information as it comes to her. One of her first instincts is always to smile and laugh. She trusts people, mostly because she has to. This doesn’t always lead to the right choices, especially when some of the people around her aren’t trustworthy.

Claire’s husband Richard (Leif Jurgensen) patiently tries to fill in the blanks every morning. He’s even compiled a book of the basics for her, and runs interference with their surly teenage son Kenny (Spencer Harrison Levin). But before Claire can get her bearings this particular morning, a masked man (Matt Sciple) with a limp and a lisp suddenly appears to spirit her away, warning her that Richard is dangerous.

“I know the siren call of ganja, Kenny.”

They escape to the home of Claire’s mother Gertie (Karen Wiese-Thompson). Gertie has fully recovered from a stroke but now speaks in a jumbled form of English that only sometimes makes sense, yet is always hilarious. (Yes, you keep telling yourself you shouldn’t laugh, but Gertie isn’t bothered by it, so why should we be?) Of course, Claire’s amnesia combined with Gertie’s mangled language makes it really hard for any warnings to get through.

“They base freeze croquet.”

Gertie’s home gets another visitor in the form of the masked man’s sidekick Millet (Paul Rutledge) and Millet’s sock puppet companion Inky Binky. Binky swears more than a puppet should, and is also pretty free with sharing uncomfortable private bits of information. Binky gets Millet in a lot of trouble.

“God, I hate this basement.  It’s like truth serum.”

Also in trouble are Richard and Kenny, out searching for Claire. They get pulled over by a lady cop named Heidi (Katie Willer) just as they get working on a joint to calm their nerves. Needless to say, very few people are quite what they seem, and things get very complicated, and extremely funny.

Pulitzer Prize-winning playwright David Lindsay-Abaire is a master of finding comedy in unlikely places, and moving moments of drama in the ridiculous. The new Loudmouth Collective production embraces both those sides of Fuddy Meers wholeheartedly, following the script around its serpentine path of emotions. Some less successful productions fight the play’s instincts, trying to milk a little extra comedy here, a little more pathos there, when the play has already moved on. Loudmouth Collective’s great cast have wisely grounded themselves in the humanity of all these characters, however outlandish, and so whatever happens, the moment always rings true.  And the thing is, no matter how peculiar or misguided some of these characters are, nearly every one of them is driven by a need to love and be loved.  Even the darker parts of this comedy have a warm beating heart at their center.

“That puppet was saying the strangest things about me, mama.  Is he a trustworthy source of information.”

The production has also managed to find a clever and entertaining way around the script’s one big challenge—the multiple locations. Fuddy Meers moves from a bedroom to a car to a kitchen to a basement and back again repeatedly. Rather than try to squeeze some scenes into tiny spaces in order to make more room for others, director Novacek and her design team went the opposite direction, using the whole stage for each scene. Of course, that means scene shifts, which can be death to any play’s forward momentum.

“I can smell Daddy’s cologne.  It must have seeped into the wallpaper.”

Scenic/properties designer Sara Brandner put half the set pieces on wheels and streamlined the other furniture needs, using key pieces to give a sense of place. (This actually dovetails quite well with Claire’s state of mind, given that there are a lot of pieces of the puzzle “missing” there, too.) The one constant on the black background flats is a window in the center with white curtains framing it. People are constantly popping in and out of the window during the scene shifts as well as the regular action.

“Could someone give me one piece of truthful information, please?!”

Sound designer Katharine Horowitz cranks up some quirky instrumental tunes and the entire cast dances and bounces around onstage while simultaneously moving the furniture on and off.  (Shout-out to the stage management team of Rachael Rhoades, Amy Abrigo and Katie McCarthey, who I’m sure also had a hand in choreographing this.) This ingenious solution keeps the comedy and offbeat energy of the play going even between scenes. It seems silly to call a strategy for scene shifts inspired, but it really is. It fits the play perfectly. Rather than pretend scene changes aren’t happening, they turn them into a party. (In fact, the night I saw it, I think someone at one point started setting up for the wrong scene, so someone else just danced right out and took the wrong piece away while other people got the right stuff in place.)

“I wish I had said something when I could.”

I could go on about how each individual member of the ensemble just knocks it out of the park (and they do), but I’d rather just end the review and tell you to go see it all for yourself. Lindsay-Abaire has given each member of the cast a lot of comedic moments with a sprinkling of dramatic ones in the mix for good measure, and every single one of them just has a ball playing their part. Fuddy Meers seems like it must be just as much fun to perform as it is to watch. There’s a lot of joy onstage, and the feeling spills out into the audience.

Fuddy Meers is such a treat that, even though it’s only January, I’d be surprised if it didn’t end up on my list of favorite pieces of theater for all of 2014. If you want to entertain me, I think Loudmouth Collective just raised the bar.