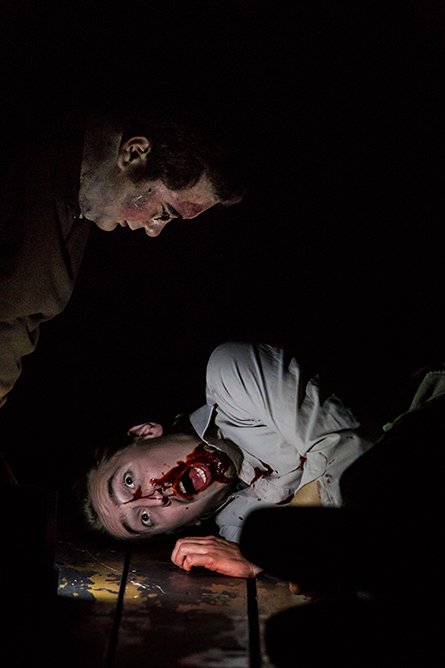 Fair warning: the amputation sequence about halfway into Dangerous Productions’ take on the horror legend that is Frankenstein had one of my friends in the audience feeling nauseous enough to put his head between his legs until the scene was over. I think the only way I was able to keep from following his lead was that I averted my eyes. Since the procedure involves first a scalpel cutting flesh, then a saw cutting bone, and one final manual snap—for each foot, to be followed by the hands – the audio part of the experience is potent enough without the visuals. I think this is the kind of show my friends were warning me about from Dangerous Productions when I saw my first show of theirs in last year’s Twin Cities Horror Festival. That one was more psychological than visceral terror (emphasis on the viscera). You gotta hand it to Dangerous Productions, they know what buttons to push, and they push them gleefully.

“I need things from you. You can give them to me, or I can take them.”

But Frankenstein isn’t all blood and guts. There’s a twisted little brain in there, too. Dangerous Productions raises the bar for theatrical horror. They were the best thing I saw in the Twin Cities Horror Festival last year, and I’d be surprised if the same wasn’t true this year. Their horror is the best kind of horror. It’s horror with a point. Horror created by smart, talented people who aren’t just trying to scare you here and there. They plan to get you scared right at the start and keep you scared and on edge for the entire roller coaster ride until they’re done. Then they’ll release you, but you’ll be thinking about them until next year’s Twin Cities Horror Festival. And you’ll be able to recall what they did the year prior instantly and recount details to friends like you saw it yesterday. It’s good old-fashioned nightmare fuel. The kind that takes up permanent residence in the dark corners of your mind.

“It takes a lifetime to die.”

Writer/director Tyler Olsen’s script for Frankenstein is a delightfully perverse non-linear mindf*ck of a play. The multitude of plot threads keep the viewer perpetually off balance, but they’re all tied together enough by character, content and theme that I had no trouble bouncing from one narrative to the next as young doctor Victor Frankenstein (Miles Duffey)’s mind kept coming unglued. But is Victor in our time, or the 19th century of Mary Shelley’s original novel? Well, both.  Also, the narrative of Shelley’s novel leaks into both those time streams sometimes hijacking the story. Repeatedly a moment of high tension in one scene bubbles over instead to the frantic beginning of another scene in another entirely different timeline. The production is also a master at misdirection, playing with our eyes and ears in the dark, suddenly flashing a light into a corner to reveal a gruesome or otherwise unnerving figure, snapping a light off just as an image has a second to imprint on our eyes. Frankenstein also makes great use of wide-eyed people screaming, unexpected resurrections, and humans coughing up blood. There’s also the occasional eye gouge or heart being ripped from a chest, you know, the usual.

Victor has two beloved Elizabeths—one for the 19th century (Megan Koester) and one for the 21st (Shannon Mae Leach). He also has a best friend Henry (Jay Kistler), an ailing mother (Michelle Casali), and an ill-fated servant Justine (Liz Carey-Linskey). He runs afoul of a receptionist (Michelle Makie) who puts him on hold, perhaps quite literally forever. She doesn’t just count to ten. She counts into the hundreds. Lurking around the edges of all the story lines is, of course, the Monster (Garrett Vollmer), scar running down his face. The monster takes all shapes—the original monster of the book, a child abductor, a soldier, and all manner of unsettling horrors on which it’s impossible to put a coherent label. Victor, too, is his own rogues gallery of atrocities—scientist, doctor, battlefield surgeon, serial killer, madman, suicide.

“Doesn’t it look like the stars are all laughing?”

Mind you, I’m not entirely certain of any of these things. It’s like explaining a joke and killing the laugh. Explaining the trajectory of this horror show shines too bright a light on the uncertainties and ambiguities that keep it so friggin’ creepy. It requires its shadows to work its unforgiving magic on you. In fact, the only misstep the play makes is tacking on a Scooby Doo style ending within the ending which tries to explain away some of the fog by giving us an explanation of what might have knocked Victor’s mind off its axis. Don’t explain it. Just let it lie. My mind is going to come up with something to much more effectively scare the crap out of me, personally, as will every other person in the audience. If you explain any part of it away, then I can dismiss this as a fantasy rather than a warning.

“There used to be a lot more monsters.”

Because Dangerous Productions has twice now, two years in a row, managed to transcend the genre and the framework of the festival itself. Part of the reason I don’t “get” horror or make it a regular part of my diet is that I don’t see the point. If you look at the Twin Cities Horror Festival from 20,000 feet, it’s just a bunch of white people scaring a bunch of other white people in the dark. If you’re going to ask me for even an hour of my life I’m not going to get back, well, I want something for that. I want something I can take with me. Frankenstein pretty blatantly states (perhaps a little too blatantly), “You’re scared of monsters in here, in the theater? That’s cute. Wake up, moron. There are monsters all around you right now. And victims of those monsters, too. Why don’t you get out there and do something about it instead of passively accepting information and assuming there’s nothing you can do to stop the monster. Stop looking for things to be afraid of and be afraid of things that matter. Get out there and stop the monster.”

That’s the kind of horror show I can get behind. Go see Frankenstein. Just remember to look away before you have to throw up.