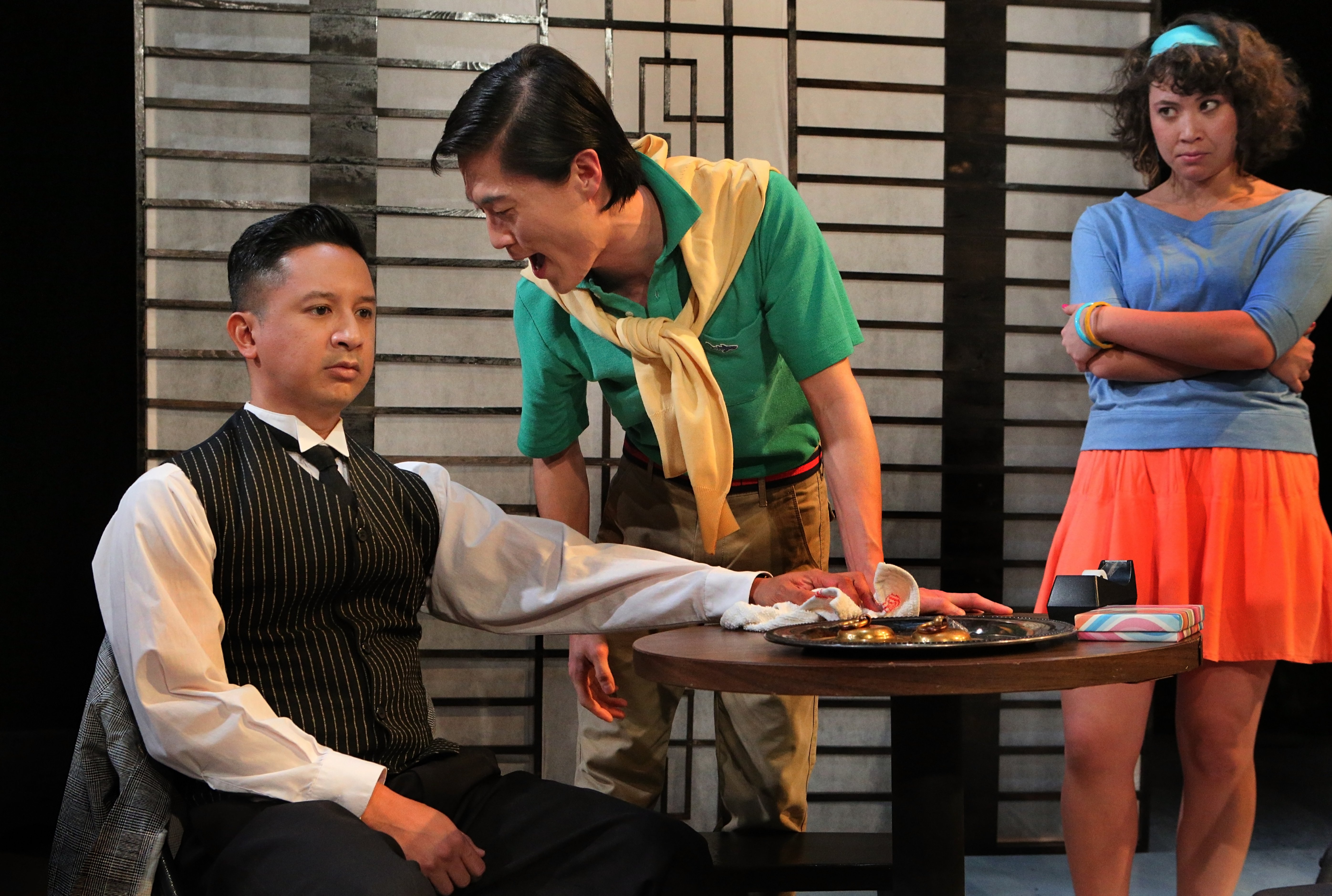 I’m conflicted.  F.O.B. is an Obie Award-winning play. It’s David Henry Hwang’s first significant play. It launched his career and laid the groundwork for everything he wrote that followed, from The Dance and the Railroad to M. Butterfly to Yellow Face and many others. It also deals head-on with the poisonous and self-defeating issue of racism within ethnic minority groups in a way that’s so honest it’s sometimes hard to listen to (in a good way, because it should be uncomfortable).

One of the problems with being a pioneer and leading voice like Hwang, though, is that all the plays that come after yours—build on and copy and riff off of yours, including plays you write yourself—sometimes make revisiting that very first play an awkward exercise. F.O.B. won the Obie in 1980. Hwang was a good writer then but he’s become an even better writer in the 35 years since. Theater and storytelling in general, I’d argue, has learned a thing or two over the last three and a half decades. F.O.B. will always be a play that merits study because of its place in the canon—of theater in general and Asian American theater in particular. But some plays age better than others. Some of the standards of playwriting in the 1980s feel more than a little creaky these days when we put them on their feet on a 21st century stage. (The plays of Pulitzer Prize-winner Beth Henley like Crimes of the Heart and The Miss Firecracker Contest are other examples that spring to mind.)

“God of warriors, writers, and prostitutes.”

I wanted to like F.O.B. more than I did. The production from Mu Performing Arts is everything a writer could ask for—the design looks great, the performances are strong, often amusing, sometimes quite moving. Mu has also been working F.O.B. on the road, so to speak, by performing the play—set in a Chinese restaurant—in actual Asian restaurants around the area over the past year. To keep that vibe going for the current production, they have local restaurants catering the production and you can order yourself some food ahead of time to eat during the show now at Mixed Blood Theater. Everybody’s doing everything right.  But for me, F.O.B. isn’t a terribly compelling piece of theater.

“You don’t have to fight for it. I’ll give it to you instead.”

Grace (Meghan Kreidler) is working at her family’s Chinese restaurant outside of Los Angeles in the mid-1980s. She is confronted with two very different, and equally awkward, suitors for her time and attention. One is her cousin Dale (Michel Sung-Ho), who has fully assimilated into American culture, perhaps a little too well. The other is Steve (Randy Reyes), one of the F.O.B.s whom Dale despises. F.O.B. stands for Fresh Off the Boat. Guys like Dale think guys like Steve stick out too much by refusing to acclimate themselves to their new country, making the rest of the Asian Americans look bad. Whether it’s not knowing any English and trying to smile and nod their way through a conversation they don’t understand, or being rude and demanding because they had high status in their home country that is no longer recognized in America, someone F.O.B. can cause a lot of problems (in Dale’s opinion).

“All we have to do is sign a worker’s contract.”

The other thing going on under the surface, however, is that both Steve and Grace are channeling the spirits of ancient warriors of Asian culture. No, really. This makes Steve even more demanding than he might otherwise be, and makes Grace far less inclined to put up with Steve’s attitude. Tellingly, Dale doesn’t have an ancient spirit dwelling within him that ever pops out. He’s suppressed or even killed the historical traditions passed on to him in a desire to be “fully American.” This also means, for the play’s sake, that Steve gets to carry an additional spiritual load. He also channels the spirit of those Chinese workers brought over to America to be manual laborers on projects like the Transcontinental Railroad. The promise of America was dangled in front of them to lure them to the United States, and then promptly yanked out of their reach once they’d served their purpose. The anguish of this chapter of the American immigrant story cuts quite deep.

“There are no gods who travel. Only warriors travel.”

As much as all of this is compelling to me in the abstract, in the execution F.O.B. kept stumbling over itself. It’s very likely I’m in the minority of reviewers on this one. I’m fully prepared to accept that maybe because I’m Anglo, on some really basic fundamental level I’m not going to “get” F.O.B. I’m also fully prepared to accept that because the surface stakes of the play (which guy gets the girl) are so heteronormative, maybe as a gay guy the basic thrust of that narrative doesn’t really grab me anymore. But honestly, I watch straight stories all the time, and I watch stories with protagonists of color and of other cultures regularly, and I find myself engaged without even thinking twice. For some reason, as much as I wanted to be drawn in by F.O.B., it just didn’t grab me. Will I see other things written by Hwang? Absolutely. Do I enjoy the work that Mu does?  No question. This time out, with F.O.B., I find myself surprisingly detached. Your mileage may vary.