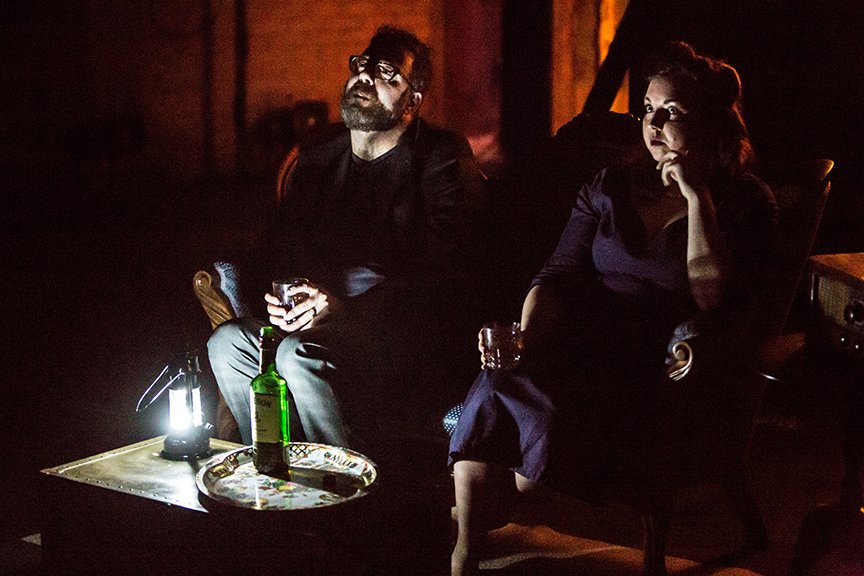 Robert (Mike Fotis) and Joyce (Debra Berger) have an awkward first (and last) meeting in Farmhouse as part of the Twin Cities Horror Festival; photography by Dan Norman

The publicity for the play Farmhouse from The Importance of Being Fotis for the Twin Cities Horror Festival makes things pretty clear:“On the morning of December 28, 1949, Joyce Slorjen, Robert Huxton and Ruth Huxton (formerly Slorjen) were found murdered in the home of Jack “Buddy” Slorjen. Come witness the hour before they were murdered.” The flyer purportedly from the Ashburg Gazette which audience members are admonished to read before attending the play gives the further detail that Robert and Ruth will die of gunshot wounds while Joyce will be strangled to death.

“Turns out nothing sobers ups  man like a home invasion.”

So, with all that on the table, what is Farmhouse about? Are you one of the audience who will watch the play and begin to forget what is about to happen? Or are you one of the audience who will mark each moment looking for clues about what is to come? Will the nameless terror have a name? Will the danger come from within or from outside? Will everything somehow make a horrible kind of sense? How much, if anything, will we see of the end of their lives? There is a shotgun propped up beside the front door. Who is going to use it?

“I did punch Hitler once. Did I mention that?”

Knowing the final outcome colors the story for different viewers in different ways. You can’t help but more acutely listen to every single thing that is said, because you can’t help but wonder if any of it has significance to the end of the story. Mike Fotis, who wrote Farmhouse as well as playing the role of Robert, has crafted a tight little dysfunctional family comedy/drama. Joyce (Debra Berger) and Ruth (Katie Banelli) fight as only two sisters can. And they don’t bother to explain anything for the audience’s sake that the two of them would already know. So it’s exposition as detective work for those watching, and some questions remain tantalizingly unanswered. Also, new information about the health status of the different people in the room makes the oncoming horrible event that much more dreadful.

“Yes, yes, his ways are mysterious.”

Ruth has brought Robert along to meet Joyce for the first time at the funeral of their father Jack. The ground is frozen solid. No one can dig a proper grave until spring. So for the moment, Jack languishes in his coffin in the dining room. The meager Christmas tree still stands in the front room.  Robert is making a very awkward and bumbling first impression. Joyce naturally has her opinions on both him and Ruth’s first husband, and the way that marriage came unraveled.

“Oh good, this again. Don’t you have any board games?”

Farmhouse is a darkly funny experiment in both tension and suspense. Death comes when you least expect it.  Evil takes many forms, and most of them are unknowable. Had these three characters lived, it would have been a very different play.  But they don’t. And that’s Farmhouse.  Brace yourself.