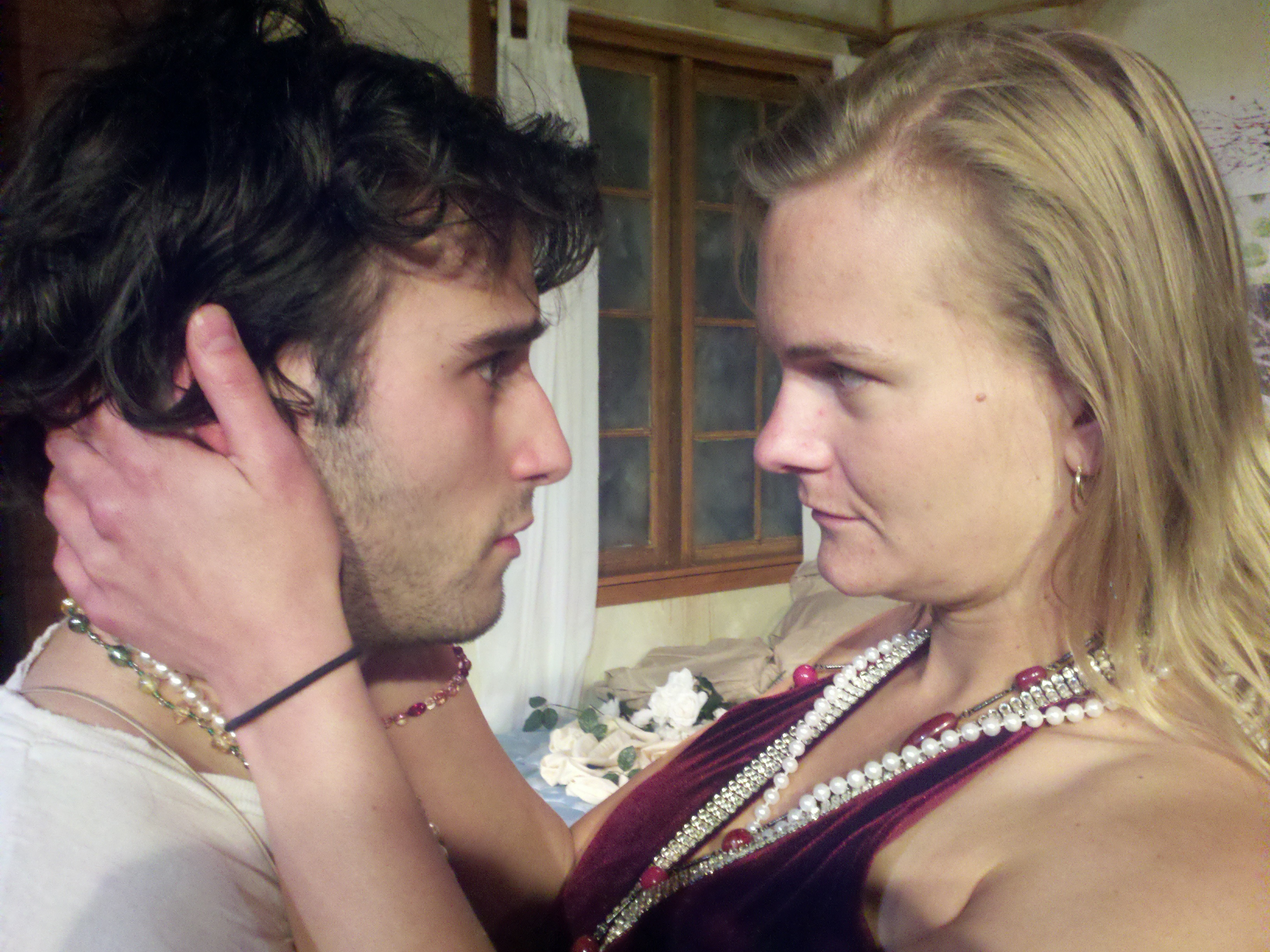 Oh my. Where to begin? This is…not good.

I ran into a couple of friends in the audience and when we emerged from the theater after seeing 20% Theatre Company’s production of That Face we all looked cautiously at one another until someone said, “It wasn’t just me, was it? That was bad, right?” No, my friend, it wasn’t just you. None of us wish bad theater on anyone, but sometimes it’s inescapable. Everybody eventually has an off day.

Much as it pains me as a fellow writer, I have to lay most of the blame for That Face at the feet of its playwright Polly Stenham. Apparently she wrote this play when she was only 19. That explains a lot, but I don’t think it excuses anything.

Is Stenham gifted? Certainly. There are some intriguing turns of phrase throughout the script. She has a facility with language, and sometimes even character and situation as well. And it’s not as if there isn’t tons of material to be mined from a dysfunctional family meltdown. Writers of all stripes in all media have been doing it for years. But what I might have chalked up to simply bad writing in an adult writer looks more and more just like a lack of life experience in this case. Now, five years later, Stenham might have written a much different play—one with more depth, more understanding, less repetition and cliché. The actors and director of 20% Theatre Company might have had more raw material with which to work. But theater company and audience alike have to play the hand they’re dealt here.

Martha (Mykel Pennington) is a drunk, and a little wobbly in the sanity department. Her ex-husband Hugh (Matt Greseth) has moved on and begun a new life and a new family halfway around the world in China. Left behind are Martha and Hugh’s two children. Mia (Lexi Duffy), 15, is off at a prestigious girl’s boarding school. Henry (Avi Aharoni), 18, has been his mother’s caretaker for the last five years. The last year and a half, he’s devoted even more of his time to this endeavor because he quit school. You can imagine how well that’s all working out. When Mia runs afoul of school authorities by participating in the hazing of a younger girl named Alice (Kayl Goldfarb), orchestrated by Alice’s partner-in-crime Izzy (Nikka Akingbasote), Dad gets called back to the States to sort things out, since Mom is off on another of her benders.

The actors struggle (in some cases valiantly) to inject some real depth and gravitas into the family conflict, but the script works against them at almost every turn. That Face will frequently show us something, and then the characters will discuss it, often several times, as if we haven’t already just seen it. Since it’s not the hazing of Alice itself, but the fallout from it, which is important, the entire opening scene with Izzy and Mia is unnecessary (unless you like seeing young girls tied up in chairs with ski masks pulled over their heads backwards so they can’t see—frankly, not my idea of entertainment). The hazing is recounted, in exhaustive detail, in several scenes which follow, including one in which Mia, Izzy, and Henry all visit an unconscious Alice in the hospital. Since the twisted heart of the show seems to live in the borderline incestuous relationship between mother and son, starting the play with Mia and two girls in her boarding school seems like a strange structural choice that only delays the real start of the play.

The episodic structure of the play is exacerbated by the production’s choice to cut to black after every scene and effect a scene shift—even though in all but one case it seems completely unnecessary. Ursual K. Bowden’s set design in the Minneapolis Theatre Garage space seems tailor-made to help speed things along, but the production decided not to take advantage, which I find baffling. The primary set—the bedroom where the mother and son spend an unhealthy amount of time together—is surrounded by vast stretches of blackness on two sides downstage closer to the audience. With the exception of Alice’s hospital bed, none of the furniture pieces for the restaurant or Hugh’s apartment or the hazing locale actually block the audience’s view of anything. So why not just leave all that onstage so you can crossfade out of one scene and into the next? They could have kept the momentum of the play going, and cut the running time down from 100 to almost 90 minutes simply by streamlining the flow out of one scene and into another.

The casting is also peculiar. Though all the actors do a credible job, they don’t look much like a family, or even the ages they’re all supposed to be. It’s strange I felt this way because both the women in the family were pale blondes, both men more dark in complexion, but the visual still didn’t help link them together. While Pennington isn’t afraid to allow herself to look rundown and worn out (and good for her eschewing vanity in the service of her character), she doesn’t look old enough to be Aharoni’s mother. Granted, that does make all the inappropriate physical closeness on her part that much creepier, but I had to keep reminding myself who the parent was (not in the way the script wanted me to, but literally in observing the actors in front of me).

Duffy and Akingbasote may in reality be very close to the ages of their schoolgirl characters, but the young ladies are both such statuesque runway model types that they actually tower over everyone else in the play—their supposed elders. Again, this makes it hard to keep the interplay of generations straight when they’re all in a room together. I keep thinking “college age” for all the kids, when it’s supposed to be high school. Only poor unconscious Alice really looks like the high schooler she is.

Where the play completely slips the tether of adult reality, however, is in its treatment of money. It’s hard to muster much sympathy for anyone but Hugh’s character. Hugh may have physically abandoned his family, but he is singlehandedly paying for all of them to continue living in the style to which they have unrealistically become accustomed. Martha isn’t holding down a job. So Hugh’s paying the rent on a ludicrously spacious (by New York standards) apartment, and for a woman to come in and clean once a week. The fact that mother and son choose to live in squalid conditions within this framework is their own fault. Hugh is also paying for the never-ending supply of booze and pills, and clothes and food, plus private schooling for both his children, an opportunity they both squander spectacularly. Let’s not even contemplate the cost of a last-minute plane ticket from Hong Kong to New York.

This is why TV shows like Gossip Girl and Brothers & Sisters fail to hold my interest. None of these people have real problems. They live in a bubble of privilege, insulated from the everyday issues most of us have to deal with, and so they create their own drama. Most of us would consider ourselves lucky to have a quarter of these characters’ living expenses available to us. Heck, a tenth. Shut up and appreciate your life. Come back to me when you’ve got something significant to bitch about. Serve a tour of duty in Afghanistan, live for a day in a refugee camp, or heck, just spend a night on the streets of New York with no roof over your head. White people with way too much time on their hands, and no sense of the clock ticking. In a way, of course, they’re deeply sad people. But mostly you just want to slap them.

Or, as someone seated near me did, laugh at them. When Martha is heading off to rehab and trying to do her best Blanche DuBois impression, stating, “A lady must have dignity,” someone nearby couldn’t help chortling. I don’t think that was the effect Stenham was looking to have when she wrote it, but the script is full of similarly awkward moments that don’t quite work out as intended. (Including the quote I nabbed for the title of this review. Poor Hugh, he got a little concerned about all the alcoholism, co-dependency, drug use, truancy and incest. As you do.)

I admire the impulse of 20% Theatre Company to take a chance on lesser-known works by modern female playwrights. But I can think of easily a half dozen local women who write plays with much greater facility. Yes, their scripts would be just as obscure from an audience’s standpoint. But I imagine a good play by local talent would end up being twice as satisfying. 20% Theatre has gone the local route before. I’d encourage them to continue pursuing it. Better plays by female playwrights are right in your own back yard.