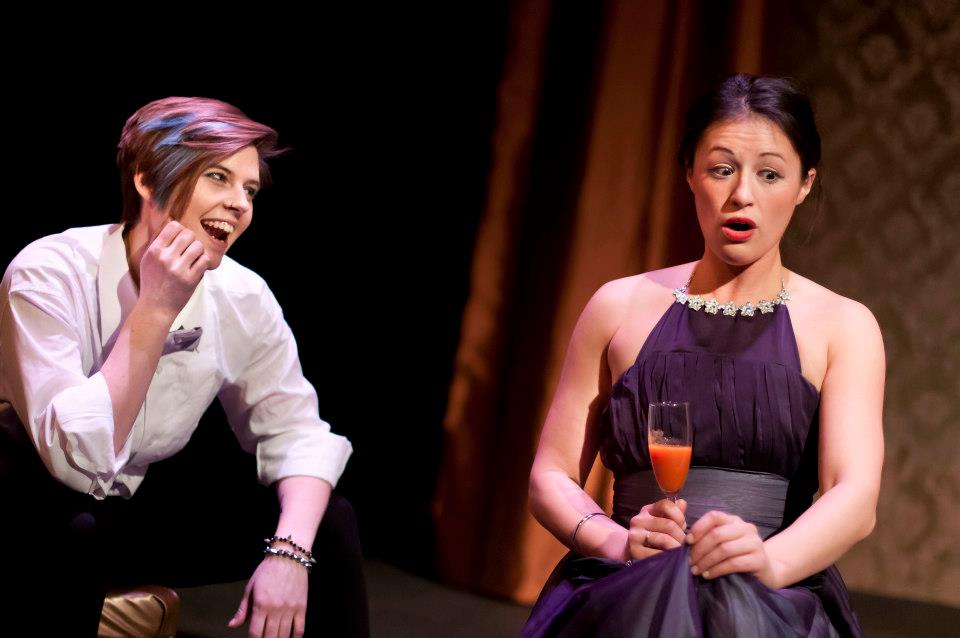 Harriet (Hannah K. Holman) and Emma (Kathryn Fumie) in Savage Umbrella's production of Emma Woodhouse Is Not A Bitch

There’s a friend with whom I try not to talk about my day jobs. Every time it comes up that I’m holding down both a full-time job and another part-time job, the friend inevitably asks, “How much longer are you going to have to do that?” The friend means well. But honestly, sometimes it’s all I can do not to say, “Well, you’ve got a partner with a second income helping support your household. So until I get myself a rich husband, or at least a gainfully employed boyfriend who wants to play house, I’m pretty much on my own to pay the bills. That’s how long.” Life’s expensive. Money is a touchy subject. If you’re not making enough money, then you’re viewed as not working hard enough, or you’re letting yourself be undervalued by others (both notions being, hopefully, bullsh*t, but there are days I wonder). Money shouldn’t be the measure of people. But people are human. And money matters.

Money is at the heart of Savage Umbrella‘s latest production Emma Woodhouse Is Not A Bitch. Money and status and class. It would be nice to think we live in a society without a class structure. But there’s upper class, middle class and lower class. There’s the 99 percent and the 1 percent. The 47 percent. Those that do the serving and those who get service. Those that make the messes, and those that clean them up. Savage Umbrella didn’t tackle a modern day riff on Jane Austen’s Emma because they wanted to do a romantic comedy—though there is a lot of coupling, and a lot of laughs. Savage Umbrella wanted to talk about money, and how talking about money makes most of us really squeamish for a whole host of reasons.

Savage Umbrella doesn’t just present a play here, they create an environment. It’s an environment you never leave from the moment you enter the building until the moment you exit. There are company members at the door to direct you upstairs. Everyone greets you with a smile and friendly demeanor, giving you more information than you probably need. They want to answer all your questions before you even think to ask them. They offer you a drink. Later, they offer you hors d’ouvres—several times. On every tray there is a little tip cup, with a dollar artfully placed inside. The mask never drops. This is a full-service experience with a play in the middle of it. Some people are comfortable being served. Some aren’t. Some people feel impolite if they don’t take something being offered to them. Some people wish they had cash on them for tips. Some people don’t think twice about it. The service environment is never directly addressed, it simply exists. How you respond to it, how it makes you feel, what it makes you think about, that’s up to you.

Of course there’s a story inside all this context, and a familiar one to those who’ve either read the book or seen the movie or TV versions (even Clueless). Emma Woodhouse (Kathryn Fumie) is a young rich woman who spends her time meddling in other people’s lives. When she’s not matchmaking, she’s trying to make someone over so they have a better shot at making it up a couple of rungs on the social ladder. She does this with only the best intentions, of course, and this is why you can’t hate her. She is, however, sometimes wildly off the mark and more than a little relentless. It’s a credit to Fumie that we only dislike Emma when she’s at her very, very worst. Fumie’s charm as Emma gets her a lot of slack from both the audience and all the other characters onstage.

The script, by Tanner Curl and Artistic Director Laura Leffler-McCabe, sets the action first at a wedding reception, then fundraisers for good causes on New Year’s Eve, and finally Valentine’s Day—all the events taking place at a the same “very nice hotel” (the boxy Cedar Riverside People’s Center space impressively transformed by designer Zac Campbell). The staff of the event get equal time in the story with the rich folk they’re there to serve. But since there are so many more well-to-do characters, their trials and tribulations (such as they are) are paramount. The one place the two worlds cross is when Emma takes on one of the servers, Harriet (Hannah K. Holman), as one of her projects, dressing her up and introducing her to all the right people. Harriet is more than happy to play along, much to the chagrin of her caterer girlfriend Bobbie (Parker Genne). But it fast becomes clear that Emma’s friends and associates don’t share Emma’s laid back attitude about mixing with the help.

The wedding reception is for a couple, Mark and Anne Weston (Charles Campbell and Sheila Regan), who Emma introduced—one of her success stories. The Westons act as a buffer and a safe haven for Emma when things go off the rails and she needs a reality check. Emma’s sister Isabella (Taous Claire Khazem) and Isabella’s husband John (Seth Conover) serve a similar purpose, though they’re less willing to sugarcoat their advice.

John’s brother George Knightley (Tanner Curl again) is (to the audience) obviously not just Emma’s partner in crime, but also her soulmate. But like any good romantic comedy, there’s a lot of ups and downs and disagreements before Emma and George realize this.  In the meantime Emma is fending off the unwelcome advances of the boorish Phillip Elton (Russ Dugger), and charmed by young Mr. Frank Churchill (Mason Mahoney)—who unfortunately for her already has a boyfriend of his own (played either by Carl Atiya Swanson or Bryan Grosso, depending on when you see it).

Rounding out the densely populated stage are: Millie Bates (Christina Lein) a good soul whose family has fallen on hard times, though she can’t seem to remember that when it comes time to spend money; William (Eric Elefson), one of Bobbie and Harriet’s long-suffering fellow servers; Jane Fairfax (Emily Dussault), who can’t help raining a little reality down on Emma’s makeover project of Harriet; and August Elton (Heidi Jedlicka) a hilariously inappropriate and vicious debutante who scoops up Phillip when Emma won’t have him, and then makes everything – including good works—a competition against Emma.

That’s a lot to juggle in one evening, but director Blake E. Bolan and the ensemble manage to keep all those balls in the air in a most entertaining fashion. In fact, if I have any quarrel at all with the production, I got more than enough for my brain, but not a lot for my heart. The script and the production do an amazing job of taking the complex topics of money and status and making them current and very present for the whole of the evening. The different levels of the subject are personified by the characters onstage, and their conflicts come from the conflicts brought about by differences in power. It’s all intricately and deftly plotted and performed. But in addition to my well-fed head, I found myself wishing I felt it just a little more in my gut.

Emma Woodhouse Is Not A Bitch is not a clinical exercise, by any means. It is not devoid of feeling. In fact, the moments that resonate most strongly are those where characters we’ve come to care about are humiliated in front of a crowd. It happens to Emma, and then she turns around and inflicts the same injury on someone else. I guess I’m also left wanting to feel the characters’ happiness as much as I feel their pain. What Savage Umbrella has already pulled off here is pretty stunning. That’s the trouble with setting the bar so high, and clearing it. A greedy audience always wants more.

That said, Emma Woodhouse Is Not A Bitch is great fun, a smart large ensemble romantic comedy executed with more style than a lot of theater you’ll see this year with much larger budgetary pockets. As always with Savage Umbrella, it’s time (and money) well spent.