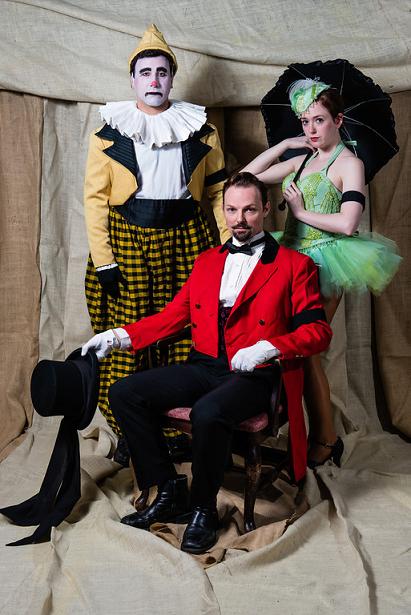 Turns out the story of the execution of a murderous elephant reveals a lot about people. In Theatre Pro Rata’s production of George Brant’s play Elephant’s Graveyard, it’s the early 1900s and the traveling Spark’s Circus comes to the mud-covered town of Erwin, Tennessee.

The parade through town goes horribly wrong when the lead elephant Mary turns against her abusive animal wrangler. The traumatized townspeople watching the incident decide they should be the ones to punish the elephant. The outnumbered circus folk feel they have no choice but to turn Mary over to small town justice. Humans being human, they find a way to botch the elephant execution, making it worse for all concerned.

“There’s nothing more lonely than a New Testament preacher in an Old Testament town.”

Elephant’s Graveyard may not sound like a fun night at the theater, but it was incredibly moving and I’m very glad I saw it. The play lasts less than 90 minutes and is a masterful example of ensemble storytelling. Director Amber Bjork has assembled a great cast of over a dozen performers, including a guitarist (Theo Langason, also listed as Music Director) and drummer (Shannon Foy) who add another layer of voice and sound to the richness of the story.

“Investments get tricky when the people want blood.”

I wasn’t entirely sure how they were going to pull this off. The stage is bare except for a small bench, and the platform for the musicians. Everyone talks about Mary the elephant, but we never see her. There is a simple string of lights draped along the back wall in the outline of a circus tent. A lot of the heavy lifting (you’ll pardon the expression) is done visually by the distinctive costumes (by Mandi Johnson) and evocative lighting (by Julia Carlis). The costumes set the period, and the lights follow the ebb and flow of the emotional arc of the story. The story itself is passed back and forth among all the members of the ensemble cast.

The strength of Brant’s script is matched by each of the actors, creating distinctive characters in just a handful of moments. The two worlds of the circus and small town America are sharply presented, with each personal facet of the communities adding up to a much larger whole. Keeping that kind of specificity going, both on the page and in performance, not letting it all blend together into one amorphous blob of “circus” or “America,” is incredibly difficult. It’s a compliment to both the play itself and Pro Rata’s production that they’re both able to keep things so precise and detailed. It’s easy to see why the company fell in love with this script, and their presentation of it honors that affection.

“The glow was gone. I feel like the church will be crowded on Sunday.”

As each person tells their part of the story, we learn just as much about them because of the way in which they approach the incident and share it with the audience. There’s the Ringmaster (Wade A. Vaughn) and Tour Manager (Sarah Broude) each conflicted but pragmatic in their own way about being stuck in an impossible situation in regard to their star animal performer. There’s the Ballet Girl (Emily Dussault) who performs with Mary the elephant and holds a special bond with her co-star. There’s the heartbroken Trainer (Neal Skoy), caring for the elephant right up until the end, the only one who can be trusted to lead her to her execution. There’s also the Strongman (Alex Stene) and the Clown (Ben Tallen), trapped in their stereotypical roles, frustrated in their efforts to find some small way to help in the face of enormous loss.

“No one else in the world is hanging an elephant tomorrow.”

The townspeople are an equally colorful bunch. The Marshal (Nathan Tylutki) leads the charge for vigilante justice, thinking that putting down an elephant will somehow reaffirm the greatness of the American spirit. The Muddy Townsperson (Kelli Gorr) thinks exacting vengeance will lift the curse of God’s displeasure off the town and make them clean again. The Preacher (Ethan Bjelland) finds calls for mercy and humanity in the situation fall largely on deaf ears. The Young Townsperson (Jillian Jacobson) approaches the spectacle with a child’s sense of adventure, but gets a lesson she didn’t bargain for. The Engineer (John T. Zeiler) and Steam Shovel Operator (Brian O’Neal) put their trust in man’s machines to win out over animals, but aren’t prepared for the power which their technology provides them. Watching the proceedings with a jaundiced eye is the Hungry Townsperson (Joy Dolo), who’s seen enough of man’s inhumanity to man to realize that an animal doesn’t stand much of a chance.

“You play your cards right, you got a friend for life.”

I’ll be honest, this scenario didn’t exactly scream “entertainment” to me when I first heard about it.  But then I kept hearing from actor friends I knew what a great script it was. They were right—it’s Pro Rata and Amber Bjork directing. So I figured it was worth a shot. Elephant’s Graveyard really grabbed me. In many ways it’s a dark, sad tale. But the kicker is that it isn’t bleak, and it isn’t cynical. In fact, the story ends up reaffirming the flawed humanity of every one of the characters involved, in ways you often don’t expect. And the unseen animals often end up seeming the most human of all. Though it’s clear-eyed about human failings, it’s still not without hope. Elephant’s Graveyard is powerful stuff and skillfully done. A little more good old-fashioned catharsis in the middle of a cold winter. It may not have a lot of laughs, but it’s good theater, and we can always use more of that.