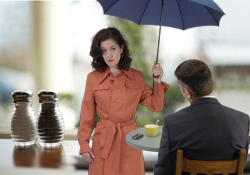 What a delightfully odd little play. That’s what I kept thinking to myself while watching Park Square Theatre’s area premiere of Sarah Ruhl’s play Dead Man’s Cell Phone. Intermission came and I had no idea how the play was going to end, or even where it was headed next—and that rarely happens. It’s nice when an artist’s storytelling can surprise you. Director Matt Sciple has recruited a stellar team of actors and designers to bring Ruhl’s quirky world to life, and they’re almost enough to paper over the script’s wobbly bits. An enjoyable, highly unusual evening of theater is so rare that I feel compelled to recommend it on that basis alone.

Describing Dead Man’s Cell Phone is tricky business because it’s such a strange potpourri of elements, all in such a delicate balance that one stands a very real chance of reducing it to less than the sum of its parts—or, worse yet, inadvertently convincing someone it isn’t something they want to see, when they very much should. It’s a comedy. But it’s also a tragedy. It’s outlandish and bawdy and wildly inappropriate. But it’s also inexplicably innocent and swooningly romantic. It’s grounded in reality, but takes off on wings of unexpected poetry that frequently took my breath away. It’s funny and deeply sad and defiantly hopeful, all at the same time. And I get the distinct feeling that only a team this good could pull the thing off.

Honestly, if it weren’t for the fact that I know Ruhl wrote it, I might have stayed away. Though Ruhl is a playwright they can’t seem to stop throwing awards at (MacArthur Fellowship, Pulitzer Prize finalist), the basic set-up for Dead Man’s Cell Phone is straight out of some basic cable Tori Spelling TV movie: “A call she should never have answered!”

When Gordon (John Middleton) repeatedly fails to answer his ringing cell phone, fellow cafe customer Jean (Carolyn Pool) tries to engage him in conversation in order to get him to shut the thing off. She soon discovers Gordon is dead. She answers the phone. Thus she gets sucked into Gordon’s life and eccentric cast of characters: his mother Mrs. Gottlieb (Linda Kelsey), his wife Hermia (Karen Wiese-Thompson), his mistress (Shanan Custer), and his brother Dwight (also played by Middleton). Each phone call sends Jean off in a different bizarre direction toward some other strange encounter. Even as this new life tries to assert itself around her, Jean’s addiction to answering the cell phone and learning more about Gordon’s life threatens to undo the new opportunities for love and family that she’s only just found.

Ruhl has given every actor a real chance to shine. There’s some amazing material in this script, and Sciple and Co. take full advantage. Linda Kelsey sets the bar for everyone else incredibly high early on with the delivery of one of the most peculiar and hilarious eulogies a mother has ever given onstage for her son. Just as you think she can’t say anything odder or funnier, off she goes again. Kelsey keeps this strange, sexy society matron one of the most compulsively watchable characters throughout the evening. Karen Wiese-Thompson gets the drunk scene to end all drunk scenes—including one of the more bizarre (yet strangely understandable) sexual confessions I’ve heard lately. Shanan Custer puts on a wacky foreign accent as the exotic Other Woman in Gordon’s life, and performs an even wackier fight scene in slow motion toward the play’s climax. John Middleton as Gordon’s bumbling brother Dwight transforms into an unlikely romantic hero right before our eyes. And when Gordon himself takes control of the play at the top of act two, narrating the last day of his life, Middleton shines even brighter, having the audience so completely in the palm of his hand that it takes them a while to catch on to the fact he’s talking about things they really probably shouldn’t be laughing at.

So I liked it. But with all this going for it, plus Carolyn Pool in the lead role of Jean, why didn’t I love it? It has to do with the character of Jean herself. She’s a cypher at the center of the play. Everyone else in the cast of characters has a history. We know who they are and what they mean to one another. But it’s as if Jean never existed before the play starts. We know nothing about her family, her job, her friends or her social life. Yes, in many ways we get the idea that Jean’s life only really starts on the day that Gordon’s stops. But it’s hard to understand where a character ends up, if you have no idea of where they started, to put it in any larger context. For starters, what compels Jean to tell ever more elaborate and escalating lies to all of Gordon’s loved ones, even if the lies are meant to give them comfort? Carolyn Pool does amazing work giving the character of Jean some depth. She brings the full strength and charms of her quirky stage persona to bear, enabling Jean to be what she needs to be, a strong center around which the rest of the show revolves. She’s the glue that holds the rest of the disparate ensemble together. Pool makes a whole lot out of the very little Ruhl gives her to work with, so my hat is off to her. Very few actresses could pull of that kind of a magic act.

Additionally, I think the scale of the production is off. The design overall works great. There’s really fine work on costumes from Ellen Roeder and Lyle Jackson (Tulle & Dye), and properties from Sarah Holmberg. Michael P. Kittel’s work with light and shadow is stunning, and I have a special place in my heart for any sound design (this one by Montana Johnson) that sneaks in Rufus Wainwright’s “My Phone’s On Vibrate For You” as the house lights dim. Michael Hoover’s set, as usual, is gorgeous, and uncharacteristically spare, but I also think, fantastic as it is with all its moving parts, it’s too big for the script. The set fits the funeral scene perfectly, as it is supposed to be set in a vast cathedral with a vaulted ceiling. The Park Square stage is a big one, and I understand completely the temptation to take all that space and play with it. But a lot of the charm and surprise of the play comes from the fact that these “small,” often just two-person, scenes open up into contemplation of enormous subjects—life, death, love, betrayal, medical ethics—which the script comes at from unusual angles with unexpected insights. Here, it often feels like the production is straining to fill up the space, rather than just exist as it is and be allowed to sneak up on us. “Pay attention! Big, big ideas coming!” I think I’d like the production better if, like the script, it wasn’t trying quite so hard.

Still, the laughs are plentiful, the sentiment earned, the romance believable, and the heart of this thing is as big as its brain. Dead Man’s Cell Phone—the script and the production—defies so many expectations, it could only be…