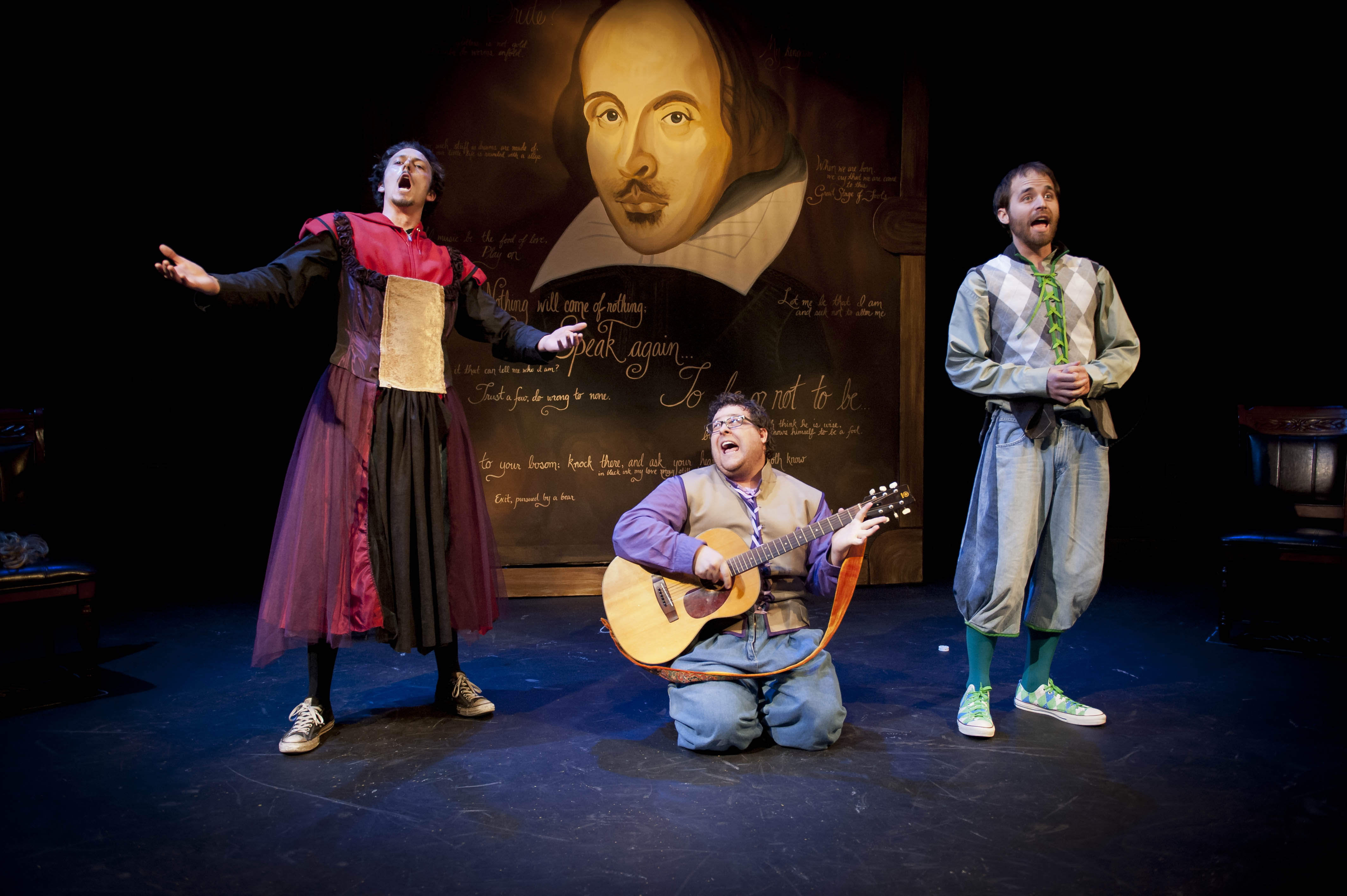 When I read the script for The Complete Works of William Shakespeare (Abridged) several years back, I laughed my butt off. Jess Winfield, Adam Long, and Daniel Singer skewer all of Shakespeare’s plays in a way only those that know and love him well can do. The comedy is all the funnier because of how smart it is. It is a relentless runaway train of parody that gets you laughing and never lets up.

“A nose by any other name would still smell.”

Swandive Theatre’s current production of The Complete Works of William Shakespeare (Abridged) embraces the goofy spirit of the text and then some. Bryan Grosso, Ryan Henderson, and Paul Rutledge are having a ball going way over the top with this pithy satire. They’re having so much fun you can’t help getting swept up in it. Also, you feel a little exhausted on their behalf. This thing’s a hilarious marathon. But they, and the audience, end up loving every minute of it.

“Shakespeare did not plagiarize! He distilled.”

Do you have to be intimately familiar with all 37 of Shakespeare’s plays to enjoy this? Not in the slightest. (For instance, I always thought it was 36, but I never really counted The Two Noble Kinsmen.)

Do you have to be a little bit of a theater geek to enjoy this? Probably. But I’d argue that anyone who goes to theater on even a semi-regular basis falls into that category. Can’t hang out in theater circles very long without running into some form of Shakespeare’s plays, straight or reshuffled.

For instance, the whole thing starts by sending up Romeo and Juliet, which has covered a lot of pop culture territory over the centuries. The entire second half of the evening is taken up with comically dismantling Hamlet, another Shakespeare classic it’s hard to avoid knowing about (even if it’s only “to be or not to be” and “get thee to a nunnery”). As one of the guys points out after a plot synopsis of Hamlet, “Dude, that’s The Lion King.”

In between, all the history plays are dispatched as a football game where the crown serves as the ball, and play-by-play commentary (no pun intended) dispatches one candidate for the royal throne after another. A large swath of the comedies are all bundled together in one epic romantic romp—because there always seems to be a shipwreck, a girl masquerading as a boy, or a couple of twins and mistaken identity involved in most of them, sometimes all three at once.

“Shakespeare, despite the plague of male pattern baldness, wrote…”

Shakespeare’s biography downloaded from the internet gets unfortunately interwoven with Hitler’s (politically incorrect but very, very funny). Othello devolves into a white boy rap sequence. Titus Andronicus is a devious cooking show.  Macbeth involves kilts, of course, and golf clubs (?). Proving their thesis that Shakespeare’s comedies aren’t nearly as funny as his tragedies, they neatly hit the highs and lows of Julius Caesar, Antony & Cleopatra, and even Troilus & Cressida in rapid succession. They also throw in a nod to the sonnets for good measure.

“I am so lonely and pubescent on this island.”

The handy thing about Shakespeare’s plays from a comedic standpoint is that when you lay out the bare bones of most of the plots, they do seem a little bit ridiculous. And that little bit of ridiculousness can easily be amplified to full-blown farce with the right energy behind it. All the Swandive folks have the right energy here.

The tireless actors are piloted nimbly through all this buffoonery by co-directors Meg DiSciorio and Damon Runnals. The thing could go off the rails any number of ways but the pace never flags. Ursula Bowden’s simple set mostly consists of an enormous imposing portrait of Shakespeare peppered with random quotes from his works. There’s a lot of traffic running behind that portrait for quick costume changes and random prop pickups. Lisa Conley’s costume plot takes the trio of actors from modern garb to peculiar pseudo-Elizabethan gear, with a whole lot of amusing accessories to distinguish the many characters. Those random props by Sarah Salisbury run from the expected human skull for Yorick to a whole lot of fake stage knives, sock puppets and inflatable light sabers.

“Call me but love and I’ll be new baptized.”
“Did you just say I should call you ‘butt love’?”

Just like the source material, there’s plenty of low brow humor to go with the high brow subject matter. It’s also ripe for current topical references to get thrown in at regular intervals (there’s an extended riff on the TV show The Vampire Diaries that’s most amusing).

The Complete Works of William Shakespeare (Abridged) is the kind of comedy where you actually feel smarter when you leave than when you entered the theater—and how often does that happen? You may laugh yourself silly, but it’s still Shakespeare after all.  Can’t argue with that unintentional payoff. Highly recommended.