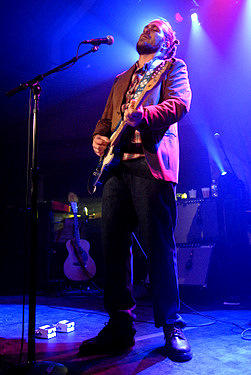 In a pop music landscape filled with ego’s the size of Kanye West’s and costume changes the likes of Lady Gaga’s, Citizen Cope’s stage presence, on display Saturday and Sunday night at Minneapolis’ Varsity Theatre, was a refreshing mix of humility, graciousness and of course, talent. Saying “thank you” several times between more songs than not, the crowd responded with enthusiastic cheers and applause, as though returning the favor. Sunday night’s set saw Clarence Greenwater (aka Citizen Cope) and backing band evenly disperse songs from the singer/songwriter’s entire discography throughout the show, from “Back Together” (off 2006’s Every Waking Moment) to “Comin’ Back” and “Let The Drummer Kick” (on his 2002 debut Citizen Cope) to his newest single, the redemptive and reggae influenced, “Healing Hands” (on his album, released in hard copy just last week, The Rainwater LP).

With the professional air of a seasoned touring veteran, song after song came out sounding nearly identical to their recorded versions, much to the delight of the crowd. Getting fans jumping (not an easy task for a Sunday evening show) with “Bullet and a Target”, “Brother Lee” and “Hurricane Waters” and swaying side to side with the upbeat “Pablo Picasso/ My Way Home”, the band hit their stride right out of the gates and after a solid 80 minutes said their first of two goodbyes.

Filling the newly refurbished (and still somewhat under construction) Varsity Theatre two nights in a row to sold out capacity, must have felt good for the newly minted label owner, and he let it show briefly, with a few sly smiles that gave at least the group of women standing behind me much to scream, and subsequently chat, about.

After a brief intermission and some awkward attempts at chants (“cope, cope, cope” isn’t the easiest to get into) the crowd erupted at the sight of Clarence Greenwood walking back on to the stage alone, with an acoustic guitar. Playing “Salvation” followed by “D’artagnan’s Theme” which got a steady clap backbeat from the audience, who finished singing the song for him, Mr. Cope went through two more songs including “200,000 (In Counterfeit 50 Dollar Bills)” before the band joined him back on stage to close out the night with “Sun’s Gonna Rise” and “Sideways”, throwing in a rendition of Neil Young’s “Out On The Weekend” for good measure. With a two hour set filled with beats, soul and plenty of thank yous, Citizen Cope left the appreciative crowd smiling and upbeat as they headed out into the warm-for-Dinkytown-in-March air.

To see a slideshow of the event follow this link http://blogs.citypages.com/gimmenoise/2010/03/citizen_cope_ge.php