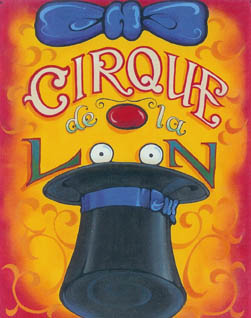 Cirque de la Loon from Fools Productions at the Lehr Theatre was a slightly schizophrenic viewing experience for me.

On the one hand, it’s a family-friendly show with lots of juggling, unicycles, and odd musical instruments. Toddlers and adults alike (myself included) were transfixed by the feats of gravity-defying goofiness going on all over the stage.

On the other hand, the production seems to want to tell a story…yet not tell a story. It tries to dissect the nature and origin of clowning, but from a mythic/fable-like perspective rather than a factual or historical one. The show isn’t interested in exposition or a throughline of a story, nor should it be. The bits and pieces of clown lore the audience receives are just another variety of performance. Instead of juggling or jokes or unicycles, we are imparted information in humorous fashion.

“What do these red-nosed rituals accomplish?”

Artistic Director of Fools Productions, and writer/director of this piece, Lloyd Brant has assembled a cross-section of students from his twenty years of teaching clowning with his wife Rosie Cole to create this first show in a series around the origin myth of the American clown. Brant says in the program that all the other cultures of the world have a clown origin story, except the United States. He wants to create a “mythic origin story of the clown for the American imagination.” It’s an ambitious set of marching orders no matter how you approach them. The current strange mix is either going too far, or not far enough.

“The questions aren’t going to get any easier.”

Cirque de la Loon works just fine as an entertainment. The Free Flying Fools—Stephen Birmingham, Nick Laffey, and Rebecca Yale—do a great job of both juggling and unicycling and are a lot of fun to watch. They are given character names in the program, but since they never really speak, and don’t have a story per se, I’m not entirely sure why. They simply spend their ample stage time doing things that I, bereft of the gifts or either coordination or balance, marvel to watch.

There are also two professors of clowning—Dr. Kronkite (Warren Hammond) and Dr. Schultz (Reid Belstock), with their vaguely Germanic accents—who discovered and studied a band of clowns in Iceland and brought them to the U.S. Hammond and Belstock are also skilled at juggling and unicycling, which they amply demonstrate when trying to break juggling down into its component parts. They also insert themselves into the routines of the Free Flying Fools throughout the night.

“Just how do you tickle a rib without invasive surgery?”

There’s a lot of talk of a plant that blooms in the form of red clown noses, but the story never comes into focus. The notion of where red noses comes from is a fun concept, but I’d be willing to wager the true story might be more interesting.

“Your mother is a glockenspiel!”

Also, there’s a dazzling grand finale under black light with the entire unseen cast juggling multicolored phosphorescent balls. It purports to be the origin of the universe and is a heck of a lot of fun to watch. But then the story peters out. In both this case and the story of the red nose, more concentration on the whimsy of the physical acts might end up being more successful. Either that, or more time needs to be spent bringing the script into sharper focus.

“My family comes from a long line of leper boat captains.”

Though the clown acts themselves are timeless, Cirque de la Loon seems intent on pinning its larger story in a historical framework. Our master of ceremonies is none other than P.T. Barnum himself (Johann Hauser). In a nod to the notion that everything goes in cycles, the Barnum framework is grounded in 1838, in the midst of the fallout from the economic panic of 1837. Times are tough, but we all need a little entertainment—more than ever, right?

The one element I haven’t yet mentioned is the clown band. Two members of the band have a sweet little romantic subplot going on throughout the festivities. Olaf (banjo player Ty Otis) woos violinist Melkorka (Maliya Gorman-Carter) with a heart-shaped balloon (which has a mind of its own). An uncooperative chair compounds Olaf’s innate shyness for a goofy but endearing courtship.

“You don’t even know what ‘relevant’ means, do you?”
“What’s that got to do with anything?”

Olaf frequently joins Barnum and the rest of the band for the most problematic element of the evening. The rest of the band consists of Patrek (Jovan Gorman-Carter) on tambourine, Frida (Karen Townsend) on accordion, and Brigid (Marina Wise) on a contraption that is part washboard, part high-hat, part cow bell, part car horn. They all sit down on chairs flanking either side of Mr. Barnum in his stovepipe hat and tails, all telling jokes with Barnum leading the discussion.

And this is where I had my musical theater flashback to The Scottsboro Boys.

The band is called the Minstrels of Mirth, and they are performing in the style of the old minstrel shows of yore. Turns out P.T. Barnum was a promoter of and performer in minstrel shows himself. If you don’t know why invoking the spirit of minstrel shows might be problematic, just do a quick internet search. I’ll wait. Yeah, that. So…

The interesting thing is that Barnum himself would inject some political content into his minstrel-show comedy. The man was also a crusader for the equal treatment of all people. Barnum may have built his career on displaying freaks and colored folks of many stripes for entertainment value, but it seems he always saw them as people, rather than property—which was forward-thinking of him, for a man in Barnum’s day. Don’t get me wrong, he was no Martin Luther King, Jr., but he seems to have been more enlightened than the average man.

To be clear, no one wears blackface. No one makes jokes with even the slightest racial connotation. But it’s a minstrel show structure. They even call themselves minstrels. And it’s P.T. Barnum in 1838. So Cirque de la Loon is going there, even though it’s not really going there—which is way too much freight to load on something that is striving to be an uncomplicated piece of entertainment with a little clown mythology thrown in the mix. If you don’t want to walk through that door, then don’t walk right up to it and turn the knob.

Brant and company seem content most of the time to simply fabricate their clown story.  In that spirit, I’d argue for untethering the clown mythology from literal American history altogether.  The master of ceremonies, just like the clown, is an entertainment archetype.  It doesn’t need to be P.T. Barnum (unless it needs to be P.T. Barnum). I’m not arguing for sanitizing either this show, or American history. But if it’s going to be a family show, then there are certain parts of American history, like certain parts of the Bible, and certain parts of Shakespeare, that you set aside for when only adults are in the room and you introduce kids to them at a later date. Or maybe that’s a complete crock.

It’s a clown show. It’s a variety show. It’s an entertainment. It works well on this level.

But I don’t think it’s trying to be. The show feels like it found this trip-wire by accident.

Certainly the toddlers didn’t catch the reference. Why would they? Maybe half the adults in the audience didn’t catch it. Maybe those that did, didn’t care. But part of me wondered what the young African American man in the front row thought of it. Or what the performers thought, seeing him there. But again, it feels like a big load to pile on the shoulders of a bunch of clowns balancing on a unicycle.

Still, if you’re gonna go there, then go there. And if you’re not gonna go there, don’t go halfway there and pretend there isn’t more. An invented mythology might be a safer way to address all of this anyway. People feel less uncomfortable if they can convince themselves it’s fictional. That’s how science fiction gets away with it all the time. Science fiction and fables and fairy tales are all treading the same ground. Who says you can’t tread that ground in oversized clown shoes?

“This country could use a few good clowns.”

Cirque de la Loon is fun. And maybe that’s all it needs to be. Your level of cognitive dissonance may vary.