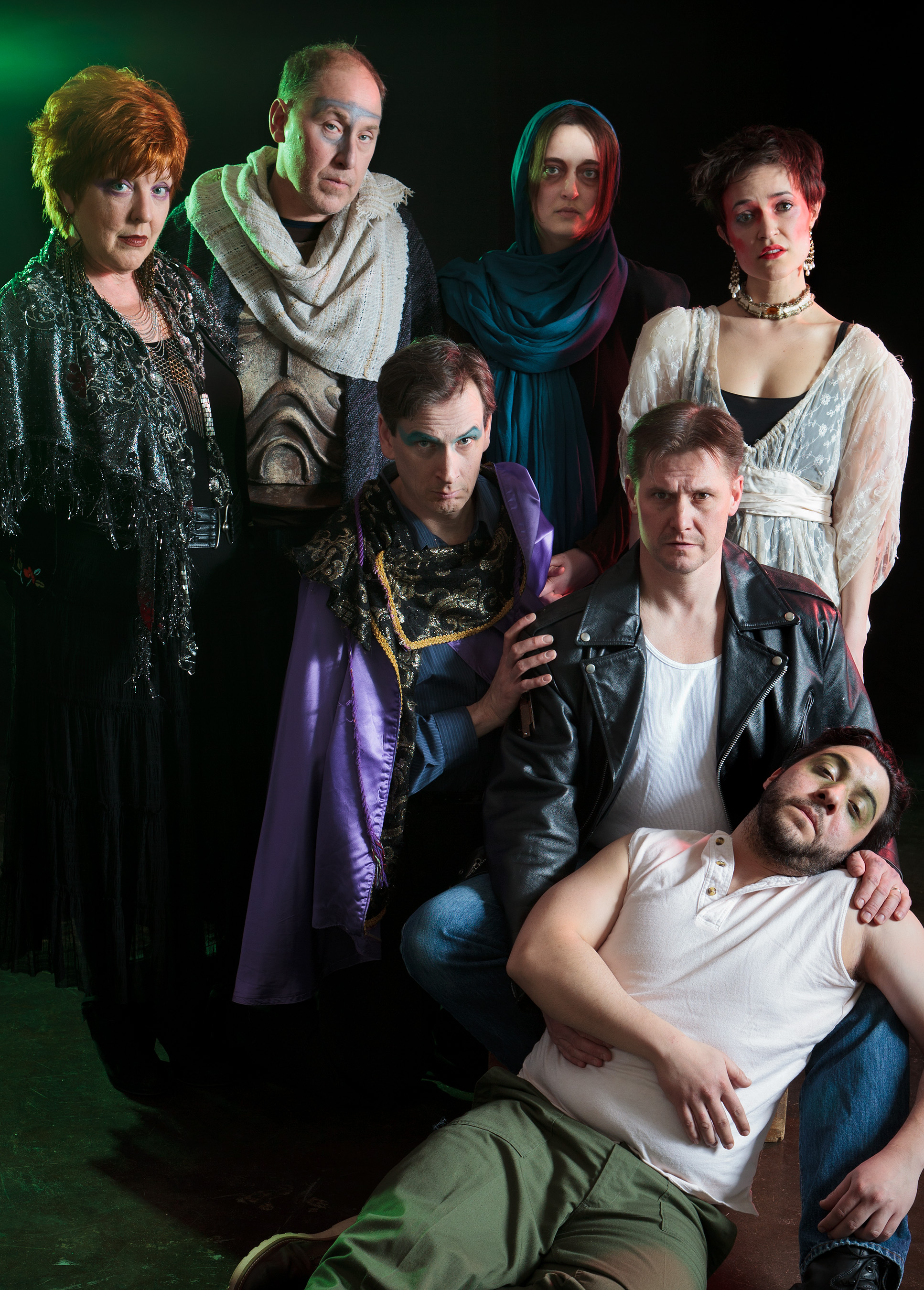 Follow me down the rabbit hole for a minute here: Don Quixote (Craig Johnson) is abandoned by Sancho Panza (Sam Landman) at the Camino Real, the one road into a surreal port city that exists out of time. Quixote bunks there for the night and has an extended dream, densely populated by characters from both history and fiction, as well as random comedic and ominous creations of the playwright Tennessee Williams. When Quixote wakes the next day, he will choose from among this ragtag assortment of people a companion to accompany him as his journey continues.

“Make voyages! Attempt them! There’s nothing else.”

“I’ve had so many unpleasant surprises, I’ve lost faith in my luck.”

Camino Real is overseen by the genteel but threatening Gutman (Alan Sorenson) and stalked by two street cleaners (K. Richardson, Riedlinger) in bright orange jumpsuits who regularly scoop up the dead and discarded and cart them off to who knows where.

“What can one man do with another man’s heart?”

Basically, stick every other Tennessee Williams play in a blender, slap on an extra layer of the supernatural, and you’ve got yourself Camino Real, the latest offering from the sterling crew at Girl Friday Productions.

Camino Real is one of those plays that’s either your thing, or it isn’t. It is certainly unlike any other thing you can currently see playing on Twin Cities stages, and that’s saying something. Tennessee really lets his freak flag fly on this one. His normally poetic dialogue is set loose to go galloping all over the place. People say impossibly beautiful and horrible things to one another.

“You’re not so young as I thought you were when I saw you last night on the terrace, in the candlelight.”

Director (also set designer) Benjamin McGovern and the Girl Friday ensemble fiercely embrace this deeply weird play. They can’t make you love it, but they sincerely hope you love it as much as they do. This is an offering placed reverently at the altar of Tennessee.

“Blue is the color of distance.”

As to whether or not this play is my thing, personally, I find myself oddly stuck in the middle. I spent most of my time watching it trying to figure out what the heck was going on—but not in a bad way. My brain was fully engaged, not frustrated. When I say “Tennessee Williams in a blender,” I don’t mean the play is incoherent. It has its own peculiar dream logic. As an audience member, I just never knew what was going to happen next, and it’s rare when that happens.

“This homeless ghost is your own.”

Camino Real is different in a great many ways from the previous Girl Friday outings (Street Scene and The Skin of Our Teeth), which I enjoyed unreservedly. The main way in which it differs is the way in which the mind digests it. As expansive and character-stuffed as all three of these plays are, Street Scene and The Skin of Our Teeth are easier to wrap your brain around in the moment. They stick with you over time as well, but there’s also an immediate payoff to watching them that is elusive with Camino Real.

“The violets in the mountains can’t break the rocks.”

Camino Real, like a great many Tennessee Williams plays, has the feel and texture of a novel. You have to commit yourself to taking it all in. The experience rewards you for having put in the time. You feel as if you’ve lived through something, and like most events in our lives, it starts to make more sense when you’ve had a chance to sit and ruminate on it a while afterward. Is it unsatisfying? No, but you have to be a little more patient for the “a ha” moment to kick in.

“Date of birth, and the place of that disaster?”

Speaking of patience, director McGovern and the cast are to be commended for trusting in the script, and the audience. Camino Real announces its structure—16 “blocks” (scenes) on the road, plus a prologue—and reminds us as each scene begins precisely where we are on the journey. One runs the risk of allowing the audience to think, “Oh dear, we have 10 more blocks left.” And though a character even says at one point, “The blocks go fast on this street”—they don’t. This isn’t theater for short attention spans. It’s a play from another era and it takes its time. So do the Girl Friday ensemble.

“Signs in the sky should not be mistaken for wonders.”

The production trusts us to be willing to spend time with these strange people in their otherworldly environment and not get impatient. The production fully invests in the characters and their fates, and we do as well. But it’s an act of faith to trust that is going to happen and not try to somehow “fix” the play and hurry it along. At two and a half hours, Camino Real is not appreciably longer than most plays, and there’s a heck of a lot more going on inside that time than in most plays, yet the pace is still a leisurely one—which adds to the dreamlike nature of the piece.

“My heart is too tired to break.”

There’s a great tension in Camino Real between the resilience of hope and the bleak reality of the odds against a happy ending. People believe in love and connection to other people in the face of overwhelming evidence to the contrary. Aging and death are a constant threat, and yet they don’t always win.

“I used to think a man couldn’t live without sex. But he can. If he wants to.”

“Time betrays us and we betray each other.”

As the two unlikely romantic pairings that much of the dream state revolves around, John Middleton and Kirby Bennett (as Casanova and Camille); and Eric Knutson and Sara Richardson (as Kilroy and Esmerelda) are odd pairings with real power behind them. Middleton and Bennett, despite their world-weariness, can’t completely give in to cynicism as long as they have each other. Knutson and Richardson manage to hang onto innocence even though they’ve also been around the block a few times before. These couples’ connections seem all the stronger just by existing  in spite of the fact that so much stands against them.

“Nothing wild or honest is tolerated here.”

An ensemble this strong resists the notion of scene-stealers. If someone grabs the spotlight in one scene, the next scene allows someone else to take it back. Still, there are some particularly colorful flourishes among the cast that must be noted. Sally Ann Wright’s gypsy mother grabs the mic with great relish to play mistress of ceremonies while putting her daughter on display. Laurel Armstrong is a quieter presence but her repeated appearances as the Mother of the Lost literally haunt this play from start to finish. Sam Landman’s Nursie refuses to allow us to take Kilroy’s predicament too seriously. David Beukema gets two stars turns with Baron De Charlus and Lord Byron and makes the most of both—two very different high-born men, who exist for only a scene in this play, but burn quite brightly from their grand entrances to their dramatic exits.

“All of us have a desperate bird in our hearts.”

Kathy Kohl’s costumes are key to holding this whole production together. There are a lot of characters, and the setting is very simple. Kohl’s costumes help visually distinguish each individual—be they leading role or background color—and help fill in the details of the environment as well. The choices are bold and detailed and specific to each character. Even though Williams’s play seems like a random grab bag assortment of people at times, the costumes make everyone seem to fit together even as they emphasize their differences.

“The forbidden word is about to be spoken.”

Sound and lights are the other key design elements here. Katharine Horowitz’s sound design constantly reinforces the strangeness of the world of Camino Real. Karin Olson’s lighting design matches the sudden tonal shifts and wild theatricality of Williams’s script (which are sometimes hard things to keep up with).

“We’re all of us guinea pigs in the laboratory of God. Humanity is a work in progress.”

The Girl Friday crew has chosen a tricky one with Camino Real. It’s a hard play to love, but it’s also a hard play to shake. The more I think about it, the more I like it. It’s the audience equivalent of a time-release capsule: it takes a while to work its way into your system. But I suggest you go get a dose and see for yourself. Highly recommended.