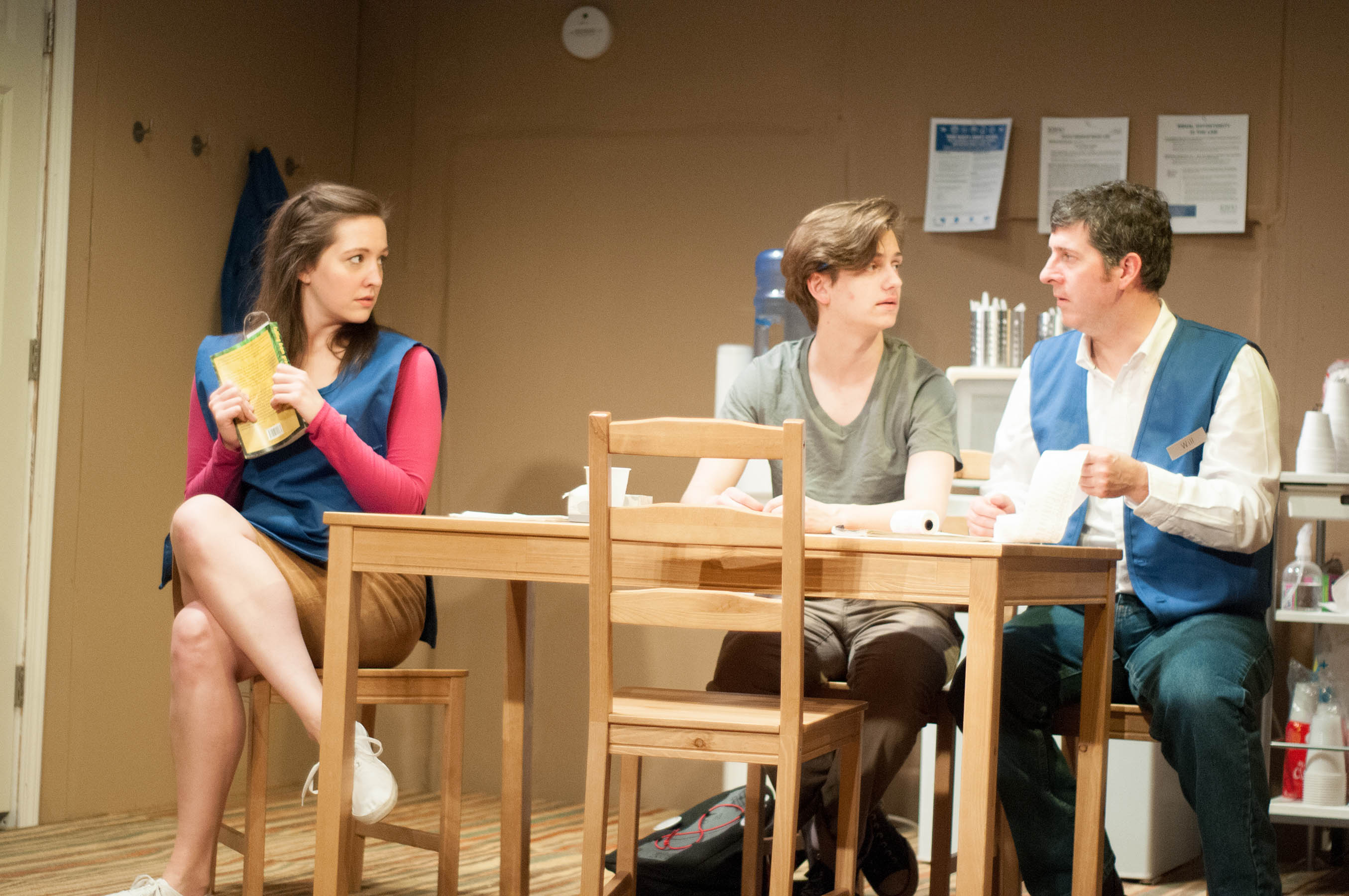 “According to my adoptive parents, he’s a child-beating Neo-Nazi, who’s dead.”

Half the fun of the experience of the play is the mystery of it, the uncertainty of it, frankly the discomfort I sometimes had watching it. In your mind as you watch it, you keep thinking of all the ways this thing could go horribly wrong, both within the play, and in the larger production. The sense of dread and possible disappointment are palpable at times. Not your typical comedy. Not your typical theater experience. That atypical theatergoing has as much to do with the wonderful performances director Natalie Novacek gets out of her cast as it does with the smart, strange, unsettling script penned by Samuel D. Hunter. If these actors didn’t dig into this text as deeply as they do, it wouldn’t be as funny, or as real.

The first thing we see is Will (Adam Whisner), out by the side of the road in the middle of the night, pleading for something. It will take almost the entire play for us to figure out what. After that brief glimpse of Will alone, we join him at a supremely awkward job interview with Pauline (Karen Wiese-Thompson) for a minimum wage job at the Boise location in the Hobby Lobby craft store chain.  Immediately, I begin to worry “oh please don’t let this be a play about soul-crushing day jobs. ”In fact, I have that worry about every character I meet in A Bright New Boise in the first few seconds that I see them. “Oh please don’t let them be THAT kind of character. I hate spending time with that kind of character.” Not to worry, just a minute in, each character ends up being so much more than I’m being tricked into anticipating. The play, as well, keeps dodging my expectations until at intermission I’m sitting there dreading what might happen next but I’m hooked. I have to know how it turns out.

“What else is there to believe in?”

In rapid succession we meet Will’s new co-workers, all of whom end up being connected to him in ways you don’t expect. Troubled teen Alex (Spencer Harrison Levin) tries to get a grasp on his jumbled life with the help of music. Anna (Anna Hickey) yearns for solitude almost as much as she yearns for a connection to Will. Leroy’s (Zach Garcia) habit of forcing people to confront uncomfortable things as part of his “art” is right at home in this stew of people who have a host of things they’d rather not talk about.  Leroy’s conversational weapons are most fiercely deployed, however, when he feels he’s protecting his family.

“You are going about this in the creepiest way possible.”

At its heart, A Bright New Boise is about family, and about faith. Not just faith in God, or in a particular church, but faith that life can get better, that there is still a sense of possibility, rather than futility. What defines a life well-lived with purpose, as opposed to one of wasted potential? A Bright New Boise doesn’t ask small questions. They’re the sort of questions you take out of the theater with you. The play provides answers about plot and character but it doesn’t pretend to know the answers about life. So A Bright New Boise is neither unbelievably hopeful nor unforgivingly bleak. It ends up sitting in a place where life—your life, as well as the characters’—could go either way, and we all have to make a choice. It’s an intriguing play with which to start the new year because it feels like a challenge.

“Is your pastor in jail yet or is he still awaiting trial?”

I’m grateful as ever for the presence of Karen Wiese-Thompson as Pauline because not only can she always be counted on for copious amounts of laughter, but she imbues her store manager with exactly the sense of purpose that so many of the other characters are lacking. Pauline’s life is the kind we’d be tempted to think of as small, but here we see and understand her significance. It’s one of many examples in Hunter’s script where we begin by underestimating a character and end up admiring, or at least better understanding them.

“Feed your uselessness. Clown of clowns. Nation of tears. I am hungry.”

A character like Anna, bouncing from one low wage job to another, unable to build a life of her own, could seem pathetic, but in Hunter’s and Anna Hickey’s hands she is not so easily dismissed. Leroy could just be a self-important jackass, but the way he’s written and the way Zach Garcia performs him, that attitude is used to help his little brother survive. Alex could very easily be a stereotype of an alienated teenager, but the script and Spencer Harrison Levin’s investment in his character’s desperation make him a boy you want to turn away from, but can’t.

“I think I rushed my introduction a little bit.”

A Bright New Boise wouldn’t work at all, however, without Adam Whisner’s performance as Will. It’s remarkable the way he can portray a character that is so withdrawn while still making it clear just how much is going on under the surface. Will is a man who has had the foundation of his life dismantled and is trying to build a new life with the few pieces of belief, dignity and meaning he has left. He doesn’t take the job at Hobby Lobby because it’s his only option. He takes it as the first step in reconnecting with his life, which is the first of the play’s many surprises.

“There are greater things in this life. There have to be.”

There, of course, the theology kind of falls apart for me, and my only regret about A Bright New Boise is that there isn’t someone of equal weight on the other side of Will’s argument when someone finally sets him off. Because Will’s point about the church, that it’s just a bureaucracy that stands in the way of people having a direct relationship to God is, to put it politely, bullsh*t. But no one ever calls him on it.  If you’ve got a Bible or a Torah or a Koran and you can get on your knees, you have a direct line to whatever God you believe in. If you choose to abdicate that place in your relationship to the Divine or hand it over willingly to someone else to dictate things for you, that’s still your choice. It’s a passive one, and an avoidance of responsibility, but it’s still something you choose to do. The only walls that exist are the ones you construct. It also seems like the height of laziness to me to give up on the world just because it’s dirty and complicated and you wish there weren’t so many other people in it that needed something from you and demanded you participate in your own life. All kinds of people argue that life is a gift, but so few people have the nerve and strength to actually live it.

A Bright New Boise shoves all of that, and more, in our faces. I wish it had a little bit more faith in the notion of faith, but the play’s a lot smarter and a lot funnier than many a play that’s toyed with similar ideas. That’s probably why Loudmouth Collective it doing it. And it’s definitely a reason you should see it.