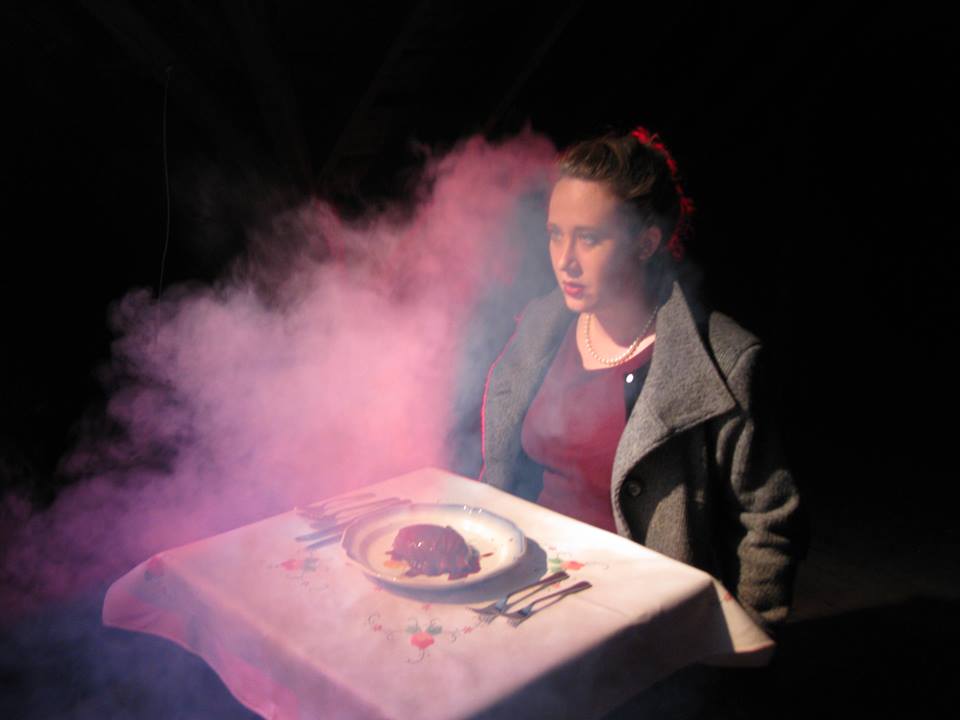 As theater goes, Body House is a weird one. But that’s probably why I like it so much. First off, it doesn’t take place in a theater, it takes place on the second floor and the attic space of a house converted into two separate apartments. (The downstairs neighbors are being extremely good sports during showtimes. The exact location is revealed when you purchase your ticket—and there’s only room for six people to attend any given performance.) And don’t worry, there’s a guide waiting at the front door so you know you’re in the right place. They run you through the rules of how things are going to go before they take you upstairs. Sort of a site-specific usher.

Second, there is no “off stage.” The four actors are performing the entire time, whether you happen to be in the room with them or not. The audience is free to wander and position themselves wherever they like in order to watch the action unfold. The audience doesn’t interact with the cast in any way, so you can walk right by them, doesn’t phase them a bit. It’s their story and you’re just passing through as an observer. There’s only so much room, so occasionally they may have to move you out of the way, but you just roll with it. You’re not totally without mooring, though. The actors in Body House make it clear where the primary attention is supposed to be in the house at any given time, and the second floor is small enough that, even if you’re hanging out in another room, you can hear things just fine and follow along.

There are four relatively distinct “parts” to Body House, though the boundaries between them are fairly porous. Prior to the actual start, a pregnant June (Andi Vargo) is in the kitchen making pancakes and listening to Patsy Cline. Her partner Solomon (Justin Caron) is in an easy chair in the main room sketching the plans for a rocking horse. Across the room on the couch, Jim (Timothy Otte) is plunking out a melody on a toy upright piano. In an adjoining room, Alice (Blake E. Bolan) is hanging things from a net stretched just below the ceiling—there are small handwritten notes, pieces of mirror, paper and plastic fish, tiny human skulls, and ribbon among other things. As Patsy Cline finishes up “Today, Tomorrow and Forever,” the clock hits the hour and it’s time to begin.

We begin with “Heart Piece,” in which Alice quite literally offers Jim her heart, stage blood and all. She, of course, demands that he reciprocate, but she’ll have to help him pry it out of his chest first. That may sound gruesome, but it’s merely odd, because in the dream logic of this sequence, you can survive without a heart in your body. It’s a strange bit of reluctant, vaguely passive-aggressive courtship but it lays the groundwork for what’s to come. Meanwhile, June sets the table, brings out the pancakes and she and Solomon set to eating. When the heart work is done, it’s simply time for them to leave the table, and get out the bucket and mop to deal with the stage blood.

where Jim and Alice disrobe and change clothes while also washing off the blood in a basin of water. June joins them in incantations and meditations on the nature of what happens to the body after death—how it dies, how it is prepared, what parts stubbornly refuse to decay, and how we end up just a bundle of bones. Meanwhile, Solomon turns on a distorted version of Patsy Cline’s “Today, Tomorrow, and Forever,” shot through with some electric guitar riffs and a persistent heartbeat. A tip of the hat to Ted Moore’s sound design, wonderfully creepy.  Solomon also lights some candles so he can dance with June later.

which turns out to be a video of her eating a human heart. The  video also shows Jim and Solomon elsewhere digging—digging a grave, trying to dig up something, it’s hard to tell. They do run across a heck of a lot skulls, however, animal as well as human. Ted Eschweiler’s video design is sharp and saturated in color and light. It’s only because I didn’t want to miss any of the video myself that I didn’t venture up to the attic at the time. I was told that a wordless scene transpires up above when Jim climbs the stairs and Solomon follows.

But fear not, we adjourn to the attic anyway for the final segment, “Burning Pianos” (it’s cold up there, wear your coat). An older Jim and Alice sit in rocking chairs, watching the fields burn. They ponder the vagaries of their friends about to give birth, the new seed to be planted in the fields, and an old nightclub that also succumbed to a fire itself, among other things. And Patsy Cline returns again to sing us out from the kitchen below, with June singing along.

Body House is more of a poem than a script with a plot you could follow. And I’m not entirely sure it could work in a standard theater environment. The text itself is distancing enough. If there was physical distance imposed by an actual fourth wall, I think it might be hard for the audience to engage. So this kind of intimate treatment, where the words and characters are literally right in front of you, works perfectly.  It’s hard to tune out or think of the people involved as less than human—no matter how odd they behave—when they’re “right there.” It’s also slightly discomfiting, but again I think that’s also deliberate. Taking place, as it does, in a confined space on a dark winter’s night you can see through the windows, the claustrophobia of the experience is heightened. All four actors are incredibly self-possessed and focused.  Never does our presence as an audience seem to throw them, or even register. They simply exist inside this strange little story until Patsy Cline sets them free.

Body House is written by Megan Clark and directed by Gwethalyn Williams, both Kansas natives. Clark has just moved here, and Williams was visiting. Body House is their first performance offering to theater audiences here, and it’s a different and intriguing way to say hello.

Looking to put yourself quite literally in the middle of the action? Then Body House is the play for you.