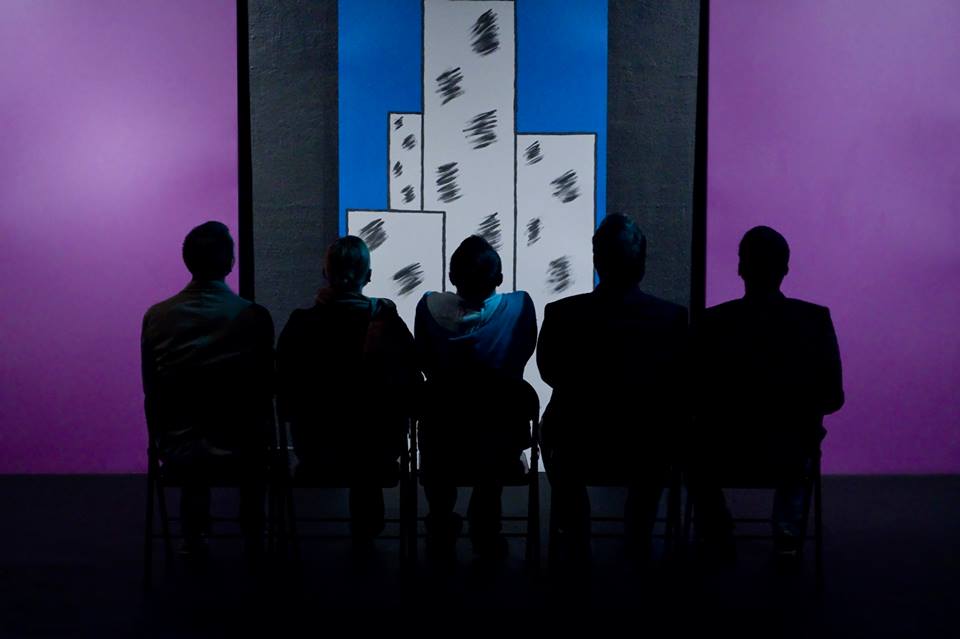 BOOM! Theater (that’s their name, I’m not shouting) is offering up their second production, the regional premiere Roberto Aguirre-Sacasa’s comedy Based On A Totally True Story. Aguirre-Sacasa’s resume includes (I’m not making this up) Marvel Comics, the musical Spider-Man: Turn Off The Dark, and the TV series Glee. None of which accurately predicts what you’ll experience with Based On A Totally True Story, but doesn’t it make you curious?

“Cut the shipwreck, add a nightmare, don’t cut the jellyfish, we love those.”

I missed BOOM! Theater’s first production last year because I had a play of my own going on at the time. I’m really glad I finally got a chance to see them in action because they delivered just what I expected, and what I imagine they’ll become known for— producing strong new scripts full of powerful performances. Which is saying something because Based On A Totally True Story is exactly the kind of script that normally makes me roll my eyes so hard they’re in danger of falling out of my skull—the personal and professional trials and tribulations of a successful writer. As my friend who attended the play alongside me said, “When he said he was twenty-eight years old, I wanted to slap him.”

Based On A Totally True Story introduces us to Ethan (Patrick Kozicky), who writes The Flash for Marvel Comics and serves as the dual narrator alongside his soon-to-be long-suffering boyfriend Michael (Joe Bombard), also a writer, who gets paid for his work as a journalist while he works slowly on a novel. Ethan also writes plays, one of which catches the eye of Mary Ellen (Amy Schweickhardt), a Hollywood producer who sees its potential as a horror film. Ethan gets to write the screenplay, but he has to write it fast. Meanwhile, Ethan’s father (Joe Wiener) is using his son as a reluctant confidante for the fact that Ethan’s dad is cheating on Ethan’s mom with another woman. Can Ethan be a good son, a good boyfriend, a good comic book writer, and a good fledgeling screenwriter all at the same time? Of course not.  In fact, he screws nearly all of that up spectacularly.

“One dead kid is OK but two dead kids is like, ‘What’s your problem?'”

You have to hand it to Aguirre-Sacasa. Ethan is the stand-in for him in this play and he doesn’t shy away from anything that would make Ethan unsympathetic. Ethan is a jackass. A hilarious jackass, but a jackass nonetheless. And while Michael isn’t an idealized perfect boyfriend straight out of a fairly tale or anything, he is a genuinely nice, decent guy. Michael puts up with all manner of Ethan’s ridiculous behavior because he loves the guy. As a fellow writer, Michael understands Ethan and is just hoping against hope that this is just a rough patch brought on by an insane set of deadline pressures that’s going to pass and not the new normal for their relationship. Unfortunately for both of them, he’s wrong.

“He forgets what he did sometimes for days on end.  But its always there.”

Normally I would hate a play like this with the white hot intensity of a thousand suns but BOOM! Theater won’t let me. Neither will the playwright. The script is so sharp and entertaining that the fact that it’s the very definition of “first world problems” refuses to stick in my craw. If you make me laugh and you make me care, it’s hard for me to continue resisting.

“Nobody likes Canada.  Nobody knows where it is.”

The script makes me laugh, but it’s the performances that make me care. Director Callie Meiners gets some amazing character work out of this ensemble. When Kozicky and Bombard as Ethan and Michael argue, it feels real. Their emotional distress looks as if it’s physically hurting them. The rawness and honesty that’s binding them together and tearing them apart often seems so real that I almost feel like I shouldn’t be watching, that’s it something too private for an audience to be gawking at. These two actors have shared a stage many times before and that history between them allows them to create something visceral and real between their characters.

Throw Amy Schweickhardt into the mix as Mary Ellen and I’d recommend the production just on the strength of those three performances alone, even if I finally did find a way to hate the script. Here again the writer hands the actor a gift and Amy just runs with it. She is funny literally every time she opens her mouth. Every time she appears onstage, I start smiling because I know I’m about to have even more fun than I was already having. The playwright somehow manages to embrace all the cliches we’ve come to expect from the Hollywood producer stereotype and then turn them on their ear. At the end of the play, Mary Ellen admonishes Ethan to enjoy their premiere because he wrote something and they turned it into a movie, “That. Never. Happens!”  The joy on Schweickhardt’s face in that moment tells you all you need to know about why someone would subject themselves to the meat grinder of the movie business. Every now and again, against all odds, it works out. The periodic tiny miracles keep you slogging through the crap in search of the next one. The representative of Hollywood in the play actually turns out to be the wisest and most well-adjusted one of the bunch.

This isn’t meant to discount the other two performers in the story, though. Joe Wiener as Ethan’s dad brings a welcome dose of, well, someone who isn’t a gay writer living in New York City making their living off art. Ethan’s dad is as suburban and subdued as his son is histrionic. As much as he drives Ethan crazy, he also can bring Ethan up short with simple praise the way only a good dad can. Both men’s relationships may be screwed up, with each of them doing most of the damage, but at least they have each other.  Marty Moreno rounds out the ensemble playing multiple roles, the most fun of which is Ethan’s boss Tyler at Marvel Comics. Put the words “dude” and “bro” as descriptors in the same sentence, and you have the essence of Tyler. He’s a bit slow, perhaps even a little stoned, but he’s a lot of fun to watch as the other half of a conversation with the manic Ethan.

“Some good, some bad.  A couple scrape greatness.”

So, much as it surprises me to say it, I’ve got to recommend Based On A Totally True Story. The combination of clever writing, good direction and solid performances make it an enjoyable evening from a company I’m looking forward to seeing more of. If it doesn’t sound like the kind of story you’d want to see, just remember, I wasn’t expecting to like it either. And yet I do.