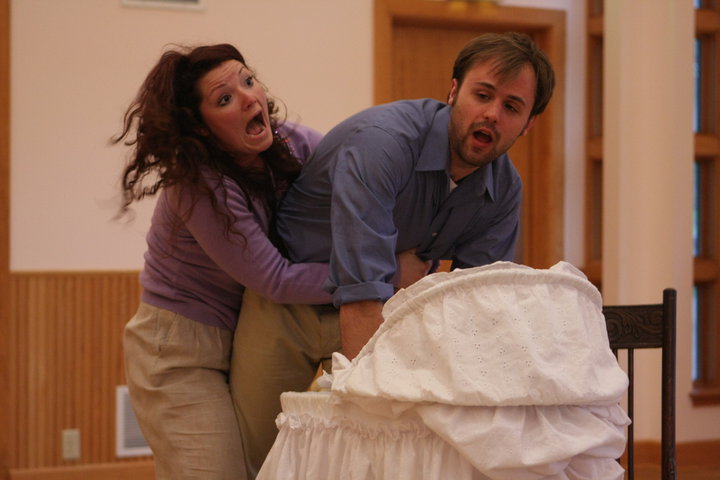 It’s not every day you get to watch someone drink vodka out of a duck’s rear end.

But then, this is a Christopher Durang play, so any absurd thing is possible. Durang’s outrageous satire about parenting, Baby With the Bathwater, is the current production from the brand new Prospero Theatre Company (their first production, the very different Eurydice by Sarah Ruhl, was just presented in February). It’s being performed in a Quaker meeting house, which is lovely, easy to find, and full of light—and I’m sure, on the nights this show isn’t playing, much, much quieter than on the nights it is.


I have kind of a love/hate relationship with Christopher Durang plays. On the plus side, they’re all extremely funny. The friend who accompanied me to the Prospero production laughed a lot, and he’s not one of those people to laugh out loud. I laughed a lot, too. Also a plus, the comedy is always a combination of lowbrow and highbrow: the man namechecks everything from The Brothers Karamazov and A Doll’s House to Mommie Dearest and The Thorn Birds. On the down side, the satire is so razor-sharp that while it’s funny, it also runs the risk of seeming unrelentingly bleak. Nothing is off-limits, nothing is sacred. Religion, child abduction, marriage, unemployment, sex addiction, alcoholism, child abuse, infidelity, gender identity disorder, psychotherapy, infanticide—you name it, if it’s even tangentially related to parenting, Baby With the Bathwater makes fun of it.

Helen (Laura Mahler) and John (Mike Davidovich) are right up there in the Hall of Fame for Worst Parents Ever Portrayed On Stage alongside Medea, and the Tyrones from Long Day’s Journey Into Night. Helen and John mean well. They’re just completely self-centered and inept. They can’t even correctly identify their baby’s sex. It’s a boy, but they dress him like a girl and name him Daisy. Their nanny (Jane Hammill) is abusive and oversexed (and never seems to age). A strange woman named Cynthia (Sarah Howes) wanders in off the street with her baby-eating dog and ends up kidnapping Daisy, before being hit by a bus.

The women who watch their children at the playground (Kasey Scarpello, Sara-Marie Reinke) are no help. Neither are the well-meaning teacher Miss Pringle (also Reinke) or school principal (Dorian Potter) who dabbles in black magic and abuses her male secretary. When Daisy (Andrew Eckhardt) comes of age, he seeks the help of a therapist (D.L. Diltz), who sits in the audience from the beginning of the show and then pipes up with his therapy questions when the scene arrives. And it’s a hilarious epic scene, leapfrogging forward through time from Daisy at age 17 in a dress to Daisy at age 27 in men’s business attire, still in search of a good boy’s name for himself. At his (of course) disastrous 30th birthday party, Daisy announces to his parents that he’s about to become a parent himself—with Susan (Sarah Howes again), one of his many, many, many sexual partners (the majority of whom were not women).

Director MaryLynn Mennicke and her cast deserve a lot of praise for embracing the play on its own very weird terms. It’s incredibly easy to do Durang scripts wrong, because they require a kind of fearlessness in performance that a lot of actors just don’t possess. You can’t be afraid to look foolish. You can’t hold back. Durang attacks people and issues using comedy as a blunt instrument, and you can’t pull it off going only halfway. I’ve seen a production of this same play in the recent past that didn’t work precisely for these same reasons. But the Prospero actors and this director fear nothing. They get it right, even if it means going just a little nuts to get there. From physical comedy to vocal acrobatics, they always seem to have some odd unexpected trick up their sleeve that takes the lunacy to the next level. (And while contemplating that paragraph, I just talked myself up from a 4 to a 4-1/2 star rating—out of five—for this production.)

One other really nice touch that’s worth noting is that in addition to standard (well-executed) sound effects, music/sound designer J.P. Kostecki also plays live piano (and, I think, guitar) for many of the scene shifts. It was such a welcome change of pace from your standard scene change accompaniment that I found myself missing it the one time a pre-recorded song was piped in instead. There’s something about live music breathing along with the rest of the production that really kept me engaged between scenes. Nicely done.

There’s not a traditional happy ending, of course. But there is hope. After all, as the therapist points out, at some point, no matter how bad your parents were, you have to get over it. Otherwise, you’ll never be an adult, you’ll just be someone’s kid. And with such a stellar bad example to which to compare his own efforts, Daisy stands a much better chance of being a better, if awkward, parent. Learning how to hold a baby, and coming up with less satanic lyrics for a lullaby, is a start.

If you want to see Durang done right, I highly recommend you check out Prospero Theatre Company’s Baby With the Bathwater. Then call your parents and thank them for not being Helen and John.