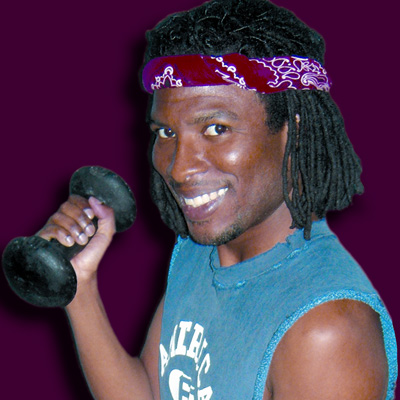 “And what was the reason you decided to take action today?”

Seeing one of Les Kurkendaal’s solo shows is like hanging out with a good friend who knows how to tell a good story, and “The Attack of the Big Angry Booty” is no exception.

This litany of Les’ encounters with clients at his day job – program director for the Jenny Craig diet program – could have merely been an infomercial. But woven into the tales of others’ struggles is the story of Les’ own battle to get his weight, and health, under control. Les knows how to portray these people with dignity, because he was reaching for that same dignity himself.

Single White Fringe Geek (and Mom) is the blog of Matthew A. Everett, one of five bloggers covering the Minnesota Fringe Festival for the Daily Planet.

Les’ job is as a floater, which means he moves from office to office, never in the same place for very long. This means he gets a lot of the beginnings and middles of people’s stories, but rarely the end. This creates a challenge for the larger show in some ways. Les’s own personal payoff is almost the only one we get.

If Les weren’t as good as he is at creating the rogues gallery of characters he meets along the way, things might get confusing or repetitive. This could have spiraled down into just making fun of fat people, or over-sentimentalizing the struggle with diet and exercise. But Les has a good instinct for knowing how to balance the ridiculous with the heartfelt, and nice attention to personal detail.

It feels like the production could use just a bit more of a driver moving the story forward, beyond Les’s personal progress. Whether that’s more time with fewer clients, or more of a sense of Les’s trajectory – in or out of the day job – I’m not sure where the solution might lie.

However, “The Attack of the Big Angry Booty,” strikes such a basic chord with so many people crossing the threshold of the theater that, overall, it’s a very satisfying experience. If you want to have a good time, just kicking back and taking in a good story, “The Attack of the Big Angry Booty” is an attack you to which you should willingly submit.

You can find more information at www.myspace.com/leskurkendaal

Entering his sixth year of blogging about the Minnesota Fringe Festival (and bringing Mom along for the ride as a guest reviewer), Matthew A. Everett is also a local playwright and three-time recipient of grant support from the Minnesota State Arts Board. Information on Matthew and his plays can be found at matthewaeverett.com.