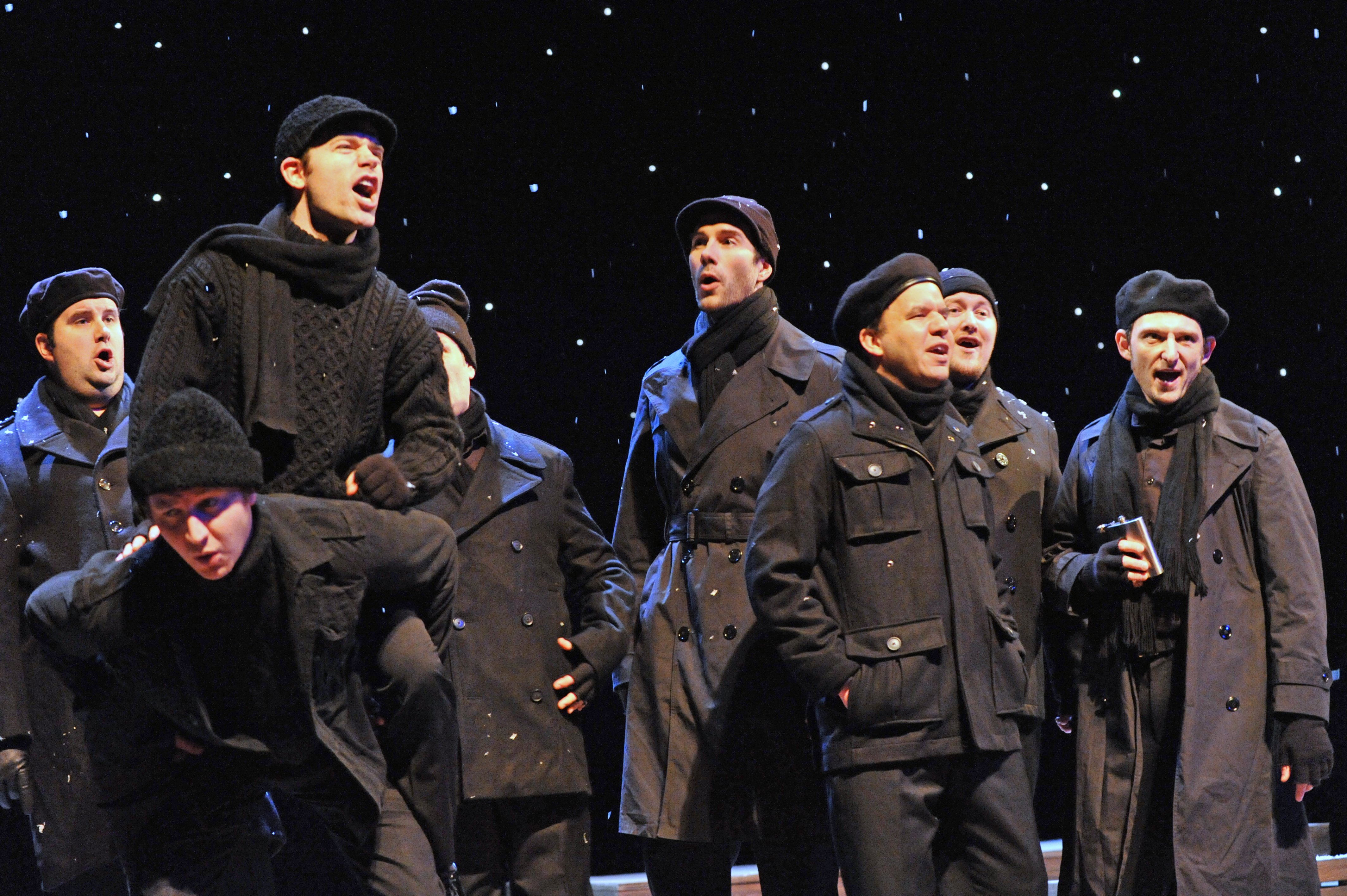 Al Is Calm: The Christmas Truce of 1914 is enjoying its sixth anniversary (and six performances only) from December 19-22, 2013 at the Pantages Theatre. Featuring Cantus, an accomplished vocal ensemble along with three actors, Theater Latte Da’s artistic director Peter Rothstein artfully recalls the historic foot soldier-created truce between WWI’s Allied and German forces over Christmas 1914.

Although an astounding moment in history, few of us were schooled in details about the truce. Rothstein’s inspired development of this production took five years, visits to the Western Front, and extensive research in Brussels, Ieper, Paris and London. This approx. 90-minute, no-intermission production tells the story of how active-duty soldiers working, literally sometimes just feet from each other, decide to lay down arms for at least one night (and in some locations, a few nights).

Artfully presented, the production begins with a Christmas carol prelude by Cantus. English composer Ralph Vaughan Williams created this particular arrangement for his own battalion. Throughout the performance, Cantus members hauntingly, heartily and authentically sing in the various languages of the troops or accents of the soldiers. The remarkable vocals gave me equal amounts of goose bumps and tears throughout the performance (a nod to musical arrangements by Erick Lichte and Timothy C. Takach).

The staging is simple: a riser created with logs, crates for sitting, a pin light curtain, a full moon and graceful moments of falling snow or eerie fog. Perhaps it’s this minimalism and the black and grey costuming that unites the actors with the chorus members seamlessly. It also creates the illusion audience that we are indeed in the trenches.

The actors, Matt Rein, David Roberts and Alan Sorenson, narrate the performance with excerpts of actual letters from the soldiers. Their accents seem authentic, the projection is perfect and a true sense of camaraderie is extended out to the audience with very little theatrics. The letters provide vivid details, some humorous, all heartfelt about how stunned the soldiers were that a truce, albeit short, happened at all. An allied soldier expresses to his family his disappointment with the fact that “we” made the first kill when the truce was over, not the Germans. The authors’ names, rank, and battalion are cited at the end of each delivery. This adds a personal element that makes hearing the words even more profound. A favorite line was towards the end when one letter notes that soldiers were able to create something even the Pope could not: a peaceful Christmas day. (We’re told at the beginning that Allied leaders refused the Pope’s idea for a battle ground truce that year, although the Germans had agreed to it.)

The production and theater provides the audience with a helpful, detailed program that shares pictures, short bios, and other relevant information about the truce itself. Of particular interest are the four soldier poets of World War I that are introduced. It allows the audience to bring the story back home and extend the experience of learning about a poignant part of world history.

As a singular performance, this was moving and heartfelt. As a Christmas tradition, it provides opportunity for intergenerational conversation. My guest this evening was a woman whose grandfather served in World War I. She was struck by the beautiful sound of Cantus, but also remarked about the dignity this production offered the individual soldiers. All too often, it seems, that we the public are presented with vague information about fallen, or even active duty soldiers. A particular pet peave of mine is when an individual soldier is referred to as a “troop.” It is sons and daughters, fathers and mothers who are killed in war, not a troop. It is my opinion that individual stories deserve recognition just as they are presented in this production. Well done, Mr. Rothstein!

Read Madeline Salmon’s review of All Is Calm (December 2011)