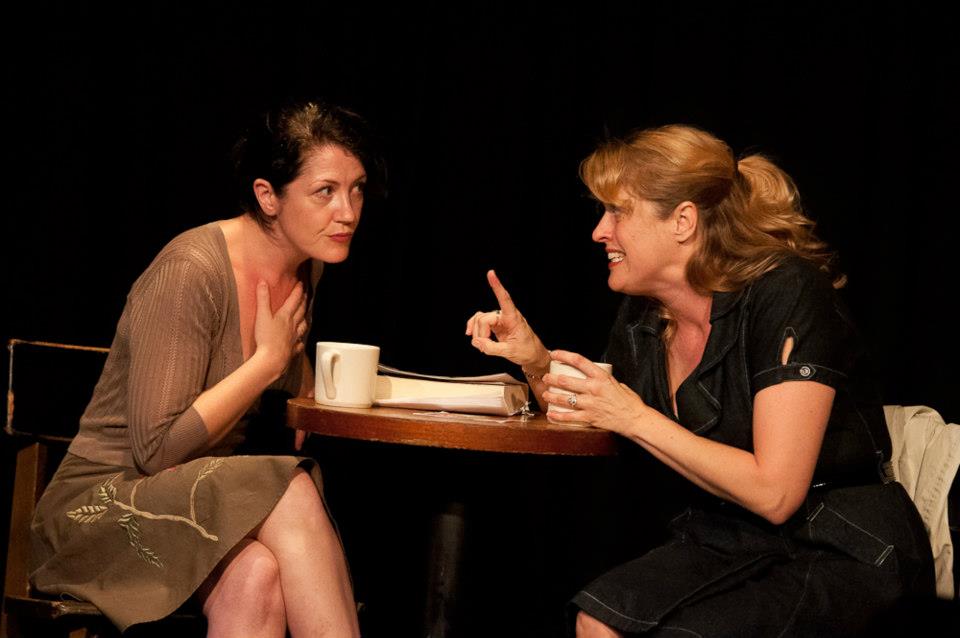 Now I know what all the fuss is about. It seems I have missed this show not once, not twice, but three times. 2 Sugars, Room For Cream started out as a hit show in the Minnesota Fringe Festival in 2009, where it ended up one of the top ten selling shows that year, and landed the encore slot for its venue. Then it was revived as part of Illusion Theater’s Fresh Ink series in 2010. Then it got remounted through the Hennepin Theatre Trust in 2012, and got an Ivey Award for Ensemble Acting. Now it’s back again, this time at the Jerome Hiil Theater in downtown St. Paul, where I finally caught up with it. And now I understand why 2 Sugars, Room For Cream keeps resurfacing. It’s delightful. Not just delightful—it’s funny, it’s smart, it’s moving, it’s just a heck of a lot of fun.

“I was never that young. My mother would have disowned me.”

Shanan Custer and Carolyn Pool have created something really remarkable here. It’s a two-person show that isn’t constrained by the fact that it’s a two-person show. It’s a collection of short scenes that isn’t limited by the fact that we don’t spend a lot of time in any one situation with any one set of characters. It’s a comedy that’s more than a bunch of lame punchlines. The comedy comes from the humanity of the characters and the fact that we recognize ourselves, or people we know, in all of them. It’s the kind of script I hope Custer and Pool are having published because they could do a lot of actresses a favor by offering up all this smart, witty, meaty material for auditions, classes and performance. (Of course, I’d understand if they wanted to keep this material just for themselves. They created it and no doubt do it best. But this is the kind of good theater that should get spread around.)

“Decaf is pretty much the same as regular coffee, said no one ever.”

There are some characters we meet only once, and several sets that we return to and follow their story further. All of these women somehow revolve around coffee as their beverage of choice. A few throw a little wine into the mix along the way. There’s an ongoing debate about whether they’re getting too much or not enough to drink. The evening opens and closes with two sisters in the aftermath of an uncle’s funeral. At first they’re hiding out in the church basement from the family politics playing out in the church above them. Later they’re dancing drunkenly as they continue to meditate on life and death. The next morning finds them hungover in a desperate search for a coffee fix, made just a little more desperate by their recent brush with mortality.

“I don’t care if you’re in a band, you’re still my coffee monkey!”

Another clever pairing that keeps resurfacing finds two women awkwardly fumbling their way through a conversation at a high school class reunion. Their strange reluctant bonding ritual continues into the wee hours of the morning and several unexpected locations as we revisit them.

“I have a lactation specialist. She’s a Nazi.”

The most insightful bit of two-part comedy comes in an office setting. First we meet two young office drones who spend their coffee break bemoaning their lack of sleep because they were out so late the night before, as well as the travesty of being cut off from Facebook on the company computers. They speak in a language of hashtags that sounds like English but doesn’t seem to be about much of anything. They, however, consider it all very meaningful. Even though the writer/performers are clearly poking some fun at these characters, they still nail how someone like this manages to get through their days and make a living. Unseen, some supervisors pass through and make a request for a certain file to be copied.

“I don’t have children. I have two nieces and a cat that hates me.”

In the second half of the show, we find ourselves with two female executives on a coffee break, tired because they were up dealing with children, family and home issues the night before. Their talk is all about balancing a life outside work with the demands of a career. They seem to be doing it well, even if they are a little exhausted in the process. They’re not letting office politics consume their entire lives because they realize there are other things that make up a full life. Then they pass by some unseen coworkers, making a request in passing that a certain file be copied—and you realize this is the flip side of the coffee break we saw earlier. It’s not just a reflection of different periods in people’s employment lives, it’s an exploration of how everyone’s story overlaps with someone they don’t understand. Except everyone has a story, and now we in the audience have seen them both. Like all the best material in an evening packed with good material, it gives you a lot of laughs, and something to chew on when you think back to it later.

There are also some great solo moments. Carolyn Pool introduces us to a mother-to-be making video messages for her baby as a ritual during her pregnancy. We only see one recording session, but it is clear this is one of a series. This mother is most concerned with trying to set a good example for a tiny human she hasn’t even met yet. She feels the responsibility of this, and fears she won’t be someone her baby can look up to. In sharing all those fears, of course, she proves herself to be exactly the kind of mother she hopes to be. Shanan Custer gives a college professor’s opening speech to her class, and the assault on her system of switching to decaf coffee makes her a little more brutally (and hilariously) honest about the college system that she was probably originally planning to be.

There are also some great encounters between strangers who find unlikely common ground. Two women board a commuter train at different times but are listening to the same song on their iPods (Kelly Clarkson’s “My Life Would Suck Without You”) perfectly synched. All of which leads to a glorious little mini-dance party. Two women share the same table in an overcrowded coffeeshop and end up deconstructing the things that pass for entertainment, and that pass for dating options, for their generation and the one coming behind them. An overstressed new mother sits down on a park bench for a good cry next to a woman who has no children, but does have some amusing insights on what all the experts can do with their professional child-rearing advice.

“A platitude is an animal.”

2 Sugars, Room for Cream is really the best kind of comedy. The laughs are based in character, and the characters are all quickly and deftly sketched in by the writing and performances of Custer and Pool. They work off each other seamlessly, even though they have very different acting styles. Even though the evening is carefully structured and scripted, the rapport between the two performers makes the whole thing feel unstaged and natural, even improvisational. Half the fun is you have no idea what they’re going to do next—whether it will be a completely new set of characters, or the return of ones we had fun with earlier in the evening. Either way it goes, you end up happy. There are even some songs and a trip back in time but really you should just go see the thing for yourself. It’s comedy with something to say, but it doesn’t beat you over the head with any of its messages. In fact, most of it is like time-released medicine entering your system. You get all the laughs up front, and then later you realize, “Hey, you know, they had a point there, didn’t they?” It’s comedy that doesn’t leave your head the minute you leave the theater.

“We like it when people write down the things we say.”

I went in wondering “Is this just going to be random sketch comedy?” and, I’m kind of ashamed to admit, “Is this just going to be a ‘woman’s show’ and I’m not going to be in on the joke?” What a ridiculous notion: woman’s show. Where was I taught this? 2 Sugars, Room For Cream is smart entertainment for everyone. It’s wonderfully funny with performances that run very deep and real. These characters aren’t clowns or cartoons. They show us how strange and silly we all are. And that’s a good thing.