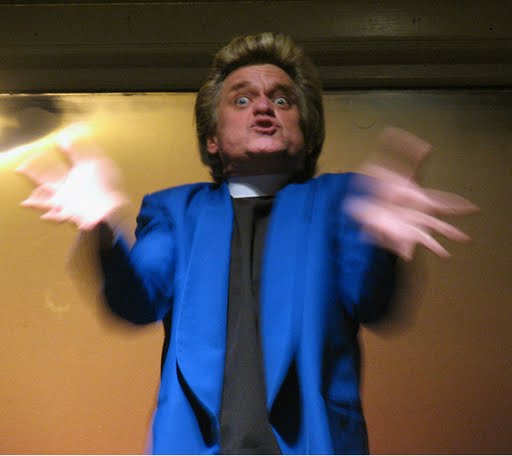 Reverend Billy of the “Church of Life After Shopping” rallied supporters to stop shopping with two movie screenings of “What Would Jesus Buy?” and two rallies on Black Friday and through out the weekend of November 28-29. Rev. Billy performed with a revival preaching evangelic delivery. Audiences responded by laughing, clapping, chanting, singing, handholding and listening intently. (Video below)

In 2006, Bill Talen, a.k.a. Rev. Billy, starred in the docu-comedy feature film, “What Would Jesus Buy?” which pokes and prods at mega shopping centers and retails outlets such as Wal-Mart, Target, Starbucks, Mall of America and other businesses that have threatened and brought small businesses to their knees.

His Twin Cities rallies were held in two small venues; at the House of Balls, an art studio in Minneapolis, and John Davis Auditorium at Macalester College in St. Paul.  At the House of Balls, it was a party atmosphere with food and drinks for the 60 people attending, who ranged from families with young children to those in their 70s.  Macalester ‘s Davis Auditorium filled to 90 percent of capacity. Attendees seemed a little more reserved, with a few college students and an older 50s, 60s crowd.

The approachable Rev. Billy is funny, offbeat and impassioned. He wore a starched polyester white sport coat and pants and a pompadour hairstyle.  Steve Blake accompanied him at the keyboard with gospel blues.  This is Rev. Billy’s “performance” not his sermon.

His message is exuberant but not entirely clear, ranging from admonitions on not buying and ridding yourself of credit card debt to buying local and being aware of sweatshops.

Reverend Billy has delivered his message since the mid-1990s by preaching in the streets,  touring with a choir of 38 members and an eight piece band, doing three movies, writing two books and now running as a Green Party candidate for the mayor of New York City.