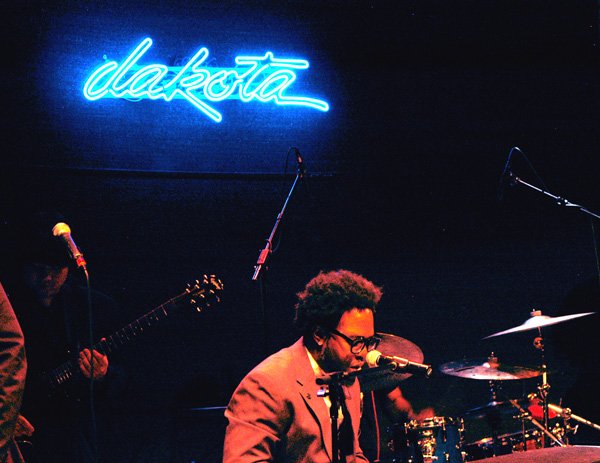 His music is for lovers. The “broken-hearted” lovers. The “brand-new-love” lovers. The “only for one night” lovers. The “for a lifetime” lovers. In a packed house on November 11th Monday night at the Dakota Jazz club, the second of two sets, each type of lover was in the crowd and swaying to the Detroit-born crooner. Dwele showed that the night was for his fans and emanated a warmth from the stage that gave an atmosphere of good times with old friends.

Dwele became best known for offering the silky hook to the Slum Village instant classic “Tainted,” offering a tender refrain to the hypnotic and jazzy track about urban adventures in love and life. Soul and R&B audiences were instantly hooked by the artist’s Detroit infused re-imagining of the neo-soul genre. His style represented him musically being shaped by a rearing on hip-hop, a sophisticated exposure to jazz, and a knack for preserving the legacy of soul “baby-making” music. He was among a sect of soul musicians that brought a twist to the music, when the genre as a whole was becoming more and more hyper-produced and less situated in raw artistry.

As a performer Dwele brings a sincere love for real music and the fans that enjoy it. Not timid when it comes to interacting with the audience, Dwele brought a couple who was sitting in the first row on to the stage to slow dance while he played them one of his more steamy tunes. The couple was at first hesitant and shy around the request to share the stage, but eventually eased into the moment of having the soul man sing for them like they were the only ones in the room. Dwele then jokingly patted himself on the back for guaranteeing them a night of passion after their magical and unforgettable moment at his show.

Another memorable moment came when he left the stage and entered the audience. A fan, when given the chance at Dwele’s microphone took the opportunity to serenade him impeccably with the singer’s own lyrics, undoubtedly memorized by countless spins of his albums. Dwele clearly enjoying every moment of it, celebrated her as though he was a fan at her show. He then walked through the entire first floor to the balcony level to move through the audience singing and posing for pictures with fans, the crowd coming together under his groove.

Dwele invited a couple onstage during his performance.