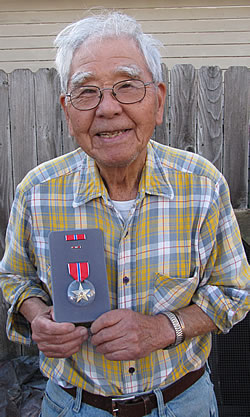 At age 91, retired Sheet Metal Workers Local 34 member Butch Kumagai qualifies as a member of the “the Greatest Generation” – the name journalist Tom Brokaw gave to the generation which grew up during the Great Depression, fought in World War II, and then built post-war America. Kumagai’s story is that of a man who was in turn farmer, soldier, and a union sheet metal worker. But his story is also a chronicle of overcoming discrimination in the country he risked his life to defend.

Hisashi Kumagai was born Oct. 21, 1918, in Riverside, California, just outside Sacramento. He acquired the nickname “Butch” as a young boy, he related, from the workers making deliveries to his parents’ farm.

“Before the war. We were farming in California,” growing tomatoes on 70 acres of rented land in West Sacramento for a cannery, he said.

Then came Japan’s attack on Pearl Harbor Dec. 7, 1941, and the onset of war. Americans of Japanese ancestry, who had already lived with discrimination, now faced even greater hostility.

“We couldn’t sell product. Nobody would buy anything,” Kumagai recalled.

Dark days
His father, who had lived in the United States since 1900, was sent to North Dakota as a prisoner of war and tried in court, but couldn’t be found guilty of any crimes and was released.

In the meantime, President Franklin D. Roosevelt signed Executive Order 9006, on February 19, 1942, authorizing the detention of more than 110,000 Japanese Americans in internment camps.

“Japanese Americans were all put in internment camps,” said Kumagai, who was 23 years old at the time. “There was nothing we could do.” Kumagai, his mother and five siblings were forced to leave their home. Each member of the family was allowed to take only one suitcase. “We had to give up our farm, all the equipment we had. They gave us nothing for it.”

Kumagai’s father was able to rejoin his family, who had been sent to Tule Lake internment camp in northern California. Tule Lake was the largest of 10 camps administered by the War Relocation Authority. The camp housed a peak population of 18,700 adults and children. At Tule Lake, the residents’ protests about poor living and working conditions led the U.S. Army to intervene and rule the camp under martial law until 1944.

Butch Kumagai lived in Tule Lake for about one year and then took advantage of an opportunity to leave by volunteering for a defense training school in Shakopee, Minnesota. He arrived in Minnesota in June 1943. Once he arrived, however, he was told the school was short of funds and he spent only three days there. He was soon working in a laundry during the day and taking welding classes at Dunwoody at night.

In the Army
A year later, Kumagai was drafted into the U.S. Army and was assigned to the 442nd Regimental Combat Team – a unit composed almost entirely of Japanese Americans.

After training at Ft. Snelling in Minnesota and Camp Shelby in Mississippi, Kumagai shipped overseas in January 1945, one of the last replacements to join the 442nd Regimental Combat Team, he said.

The 442nd had been fighting in some of the toughest battles of the war and would win distinction as “the most decorated unit in U.S. military history.”

Kumagai saw combat for four months, fighting in three campaigns against German forces, including the Po Valley campaign. He served as an ammo bearer, carrying six mortar shells. He rose to the rank of sergeant. And he was awarded a Bronze Star.

During the Po Valley campaign in Italy, the 442nd was part of one of the most famous feats of the war – a surprise attack at the top of a 3,000-foot ridge between Mount Cerreta and Mount Folgorita.

“We had to climb a steep mountain all night long to get to the top,” Kumagai related. On April 5, 1945, “as soon as day broke, we attacked.” In 32 minutes, a heavily-fortified German position that had repelled Allied assaults for five months was overtaken.

The 442nd was famous not only for its heroics, but also for the casualties suffered. Kumagai, however, was lucky. “I was very fortunate. I never got a scratch. Praise the Lord for that.”

Victory came in Europe in May 1945, but Kumagai remained stationed in Italy processing German prisoners and wasn’t discharged until August 1946.

Return to Minnesota
He returned to Minnesota – for a special reason. Before leaving the state, Kumagai had gone to a USO dance and met Terry, a young Japanese American woman originally from Seattle. “She wanted to get married before I went overseas,” Kumagai said. “But I figured I would never come back. I said, wait, if I come back, we’ll get married.”

The couple married on Labor Day weekend, 1946: one week after Kumagai returned to the United States. They later established a home in the Seward Neighborhood in south Minneapolis, where they have lived for 50 years.

Kumagai was hired back as welder at a furnace company where he worked before he was drafted. He worked most of his career for non-union companies, he noted. “I didn’t know how to get in the union,” he said. And, he explained, it was “very hard” in the post-war period for someone of Japanese ancestry to join the union.

“I was only in the union two or three years, then I retired,” Kumagai said. But he added, “while I was in the union, the best job I ever had was working for a company that had a contract working on the Monticello nuclear power plant.” He worked there to make the plant’s ventilation system earthquake-proof, he related.

“They sent me there for a year. That was the best job I ever had. All the Sheet Metal Workers who worked there made good money.”

The Monticello plant was 50 miles from home, Kumagai recalled, but mileage was paid and the work paid double for overtime.

Kumagai retired at age 67 in 1985. In retirement, he’s been an active member of the Sheet Metal Workers’ “Rusty Tinners” retirees club. “I help out a lot,” he said. He likes “to meet all the friends who are retirees.”

Fewer who remember
Kumagai has traveled to reunions of the 442nd regiment, but now, he notes, fewer and fewer veterans remain alive or able to travel. “I don’t know if they’ll have any more,” he said.

Kumagai just marked his 91st birthday and he tries to keep fit and active. “I love to bicycle,” he said. “You’ve got to be active. Anytime I don’t do walking or biking in a week, you feel lousy.” He bikes several miles a day, running errands by bike to the bank and the grocery store.

The walls of Butch and Terry Kumagai’s home in Seward are adorned with Japanese art, a painting of Jesus on the cross, and family photos. Their daughter, Gloria Savitt, earned her doctorate degree and works for the University of Minnesota. Their son, Alexander Kumagai, works for the Minneapolis Park and Recreation Board and is a 17-year member of City Employees Local 363. Butch and Terry have three grandchildren and one great-grandchild.

In the backyard, Kumagai tends a small garden, growing tomatoes and eggplant. But he has never returned to the land his family farmed in California.

Kumagai has mixed feelings about the disruption to his family’s life in California. In 1988, Congress made an attempt at amends for the internment of Japanese Americans and the homes and businesses they lost. The Civil Liberties Act of 1988, signed by President Ronald Reagan, included a formal apology and stated that the internment resulted from “race prejudice, war hysteria, and a failure of political leadership.”

“The government gave each of us $20,000 for what happened,” Kumagai noted.

Out of the bitter experience of the internment, however, Kumagai says something positive happened. Japanese Americans, who had largely been confined to the West Coast, eventually were able to seek new opportunities throughout the United States, to rebuild their lives, and to rebuild their American dream.