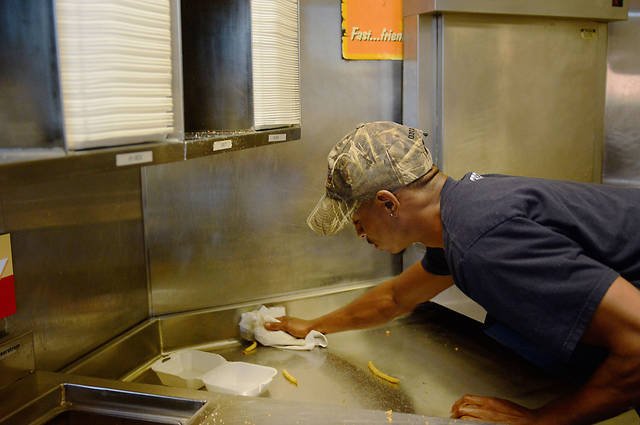 Sitting in a booth at Raising Cane’s Chicken Fingers, Kent Kramp lowered his voice when the topic of foodborne illness came up.

“It would ruin my name, as the owner, if I was getting people sick,” he said.

City inspectors don’t set out to punish restaurants. Instead, they work with owners and operators to fix the violations they find — violations that are found in nearly every Minneapolis restaurant.

On full inspections, the Minneapolis team of 16 inspectors runs through a long checklist of possible violations, keeping tabs on more than 4,300 facilities. Dan Huff, who oversees the inspections unit, said it’s rare for an inspector to find nothing’s wrong in a restaurant.

Of the 22 restaurants and bars that were closed by Minneapolis inspectors since the beginning of 2012, only one was in the University of Minnesota-Twin Cities district. On campus, the University inspects its own food facilities, and there’s no record of a health code-related closure.

Violations run the gamut from obvious to obscure. For example, several Dinkytown restaurants were cited for failing to make visible to employees “an approved chart illustrating an approved emergency first aid procedure for choking.”

Inspectors code violations as critical or non-critical, depending on whether they pose an immediate risk to the public.

Leaving cooked food out for too long, for example, allows bacteria to breed. Some owners call the practice “time-temperature abuse,” and if an inspector sees it, the inspector will make a restaurant throw the food out. Time-temperature related offenses are some of the most common critical violations, along with a lack of readily available cleaning supplies.

Huff conceded the violation system isn’t perfect. It provides no context, he said, because inspection records only note whether a restaurant made a mistake, not the severity of it.

But many restaurant owners said they don’t have a problem with the food code’s requirements.

Huynh said the city’s routine inspections, which are usually annual and always unannounced, are a good way to get a random sample of a restaurant’s food.

But not all kitchens are maintained equally. In several Minneapolis incidents, inspectors temporarily closed restaurants after finding cockroaches in the food prep area.

A number of restaurants that closed declined to comment for this story or could not be reached.

All but one of the restaurants that closed since the beginning of 2012 reopened after passing new inspections. The most recent one, which closed last week, is still in talks with the city.

In Kansas City, Mo., which has a population similar in size to Minneapolis, inspectors have suspended 86 licenses so far this year, said Jeff Hershberger, public information officer for the city’s health department. Most of the suspensions were for food carts, not full restaurants, he said.

The city did close a restaurant with a backed-up sink. The staff was able to get a plumber to fix the problem so quickly, the restaurant reopened later that afternoon, Hershberger said.

In Minneapolis, it takes a serious violation like a pest outbreak to justify closing an establishment on the spot, and it’s ultimately the inspector’s call.

“We don’t shut them down for not hanging up their mop,” Huff said.

‘We try not to be food cops’

Shutting down a restaurant over sanitation concerns is a last resort reserved for when fines, citations and one-on-one meetings with city staff can’t fix the problem.

After a restaurant corrects major issues, the city often allows it to reopen under certain conditions, like more frequent inspections.

But very few issues ever get to that point, said Minneapolis inspector Mohamed Yusuf. For most bars and restaurants, he said, noting a violation once is all it takes to get it corrected.

Yusuf said inspectors try to work with business owners rather than against them, giving them a chance to correct mistakes and learn from inspections.

“We try to be consultants, educators and regulators all in one visit,” he said. “We try not to be food cops.”

Fellow inspector Kathy Louden said she tells owners and managers she inspects not to worry about being tagged for a violation as long as they correct the problem.

Louden said it’s difficult to tell someone she might have to shut them down, but that’s sometimes the incentive they need to get back into compliance.

At the University’s Twin Cities campus, inspector Mark Rossi has never had to close a campus food facility.

A former public housing inspector, Rossi now oversees the University’s internal inspection system. Because the University is older than the state government, it has the power to inspect its own dining halls and campus restaurants.

University code and inspection procedures are similar to Minneapolis policy, albeit on a smaller scale. Rossi sweeps most of the 83 food facilities — restaurants, dining halls and the like — at the beginning of each semester. He also inspects seasonal vendors, like food trucks, as soon as they open.

Jill Irvin, director of university dining at the University of Iowa, said she’s never seen a restaurant shut down over food safety concerns at any of the schools she’s worked at, which include Ohio State University and Purdue University. Universities typically have the resources to train their employees effectively, she said.

“The people that you hear about that are being shut down, or have multiple violations, tend to be small restaurants that maybe just don’t have the manpower to be on top of the game all the time,” Irvin said.

At the University of Iowa, county inspectors oversee food code compliance, but Irvin has also been at schools that handle inspections internally.

This self-monitoring doesn’t hinder the process, she said. Inspectors are usually in a department separate from food service.

“I suppose there is the opportunity for some more favorable reviews,” Irvin said. “But my experience is that doesn’t happen.”

Some students said they avoid restaurants that seem unclean or come with poor recommendations from friends.

“If I know that it’s dirty, I’m not going to put that in my body,” physiology sophomore Paige Haney said.

Others said bad experiences drove them away from restaurants they used to frequent.

Craig Jackson, a University lab attendant, said he and his coworkers often used to order delivery from a local Chinese restaurant. But after a routine order Jackson said he believes made him sick, the lab employees took their business elsewhere.

Jackson said it never occurred to him to report the incident to the restaurant or the city.

One call from someone like Jackson may not trigger a full inspection, but city officials follow up on every complaint, said Minneapolis inspection manager Huff.

“Maybe we call the manager, maybe we go by,” he said.

In fact, inspectors Louden and Yusuf said they often deviate from their list of planned inspections in order to check out new complaints. Typically, they try to look into complaints within two days of receiving them.

Yusuf said restaurant owners might not immediately trust inspectors. But after a few visits, he said, most owners know to treat them as partners, not enemies.

Burrito Loco Bar and Grill owner Greg Pillsbury, who has operated restaurants in Dinkytown for a decade, said he’s never felt like an inspector was out to get him.

“The old stereotype of inspectors coming down on people … I’ve never seen it,” he said.

Inspectors said collaboration between both sides is key.

“We all have the same goal here,” Louden said. “We’re all looking for food safety.”

This is a map of area restaurants. Click each point to see violations recorded on routine inspections around the University of Minnesota between Jan. 1, 2011 and Aug. 21, 2013. Because the data frequently referenced Minnesota statutes, violation text was simplified for readability. Source: City of Minneapolis