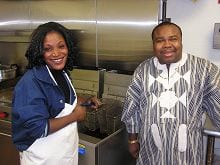 After one small store of 500 square feet, Edoh Akakpo has quickly become a major player in the African grocery store business in the Twin Cities. The jovial Mr. Akakpo, the owner of the African Market on Nicollet Mall, five blocks from the southern tip of downtown Minneapolis, recently opened a second store in Brooklyn Park, the northwest suburb with a large concentration of the African immigrant middle class.

He has prospered since opening his Nicollet Avenue store but, despite the second store’s opening, his real passion has been in running his own restaurant. Hence the opening of the new Akwaaba restaurant adjacent to his Nicollet Avenue store. He had a soft opening in March and is planning a grand opening on June 1 to coincide with the soccer World Cup. Akwaaba means welcome in the Twi language of Ghana.

With four years running a retail store, Mr. Akakpo felt the time was right to realize his dream. He called Mshale a day after his unannounced soft opening wondering why we had not stopped in to see his new restaurant “given that you are just two blocks from me,” he asked.

His Nicollet Avenue store is a popular destination for the African professional class that works downtown. He has been able to win their loyalty by maintaining a clean environment. One is unlikely to find food that has that suspicious look of being past the sell-by date or store fish sitting in the open. “I run a professional operation here, man,” he proudly states.

He does not believe in being penny wise and pound foolish. When he recently opened the Brooklyn Park store, he did not hesitate to spend the money to put up a modern and expensive-looking neon sign for the store. He would not reveal how much he spent on it but a quick check with area sign companies provides a range of $5,000 to $7,000 for a similar-sized sign. He put up the sign a few weeks after opening the store and traffic quadrupled immediately after the sign went up. “People know when you are serious, and they will reward you with their patronage,” he says.

He says it has taken him a while to get into the restaurant business because of the capital outlay that is required. Banks are hesitant to give restaurant loans because of the high failure rate. Besides, he says, he has been reluctant to get tied up in business loans anymore. When he opened his first store, he received a Minneapolis city loan around the time the city was encouraging new businesses to locate on what is now called “Eat Street”. The area had decayed over a number of years and new immigrants have helped revitalize it. Although he has since repaid that loan, he is not looking forward to any new loans. The new restaurant has been financed by earnings from his first store. The restaurant has the look of a work in progress. He is furnishing the store as the earnings come in from both the store and the restaurant.

He hopes to replicate the success he has experienced with the store into his new venture. “I am not afraid to do whatever it takes, to make it work,” he says.

His success is rare in the African grocery business community. He moved from 500 square feet at his first store to a fivefold expansion of 2,500 square feet in two years. Many store owners struggle for three to five years before they can afford to expand their space. He does benefit from the foot traffic given his prime location near downtown. At any given time, those coming through his store are there for convenience store items.

Mr. Akakpo, an alumnus of Augsburg College in Minneapolis, is one businessperson who is not afraid of the big boys. He will gladly price match an item for you if you find it lower elsewhere. He says many customers are surprised with this approach, given that it is not common with other African stores. “Some will take advantage of it, but in the end they respect us, I will even match Wal-Mart”, he states. On this particular day, a customer was in to buy an African DVD movie and was a bit taken aback that Mr. Akakpo’s store was $3 cheaper. The customer quickly bought two copies after verifying it was indeed the same product and was not a bootleg.

In his new restaurant, he hopes to capitalize on the foot traffic and his own customer base. He has slowly built a clientele of African Americans who come to the soul food restaurant next door. They come in to buy some of the food and spices and also to get a “connection to the homeland.” He says now they can also try the cooked food.

Akwaaba restaurant serves among other things on the menu, Fufu with goat meat stew, Fried plantain (aloko) with fried fish, Attieke (grated cassava) with fried fish, Rice mixed with beans (Watche), Kenkey with pepper soup and the ever popular jollof rice with beef.

Those who have stopped in since the restaurant opened “like the food and atmosphere, especially the decorations,” he states. Each wall is decorated with African masks and clothing. There is a space created where the big-screen LCD TV will go, he says “in time for the World Cup.”