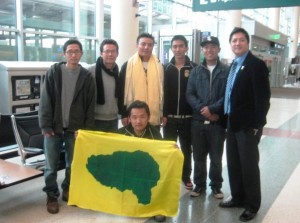 RTYC Minnesota member Tashi Khongtsotsang (scarves) with the Presidet Jigme Ugen (extreme right) and other members at the Humphery Airport in Minneapolis.

Tashi Khongtsotsang of Minnesota, flew to Florida to join the group.

Norbula said his “goal was to get in touch with our roots, our younger generation and our communities to let them know to keep the movement alive and to spread the word to Free Tibet.”

Norbula, the 45-year-old nephew of His Holiness the Dalai Lama and son of  Late Taktser Rinpoche, was struck and killed by a car Monday evening shortly after starting out from St. Augustine, Florida, on a 300-mile walk for Tibetan independence. Tibetans all over the world have been gathering in their areas to pray and honor his dedication, commitment and ultimately his sacrifice for Tibet’s independence. There are also tribute walks being planned in many countries.

The Regional Tibetan Youth Congress of Minnesota had made a pledge and committed to help co-ordinate and complete Jigme Norbula’s “Walk for Tibet: Florida 2011″. RTYC Minnesota’s President, Jigme Ugen said that it was extremely important to help realize what Norbula had planned.

In May 2010 Norbula had walked from Indianapolis to Minneapolis.  When he completed the 600 mile walk at the Minnesota State Capitol on May 31, 2010, local Tibetans and members of RTYC Minnesota had continued the last six miles with him to the Tibetan American Foundation of Minnesota. Addressing the crowd there, Norbula had said, “stand up and express it by walking or some other way to let people know that people in Tibet cannot do this for themselves.”

Tashi Khongtsotsang, a 36 year old Tibetan man from Minnesota immediately took off work and decided to fly down to Jacksonville airport in Florida and join Wangchuk Dorjeela, who was Norbula’s walking partner. The 76 years old Dorjeela, from Colorado, who had previously walked three times with Norbula, had decided to lead and complete the walk himself. Dorjeela said that he was very pleased and relieved that Tashi had committed to completing the walk with him. He became emotional when he heard that there were many other Tibetan youths joining him on the walk.

Tashi believed that this was the least he could do, “Jigme Norbula is my hero”, he said. “He has walked thousands of miles for our cause; it’s now unto us to continue and keep his message alive to honor his legacy.”

Also in Florida is, Donna Brand – the main organizer of the walk. Donna while recuperating from the tragedy has been diligently and tirelessly working on putting back the routes and the logistical detail. Her two friends Brian Scrone and Jim Sheils, who had hosted Norbula in their Florida home, are now determined to participate and complete the walk.

The walk restarted with prayers at the exact location where the walk had initially started on Valentine’s Day. The walkers will then gather for prayers on Hwy A1A (N. Ocean Shore Blvd 5600 block) where Norbula was hit, a site now memorialized by locals who have placed a statue of an angel next to many potted plants and flowers.

The walkers and the organizers committed to complete the 300 miles walk to arrive at the West Palm Beach for a 1:00 p.m. ceremony at the Ann Norton Sculpture Gardens on February 26, as originally planned by Jigme Norbula.

In a Facebook tribute page called ‘Thank You Jigme Norbu la’ somebody had written: “…Your drive and dedication are an inspiration to so many as you literally followed in your Father’s footsteps”. An observation that was reiterated by RTYC Minnesota in their blog that they were overwhelmed by the support and the amount of people volunteering to help complete the walk.

“This is exactly what Jigme Norbula wanted”, said Ugen, “to bring people together to work united for a common purpose.”

Through the week, there were six more RTYC Minnesota members, and other walkers recruited by RTYC New York, ITIM Indiana and the UNFFT joining the walkers at different points. On Friday, February 18, the Tibetan community in Minnesota gathered at the Gyuto Monastery for special prayers.