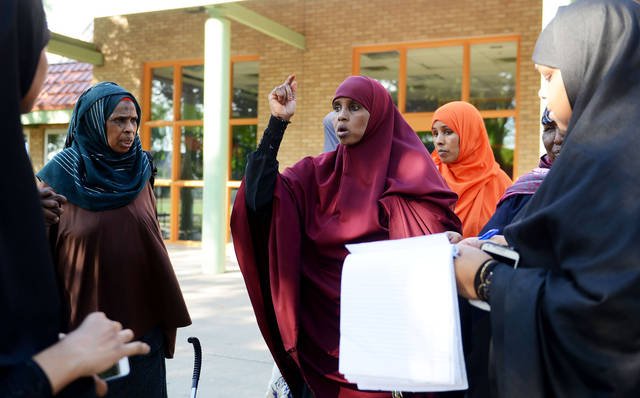 Shamso Hashi, center, explains her complaints with the living conditions at Riverside Plaza to other residents of Riverside Plaza on Saturday, Sept. 7, 2013. The Confederation of Somali Community in Minnesota will meet with residents on Friday to hear their concerns. (Photo by Chelsea Gortmaker)

After a two-year, multimillion-dollar remodeling project, Riverside Plaza residents say conditions at the apartment complex are worse than before.

Located in the Cedar-Riverside neighborhood near the University of Minnesota’s West Bank, the 11-building Riverside Plaza is the state’s largest housing development project and home to a large Somali population.

Many residents are immigrants and feel they are being taken advantage of by management, said Mohamed Jama, co-founder and general director of the Cedar Riverside Youth Council.

About a dozen Riverside Plaza residents gathered outside the Brian Coyle Community Center in Minneapolis on Saturday to discuss ongoing problems with the apartment complex’s management and security.

Attendees anticipated a larger crowd but said residents might not have come because of possible repercussions from Sherman Associates, which manages the complex.

Jama said many residents are afraid of retaliation, including being evicted.

The apartment complex gained historic status in 2011, which allowed it to receive $28.9 million in federal and state tax credits for renovation.

Remodeling work began in February 2011, and included upgrades to the buildings’ mechanical and electrical systems. A new safety center to strengthen
security was also added, according to a news release by Sherman Associates.

Fartun Roble, a Riverside Plaza resident, said she’s called the apartment’s security for help multiple times, but they didn’t do anything.

Residents also said elevators in the buildings are slow and often break down, making it difficult to get up to their high-rise apartments.

Ifrah Hurreh, who uses a walker, said she’s had to be carried down 30 flights of stairs when the elevator has broken in her building.

The Riverside Plaza Tenants’ Association met with city officials and George Sherman, the building owner and Sherman Associates founder, more than a year ago during the renovation to voice similar concerns.

Sherman said at the February 2012 meeting that his company would continue to work on solving the problems, according to a previous Minnesota Daily article.

The Confederation of Somali Community in Minnesota, a nonprofit that works to assist Somalis across the state, will meet with Riverside Plaza residents Friday to hear more of their concerns.