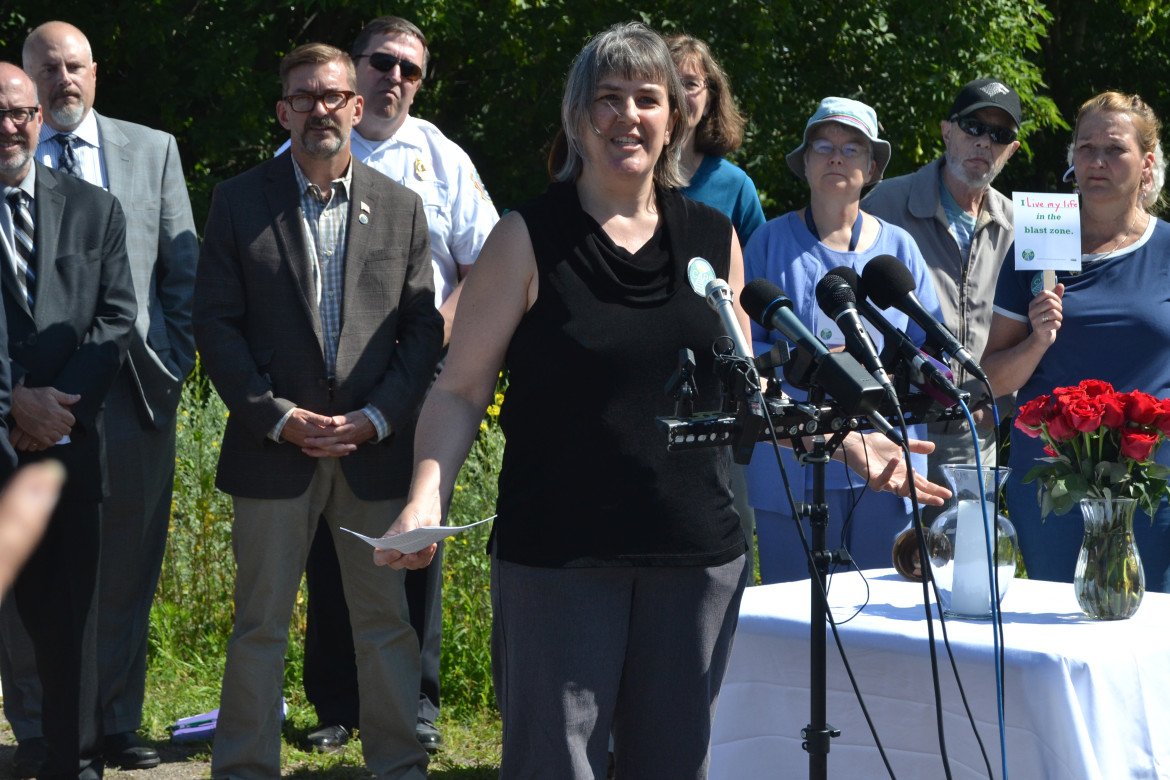 Two years ago on July 6, an oil train explosion in Lac-Mégantic, Quebec, killed 47 people, and to prevent a similar catastrophe from occurring in Minnesota, Citizens Acting for Rail Safety-Twin Cities (CARS-TC) held a press conference in St. Paul on Tuesday, July 7, to address this threat in the Twin Cities.

“There’s been some good, some bad and some ugly,” Representative Frank Hornstein said, commenting on the progress between railroads and public safety.

CARS-TC hosted the “Minnesota in the Blast Zone” press conference on July 7. The press conference glossed over the danger of railroads in the Twin Cities and gave a legislative update on rail safety and a critical evaluation on the railroad industry’s response.

Cathy Velasquez Eberhart, member of CARS-TC, resides in Como Park with her family near two railroad tracks. She explained when the railroads were first built they only carried crops and livestock. Today, those trains are carrying crude oil and hazardous chemicals, which can cause explosions like the catastrophe in Quebec in 2013 and the 12 major oil train incidents that have happened since then.

“Our homes, our schools, our senior centers, our daycares are in that blast zone. Even many of our government buildings here,” she said. “Many of [these railroads are] in a mile to half-mile radius that would be impacted by these incidents.”

Eberhart said seven-unit trains pass through the city frequently carrying oil and other hazardous substances. With hundreds of train cars passing on those railroads, she called this a “pipeline on wheels.”

Even at the press conference site, the parking lot of the Minnesota Pollution Control Agency (MPCA), was a railroad near where oil trains pass by. With the city’s population density of about a thousand people per mile, the threat of rail safety is quite severe.

“The good is we have citizen groups like ours that have sprung up in cities large and small,” Hornstein said. “This growing citizen’s movement is helping to hold railroads and public officials accountable throughout North America.”

Hornstein added how there has also been a growing response from the public sector when it comes to rail safety.

“This is just the beginning, much work needs to be done,” Hornstein said.

However, Hornstein said rail safety activists expected stronger federal rules to be in place. Along with stricter rules, Hornstein said there needs to be more transparency in the railroad industry.

In an earlier conference this past winter, local railroad companies testified they would make all documents on rail safety procedures available for the public to view.

“We need the railroads to also provide some leadership rather than taking a posture of negotiating and resistance,” Dibble said.

Even with all the criticism the railroad industry has had in recent months, Ramsey County Director of Emergency Management for Homeland Security Judson Freed made a point to thank them for their efforts.

“We’re not here at all to vilify the railroads. The fact of the matter is that they’re becoming outstanding partners of our response and recovery efforts,” Freed said.

Freed mentioned how railroads have been working on a recovery plan for if an incident  were to occur. He and other members of public safety have not seen the documents railroads agreed to make public.

At the conference, Eberhart announced CARS-TC’s launch of the community resolution on high hazard freight trains to provide a course of action that citizens, neighborhoods and state officials could perform to help address the issue.

Eberhart reasoned this issue affects those in the blast zone and also taxpayers outside of the blast zone because they would be paying for a recovery if a train catastrophe were to occur.

“While it’s politically challenging right now, at this time, it doesn’t sound unreasonable to those of us living in these areas that we ban hazardous freight trains from population centers and environmentally sensitive areas,” Eberhart said.

This conference was one of over 100 activities concerning rail safety that will take place in the week of July 6 — July 12 in the U.S. and Canada.

While state officials and the general public are waiting to see the documents the railroad industry have been working for their recovery plan, Eberhart simply thinks the trains should be rerouted to ensure the safety of citizens.

“Why are these dangerous things going through our backyard?” Eberhart asked.