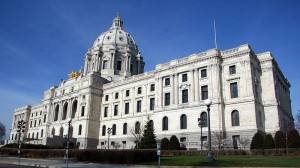 Senate Republicans introduced a constitutional amendment Wednesday that would make Minnesota the first state to require a two-thirds majority vote in the legislature to approve federal laws affecting the state. “Minnesotans enjoy inherent, natural, God-given rights,” the bill states, and “Citizens of Minnesota are sovereign individuals, subject to Minnesota law and immune from any federal laws that exceed the federal government’s enumerated constitutional powers.”

The bill was introduced by state Sens. Mike Parry of Waseca, Bill Ingebrigtsen of Alexandria, and David Hann of Eden Prairie, and is a companion to a House bill introduced by Reps. Steve Drazkowski of Mazeppa, Bruce Anderson of Buffalo, and Tom Emmer of Delano last month.

Emmer has also authored a resolution that would lay claim to Minnesota’s sovereignty: “[T]he State of Minnesota hereby claims sovereignty under the Tenth Amendment to the Constitution.”

While Republicans in several states have proposed similar legislation, Minnesota’s bills would be the first to include legislative action – the two-thirds vote requirement – against the federal government.

Republicans in Minnesota’s 5th Congressional District have gone even further: they recently passed a resolution calling for Minnesota to secede from union if the federal government exceeds its authority.

Here’s the full text of the bill introduced on Wednesday:

An amendment to the Minnesota Constitution is proposed to the people. If the amendment is adopted, a section shall be added to article I, to read:

Sec. 18. Citizens of Minnesota are sovereign individuals, subject to Minnesota law and immune from any federal laws that exceed the federal government’s enumerated constitutional powers. A federal law does not apply in Minnesota unless that law is approved by a two-thirds vote of the members of each house of the legislature and is signed by the governor. Before voting to approve a federal law, each legislator must individually affirm that the legislator has read the federal law and understands it. Citizens of Minnesota enjoy inherent, natural, God-given rights as reflected in the Bill of Rights of the United States Constitution and the Minnesota Constitution. Minnesota citizens have the right to seek redress for any alleged violation of these rights committed by the state of Minnesota exclusively through a jury trial in a Minnesota court and through enactment of a change in Minnesota law.

1.19 Sec. 2. SUBMISSION TO VOTERS.
The proposed amendment must be submitted to the people at the 2010 general election. The question submitted must be: “Shall the Minnesota Constitution be amended to affirm the sovereignty of Minnesota citizens by requiring two-thirds legislative approval before a federal law becomes effective in Minnesota, and by ensuring the right of citizens to seek redress for any alleged violation of constitutional rights?