As you can see, the John Boehner-Minnesota Golfing Fundraiser in Minnesota enjoyed beautiful weather on Wednesday August 17, 2011.  So did our Come Home America group as we traveled to Wayzata, Minnesota to banner outside the event.  We had read that House Speaker John Boehner, Rep. Michele Bachmann, Rep. Erik Paulsen, Rep. John Kline and Rep. Chip Cravaack would be hosting the $10,000 a person golf tournament and dinner fundraiser at the Spring Hill Golf Club.  Shortly after we arrived, however, outside the gated (and apparently exclusive) Spring Hill club, we were met by golf course employees who told us there was no such event on their greens.  Eventually (and probably to get us away from their club), the Spring Hill Golf crew advised us that the Republican fundraiser had been relocated a couples miles away to the Wayzata Country Club.

Numerous police officials lined the driveway to the Wayzata Golf Club and directed us to a narrow strip of “free speech area” marked with orange cones on the side of the road. As soon as we put up our banners, we started to get honks of approval from passing traffic. 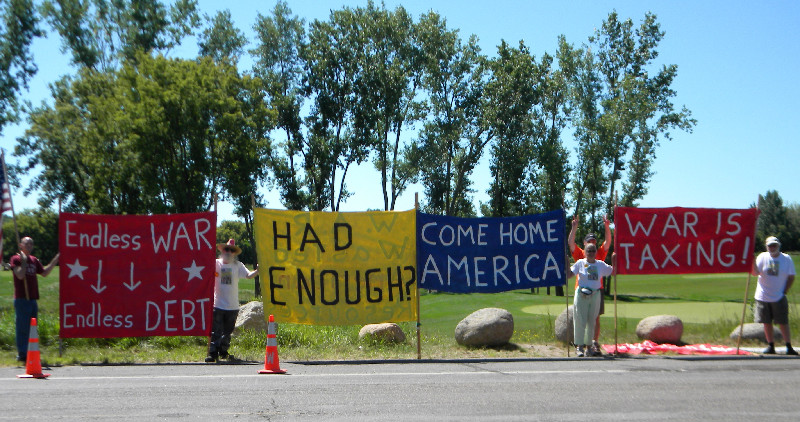 About a half hour later, a much larger group of activists was bused to the location by “Minnesotans for a Fair Economy” (identified in news reports as affiliated with “Move-On”) and the SEIU union.  These activists walked back and forth as in a picket line, carrying signs and yelling chants demanding jobs.  A plane flew overhead dragging a sky message saying, “Where’s our piece of the pie? Jobs Now!”  Puppet heads drove by in a limousine mocking the politicians believed to be golfing. We graciously moved to the side of the free speech area to give the Move-On people more room for their political theatre.

We got the chance, it turned out, to convey our points about the destructiveness of US wars as much to the “liberal protesters” as to the Republican golfers. We didn’t get much of a response, however, when we asked Move-On chanters to recall that there ARE plenty of jobs still available-although they may not be exactly what they’re looking for-with war contractors and in the U.S. military.  Nor did the organizers of the politically partisan Move-On group seem to want to pick up on our questions: “Guns or butter? War or Social Security?” or “Endless War = Endless Debt”. 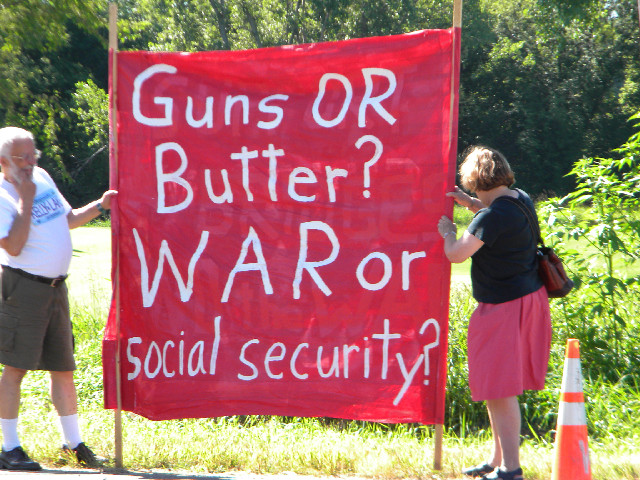 Of course the bigger question is why is it that some of the “liberal protesters” who led the charge against Bush’s wars in the 2006 and 2008 elections find it difficult to criticize Obama’s wars?  Unfortunately the Move-On group relegated itself to a script that falsely separates the many domestic economic problems of the United States from its foreign policy, its decade of costly pre-emptive wars and mounting national debt.

Although the two party kabuki theatre often ignores it, there is a growing consensus that our nation’s economic problems are linked to its costly wars. 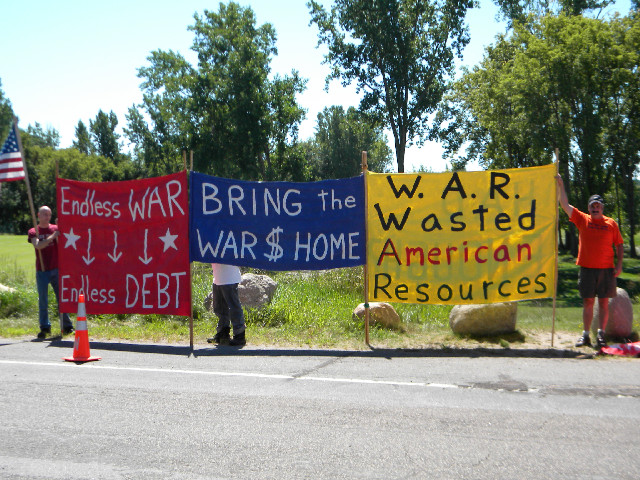