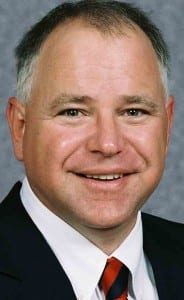 Rep. Tim Walz, the highest-ranking retired enlisted soldier ever to serve in Congress, and the representative serving southern Minnesota, emphatically supported the vote to add a repeal of Don’t Ask Don’t Tell to a defense bill on Thursday. “I’ve always thought this was a bad policy,” he told the Rochester Post Bulletin.

“The idea of a young American citizen wanting to serve and being willing to lay down their life in defense of this country and not allowing them to serve over personal and private reasons made no sense to me whatsoever,” Walz said.

He told the paper that he had witnessed a dedicated soldier dismissed for being gay while he was serving.

“My biggest concern was that the soldier knew their job, could shoot their weapon and was physically fit and mentally ready to serve. It was never an issue of whether they were at in their personal lives. That is none of my business,” he added.

Walz also took to the House floor in support of the repeal effort.

“The greatest privilege I’ve had in my life was serving this nation for almost 25 years in uniform,” he said. “I know how important it is to fill our military with qualified, professional, motivated volunteers. We are blessed in this nation, that’s exactly what we have. It’s time for us to honor their professionalism and know that they’re ready to end this discriminatory practice.”