Sonny Schneiderhan stands in her garden Tuesday in front of her Marcy Holmes neighborhood home here she has lived since 1974. Schneiderhan and other long-time residents have expressed frustration with the upkeep of surrounding rental properties. "It's a discouraging situation, if it weren't for my garden I might have already left," she said. (Photo by Blake Leigh)

Long-term residents surrounding the University of Minnesota are concerned as homes shift from being owner-occupied to rental properties.

Housing experts have identified a dramatic increase in the conversion of owner-occupied single family homes to rental properties in the city of Minneapolis since 2001, according to a city report.

Residents of the neighborhoods surrounding the University worry that the shift away from home ownership has attracted poor landlords with no personal interest in the neighborhood, among other problems.

“They don’t feel that they’re part of the community. They don’t have any investment in maintaining these properties,” said Ardes Johnson, a Marcy-Holmes resident of 11 years and a co-chair of the Marcy Holmes Neighborhood Association Safety and Livability Committee.

Johnson and other residents say the decline of owner-occupied homes has caused many homes to fall into disrepair.

“Owners take pride in their places, and when you lose that investment and interest in a neighborhood, the properties aren’t kept up,” said Sonny Schneiderhan, a Marcy-Holmes home owner.

Schneiderhan, who has lived in Marcy-Holmes since 1974, has seen the neighborhood shift from a community of families to a transient population of student renters.

“When I bought my house in ’74 almost every house on this street was owner-occupied. Now it’s almost all rentals,” she said.

Southeast Como had the third highest decline in owner-occupied houses from 1995 to 2012, according to the report. Marcy-Holmes had the 10th biggest decline. 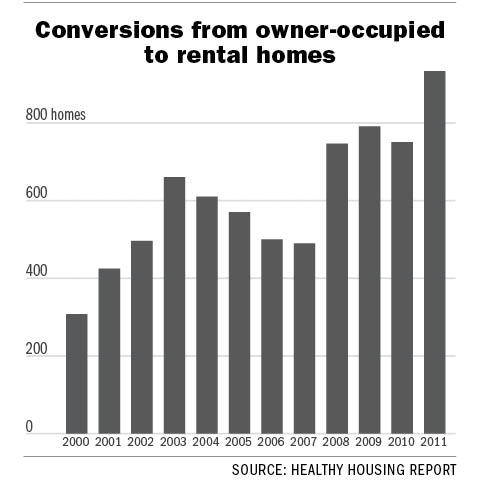 Schneiderhan said she has watched her block become a “slum.”

“It used to be a nice-looking neighborhood. Now there are screens and windows falling off of houses, beer bottles on all of the lawns,” Schneiderhan said. “In general, there’s no upkeep.”

Craig Janssen, the owner of Elmwood Properties, refuted the claim that the neighborhoods are filled with careless landlords.

“There’s always a few that tend to create an impression for all. There are a few landlords who are not very responsible,” Janssen said.

While a majority of converted homes in the neighborhoods around the University are rented by students, long-term residents don’t blame students for the problems stemming from these conversions.

“The problem is not with students, it’s with the landlords that don’t take care of their properties,” said Prospect Park resident Dick Poppele.

“Somehow it’s being characterized that the neighborhoods don’t want to have students, and that’s not true,” Poppele said. “We don’t like the conditions that students are being forced to live under.”

After witnessing the poor upkeep of single-family homes that have been converted to rentals, residents have expressed concern for the students living in these properties.

“Students have to live somewhere, and it makes sense for them to live near the University,” said Ihor Yermolenko, a resident who grew up in the Como neighborhood.

“They don’t care about their properties,” he said. “They’re just out here to make a dollar.”

But Janssen said landlords aren’t the ones to blame.

“The problem is failure of the inspections department,” he said. “It’s not about landlords taking advantage of people; it’s about failure of the city and the neighborhoods. The city is ineffective at managing bad landlords.”

Residents have also noticed that the presence of so many renters in their community has fostered a sense of entitlement among students.

“The attitude from students and even police at times is ‘Well, what are you doing living in a student neighborhood?’” Schneiderhan said.

But she and other residents said their love for the neighborhood is why they’ve stayed for so long.

“You’re so close to everything, and there’s a wonderful vibrancy to the area around the University,” Schneiderhan said.

Most residents in the neighborhood surrounding the University enjoy living among students.

“They’re polite, energetic, enthusiastic people to have in the neighborhood,” Johnson said. “I wouldn’t trade it for anything. I love this area.”