When I met Kent Christensen in July 2009, I was badly in need of safe haven. I was hurriedly departing a duplex I’d shared with a guy who turned out to be a meth addict; first he’d disappeared, then he’d come back to steal items including my camera, my guitar, my spare change, and a lightbulb. “We’ve had problems,” admitted Kent as he showed me the room in which I now live, “but the problems leave.” He smiled. “We don’t.”

And stay Kent did, until he died of cancer last month at the age of 59. His wife Ann is remaining in the house, which she now shares with the couple’s adult daughter Elise and with us—several renters who occupy spacious rooms in the 6,000-square-foot house.

In mid-July, I interviewed Kent for this post; I hoped to publish it during his lifetime, none of us then knowing just how little time he had left. Sitting in the den above the garage/workshop he’d built with his own hands, Kent talked about his life, his family, his values, and the Minneapolis neighborhood he called home for half his life.

Kent was born in 1952; he grew up in Northfield, near the Carleton College campus. He didn’t finish high school—”1968 was a different era,” he told me. “I didn’t really see the point in high school.” He remained in Northfield, working in retail and raising a daughter with his first wife. That marriage ended, and Kent moved to Minneapolis in 1981. He and Ann married in 1982, and set to work restoring this 122-year-old house. It needed a lot of work. A lot.

“There was a bathtub in the foyer,” said Kent. “When I moved in, the plaster from the second floor ceiling was on the floor. It hadn’t even been shoveled up.” But Kent recognized the potential: a beautiful structure that was built for a wealthy family, and now feels luxurious again. Last year, Kent showed me how the front-facing windowpanes are noticeably thicker than the side- and back-facing panes, and pointed out that the ventilation shaft for the bathrooms was deliberately built to angle forward and come out near the front of the roof—so neighbors could clearly see that the house had indoor plumbing.

Besides restoring the interior, Kent added 1,200 square feet of space, expanding the back of the house. The original front porch had been removed, and Kent rebuilt it using vintage photographs as a guide. To accommodate the wheelchair required by Sarah, the older of his and Ann’s two daughters, he built an elevator, topping the shaft with an observation tower and a lamp that can be seen from I-94, high on the hill to the south as you enter or exit the east side of the Lowry Tunnel. (My friends Ben Clark and Andrea Swensson, who live across the freeway, can see the house clearly and refer to it as “the Gablatorium.” They joke about anchoring their airship at “the zephyr beacon.”)

The house sits on the Loring Heights side of the Stevens Square/Loring Heights neighborhood; even with both sides combined, it’s the smallest of Minneapolis’s 81 officially recognized neighborhoods. “Ridgewood Avenue is its own little neighborhood,” Kent observed. “It’s got nothing to do with anything across Franklin [Whitter, to the south], across LaSalle [Stevens Square, to the east], or across the freeway [downtown, to the north]. We’re six blocks of a one-street neighborhood.” 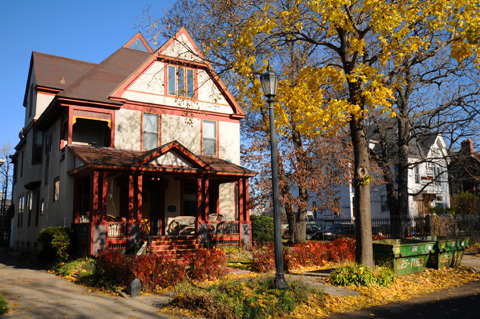 The neighborhood, Kent said, “has been very stable. The only change came three to four years ago when a bunch of buildings on the north side of the street converted to condos. We lost a lot of black families then. The houses were some nice brick places, but there was no chance they’d be refurbished because there was no off-street parking.”

Kent spoke passionately about the support he and Ann found in Minneapolis for Sarah, who has serious disabilities. “With a handicapped daughter,” said Kent, “we probably ended up in the best county and the best state to be in. Over the years, the county has taken on a lot of responsibility from the state. If you live in Morris, Minnesota, and you need an operation, you end up at Hennepin County Medical Center—and if you can’t pay, the county pays. Minnesota’s a great place to live, and I hope it gets back to where it was a few years ago, before the budget cuts.” Kent’s eyes welled with tears, as they often did in his last weeks. “I’ve always considered it a privilege,” he said, “to pay taxes here.”

As a landlord, Kent was very kind to me. When my parked car was sideswiped, Kent bundled up and came out with an air compressor to reinflate my tire. I’m writing this by the light of a lamp that used to belong to my grandmother but that I threw away because it was broken; Kent took it upon himself to pull it out of the trash, fix it, and return it to me.

I wasn’t just a number to Kent—but there have certainly been a number of us. Over the past 30 years, Kent and Ann have had about 130 different renters. One of the first was Lizz Winstead, who Kent and Ann saw make her debut as a standup comic at a place on Nicollet. Within a few years, she was on HBO, and went on to be a co-creator of The Daily Show. Kent also remembered when Prince lived in the building just behind Rudolphs BBQ. “I remember seeing him on Lyndale and Franklin,” said Kent. “He was a distinctive little guy.”

Kent wasn’t as famous as Prince, or Lizz Winstead—but fame was never his goal. He was a loving husband and father, a generous friend, and someone who was always there whenever any of us needed him. He and Ann would sleep outside on the deck just for fun, and he’d cook regular brunches for family and friends—renters included. He loved entertaining visitors, and he proudly displayed photos, paintings, and other tokens bestowed by former renters, many of whom shared Kent’s creative flair. The claw-like sculpture Kent created for the house’s front yard looks like something out of Beetlejuice, and I love it.

As I biked to Kent’s memorial service, held Monday night in North Mississippi Regional Park, I passed a community center with a sign that read, “Do not seek more days in your life—seek more life in your days.” They couldn’t have chosen a more apt testament to the exceptionally rich life of Kent Christensen.