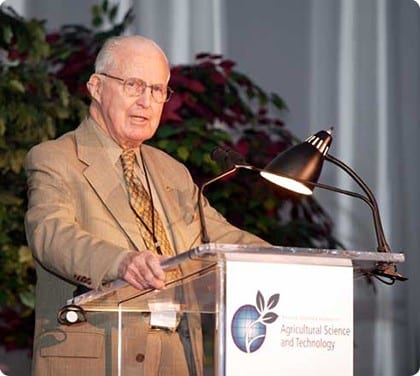 The Sept. 12 death of Nobel laureate Norman Borlaug comes at a time when America is torn in a profound “what’s in it for me” debate over universal health care. It should give us all cause to reflect on “what’s in it for us?”

Hunger, health care, access to food and medicine, and the institutional systems needed to deliver care and sustenance are all public policy issues deeply rooted in Minnesota. As Borlaug’s life and accomplishments should remind us is that these issues are never ending challenges and test what are Minnesota’s strengths.

Any Minnesotan who still reads would know who Norman Borlaug was, what he accomplished as the world’s most prominent plant breeder, and why he won the Nobel Peace Prize and nearly every major honor awarded to scientists. These Minnesotans will have read obituaries the past few days about this most prominent of University of Minnesota alumni.

One obituary should not be missed, however. It is a tribute to Borlaug, “The University Graduate Wrestled with World Hunger and Won,” written by the University’s Deane Morrison.

Let’s add a few other observations for Minnesotans that may not be part of the published materials gathered to honor this great world citizen and Gopher alum.

First, Borlaug’s work in expanding food production and lessening world hunger was recognized with the awarding of the Nobel Peace Prize in 1970. In a passing attempt to quantify this accomplishment, the Atlantic Monthly magazine in 1997 estimated there were 1 billion people around the world still alive because of Borlaug.

The late Ronald D. Clark, editorial editor of the St. Paul Pioneer Press, commented on the Atlantic Monthly article and Borlaug’s achievement while noting another Minnesotan, the late University of Minnesota economist Vernon Ruttan, was also a key player in the “green revolution” that carries on Borlaug’s legacy (Jan. 19, 1997).

While Borlaug was directing the International Center for the Improvement of Wheat and Maize in Mexico and developing high-yielding, short-stem wheat varieties to increase wheat production for large areas of the world, Ruttan was with the International Rice Research Institute in the Philippines overseeing efforts to do the same with rice.

Borlaug’s great achievements were centered on genetics research. Ruttan’s advancements with rice came from having plant breeders apply Borlaug’s genetics breakthroughs to rice while Ruttan and other economists studied economic motives for different rice farming practices. The latter gave rise to economic theory of technological innovation – a parallel path for finding ways to feed the world and is germane today for meaningful discussions about hunger and health care.

Such ties for the University of Minnesota are logical. Minnesota is the seventh largest agricultural state in the nation, based on the economic value of crops and livestock produced on farms. Minnesota is hands-down the largest center of the food industry in North America.

If the food industry has a peer in Minnesota it is the allied fields of medicine, including the Mayo Clinic and University of Minnesota Hospitals for research and education on through to the huge medical device manufacturing industry closely tied to that research.

For these reasons, Minnesota policy makers must find ways to keep public support for food, health and medicine funded and flowing despite state budget problems. As the plant breeder Borlaug would tell us, we do reap what we sow.

That point was made in 1992 when Borlaug returned to Minnesota for induction into the University’s Wrestling Hall of Fame. He seized the opportunity to travel the state speaking to Twin Cities, Crookston, Grand Rapids, Windom and Mankato college and high school students about the sciences and scientists needed to continue the work of feeding the world.

Dani O’Reilly, then a University Extension Service spokeswoman, cited data at the time showing the agriculture and food industry sciences had an annual shortfall of 45,000 college graduates for jobs at related U.S. food, chemical, pharmaceutical and agribusiness companies.

The medical fields have topped those needs during spurts in the intervening years. Both broad fields will have even greater needs going forward. That’s when another billion people populate the Earth and need food, and when Americans and developing nations determine health care should be available to all their citizens.

Even if moral issues of hunger and health somehow escape you, it should be obvious that these issues are in Minnesota’s economic interest.