Visiting friends in London several years ago, I walked through the National Portrait Gallery with their daughter who was then 18. “I don’t get it,” she admitted as we walked past timeless masterpieces. “They’re all just paintings.”

Her remark concisely illustrated the gulf between the 21st century and, say the 17th—the century of Rembrandt. No doubt the 1600s had their share of people who wondered what’s the big deal about paintings, but 200 years before the dawn of photography and 300 years before the advent of digital manipulation, there must have been a flavor of alchemy to painters’ work. Now, your iPhone can create the kind of likeness it would have taken years of study to paint in the 17th century.

Your phone can’t create a Rembrandt, though, and the Rembrandt exhibit opening at the Minneapolis Institute of Arts on June 24 is as good an opportunity as you may have in your lifetime to see the evidence as to why.

The exhibit is called Rembrandt in America, and the first surprise is what a local story it tells despite consisting of paintings made four centuries ago on the other side of the Atlantic. Tom Rassieur, a curator at the MIA and a co-curator of the traveling exhibit (this is its last stop), hinted at that during a media preview when he noted that to get Rembrandt’s Old Man with a Gold Chain from the Art Institute of Chicago on this stop, he simply had to “play the Lucretia card.”

That would be Rembrandt’s 1666 painting, one of his most personal and arguably the greatest Rembrandt in any American collection. It belongs to the MIA, thanks to the generosity and discerning taste of Herschel V. Jones, owner of the Minneapolis Journal (a predecessor of the Star Tribune), who acquired the painting in the 1920s and later sold it to the MIA at a steep discount—whether the bargain was due to Jones’s local loyalty or the Depression-era economy remains unknown.

Every painting in the exhibit comes from an American collection (hence the title), and each work has a story. The most spectacular may be that of Portrait of a Man, Half-Length, with Arms Akimbo (1658), a painting with an ownership history including A&P supermarket heir Huntington Hartford, Columbia University (where it hung in the president’s office until student protesters took over the office in 1968 and made clear how vulnerable the masterwork was there), Barbara Piasecka Johnson (first a mistress and then a wife to John Seward Johnson of the Johnson & Johnson family), and casino mogul Steve Wynn.

I had the good luck to learn that from Rassieur, but it’s hard to tell how much of the exhibit’s engaging story will be apparent to the casual visitor. The exhibit’s installation in the MIA’s Target Gallery is thoughtful but understated: it’s you and Rembrandt, and the presence of the supporting characters who helped bring the Rembrandts and related works to fruition and then to America must be discerned with the help of relatively sparse text—and an audio tour, if you go that route.

Of course, it’s precisely those supporting characters who make Rembrandt scholarship so confusing. As Rassieur pointed out, Rembrandt worked in a studio system where collaboration between teachers and students was common, which means that even the most advanced scientific methods can be stymied at the task of discerning precisely whose hand painted which strokes.

The story of Rembrandt’s career is one of teaching, learning, and collaboration, and sometimes that’s all happening on the same canvas. Rembrandt in America is thoughtfully curated to highlight these processes, but given that the world’s top art historians still debate some of these pictures, you’re going to need to do a little homework if you’re going to understand the debates. 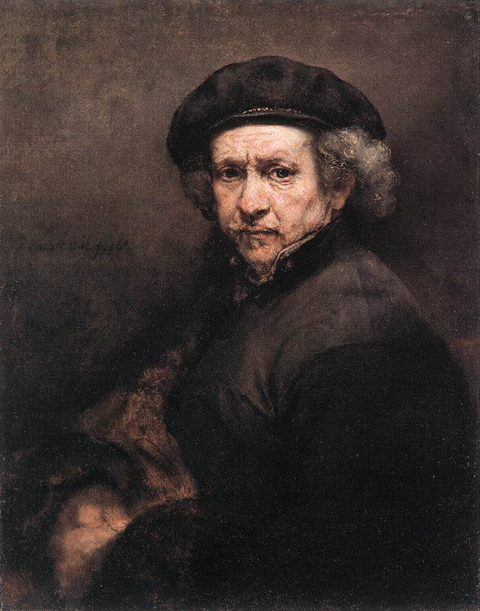 Appreciating Rembrandt isn’t a task for a quick beat-the-heat summer art stop, it’s a task that demands a lifetime. That doesn’t mean you need to devote your career to Rembrandt and his contemporaries, as Rassieur has, but it does mean that Rembrandt is someone you’ll need to come back to. Rembrandt in America provides an invaluable opportunity to take measure of the master’s work through up-close encounters with many of his greatest paintings.

If you already know Rembrandt, this exhibit is essential. If you’re just getting to know the Dutchman, pack a little patience and take the audio tour. Try to visit when the exhibit is relatively uncrowded, so you can look and think without bumping too many elbows. Then go home, read the catalog, and visit the exhibit again.

That’s a lot of work, I know—and you’re forgiven if you don’t have that kind of time or interest. But if you’re able to give that much attention to this great artist, you’ll be rewarded. You’ll return to the 1659 self-portrait and understand why it’s not just a technical but an emotional masterpiece.

That’s Lucretia, the painting in which Rembrandt put the face of his real-life lover—who was excommunicated for living in sin with the painter—onto the mythical character of a woman who took her own life rather than allow herself to be blackmailed by a rapist. It’s a lot to absorb, but fortunately in this case, we have time. The rest of Rembrandt in America will scatter in September, but Lucretia will stay.