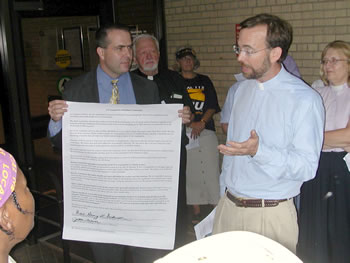 Matt Gladue of the Twin Cities Religion and Labor Network displayed "A Covenant for a Healthier Community" which TCRLN asked the five hospitals to sign.

As a much-needed rain fell Monday on the Twin Cities, a coalition of community, faith and labor leaders held a prayer vigil in front of North Memorial Medical Center to urge a fair contract settlement for health care workers.

More than 3,300 members of Service Employees International Union Local 113 who work in five Twin Cities hospital systems, including Fairview, HealthEast, North Memorial, Methodist, and Children’s, began working without a contract on March 10. Negotiators returned to the bargaining table Tuesday, about a month after the last round of talks ended.

“Healthcare insurance is one of these basic, essential building blocks for a good life,” said Matt Gladue, executive director of the Twin Cities Religion and Labor Network (TCRLN). “We pray that a settlement is reached tomorrow that makes this human necessity more affordable for hospital workers and sets an example for the entire community to gain access to quality, affordable healthcare.”

“Health care is becoming more and more unaffordable for my family,” said Bennie Cromedy, a member of SEIU Local 113 who works as a nursing assistant at Fairview Southdale Hospital “This is about providing the best quality care for our patients, and we can only do that when we have access to affordable health care ourselves.”

The prayer vigil was attended by a group of religious leaders from varying traditions united in their commitment to improving the lives of hospital workers and their families. Though from different religions, all include teachings on the treatment of workers, asserting their right to be justly compensated for their work, and to basic resources allowing them to protect their dignity, including adequate healthcare.

“Healthcare is a basic right, and if anyone should be leading by example, it’s our hospitals,” said Rev. Nancy Anderson, who is a pastor at United Church of Christ in St. Paul Park. “We need to ensure that hospitals act responsibly and we are encouraging Twin Cities hospitals like North Memorial to step up to the plate to make sure their employees can afford the very care they provide every day.”