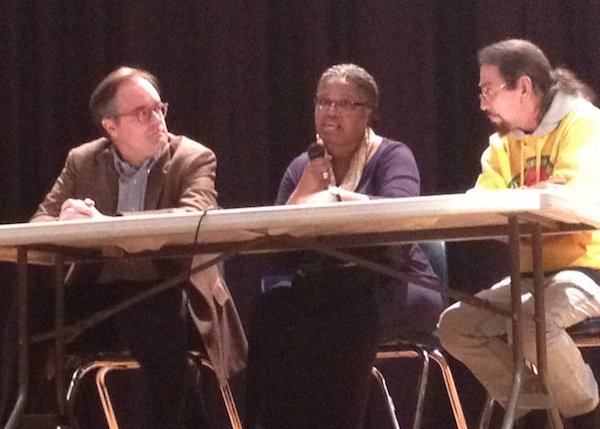 May 17 marked the 60-year anniversary of the historic Brown v. Board of Education Supreme Court decision which found segregated schools unconstitutional. Finding that “separate educational facilities are inherently unequal,” the court decided that segregated school violated the 14th amendment.

Sixty years later, the achievement gap and opportunity gaps persist in our schools. In addition, in the last 30 years there’s actually been an uptick in segregated schools, whether because some schools seek to create a culturally-specific education, or they attract a certain population of students (both students of color or white students), or because housing and district policies have moved away from enforcing the Brown vs. Board mandate, according to University of Minnesota Law Professor Myron Orfield, who on May 17 was a panelist at a forum held at North High School about the anniversary.

Hosted by Public Education Justice Alliance of Minnesota (PEJAM) and Rank-and-file Educators Advocating for Change (REACH), the panelists also included Glen Ford, Executive Editor of Black Agenda Report, and Pia Payne-Shannon, an English teacher at Nellie Stone Johnson Elementary School. They were joined in discussion with a group of parents, grandparents, teachers and community members in a conversation about the inequality still exists for children of color in schools today.

A good deal of the discussion centered on ways in which charter schools, which first became legal in Minnesota in the early 1990s, have created more segregation in public schools. Orfield cited his own research on the subject, stating that while the forces that originally pushed for charter schools, such as the Citizen’s League, promised that they would create more integrated schools and would give kids more choices, after 30 years, both of those promises prove to be a lie, Orfield said.

According to Orfield, every year charter school students are eight points below students in public schools with similar demographics. “They are a race to the bottom,” he said.

“We have charter schools that are very non-white or very white,” Orfield said.

Where in the inner city, many of these charters take on culturally-specific programming, schools such as some in East Bloomington and Eden Prairie have all-white charter schools. “They are an engine of segregation,” he said.

In addition, according to Orfield, public schools have lost 20-30 percent of their revenue because of charter schools. “They are a scandal,” he said, calling them a violation of the 1964 Civil Rights Act.

However, not all at the discussion agreed charter schools were necessarily bad. Donna Pierson said a charter school saved her son.

Pierson’s son had been attending South High, but began to struggle and Pierson felt his teachers weren’t communicating to her what the problem was.

“I’m a very open, reasonable parent- you can email me, you can call me, you can stop and knock on my door, if my child is not doing what he should be doing in class. Do not send home a grade of an ‘F,’ when we can stop this long before he gets there,” she said.

After being alerted to her son’s self-destructive behaviors by his brother, Pierson put him at Prestige Academy (a charter school that is now closed), where he graduated. “So when they say, ‘A lot of black boys don’t graduate from high school,’ it’s because they’re not expected to. The system is not designed for them. The public school has been a problem for eons in our community. So as parents, we are grasping for straws, to save our children, because we don’t want them in penitentiaries.”

In response to a community member suggesting that the community form a lawsuit over policies that have resulted in resegregation of schools, Payne-Shannon cautioned against it.

“It’s not about putting white kids and black kids together,” said community activist Mel Reeves. “That’s not the solution either. The solution is no matter where you are, the bottom line is you educate them.”

Andrew V. McGlory, a community member in the audience, said that parental involvement is the key to success for young people of color, in addition to teachers that actually believe that children of color can succeed. “Most teachers do not believe Black kids can learn,” he said. “To a certain point that has to do with racism.”

Before Brown v. Board, McGlory said that the African American teachers with PhDs were teaching in all-Black schools, and truly believed in their students. “It wasn’t because they knew more, and could teach our kids more. They believed in our kids… we need to start believing in each other. We have the power already. Our kids have the ability to learn.”

Lynne Crockett, a grandmother and activist, specifically addressed the teachers at the forum. “Educators, I wish that you would think of parents as partners, because that’s who we really are,” she said. “And it’s important too as we sit here right now, because without us, we wouldn’t be here. … I just want you to know we’re partners, we’re not the enemies. We are trusting you with our babies. We didn’t bail out to charters- we’re still here. Our kids are still in the buildings, so we’re trusting you, we’re expecting you to deliver. We didn’t go away. We don’t know what you don’t tell us. Don’t give up on us, because we sure haven’t given up on you.”