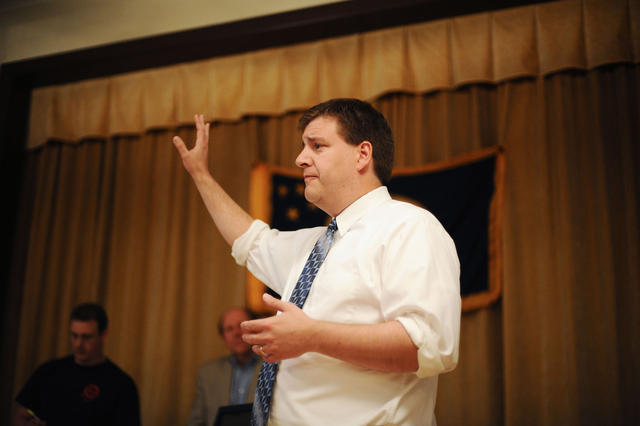 Greg Sakowski’s hometown of Eagan, Minn., sits in what he calls the “awkward middle spot.”

Eagan is the largest city in the district, which extends from St. Paul’s southern working-class suburbs down into more rural and agriculture-based Goodhue and Wabasha counties.

This year’s redistricting has brought historically Democratic territory into a district where Kline, a Republican, has commanded nearly 60 percent of the vote in every election.

For an area with a congressional election on the horizon, the “Minnesota Nice” stereotype still rules the second district.

Sakowski said the majority of people living in his area tend to be Republican, but are “not really in your face about it.”

“When actual election time comes around, there is a little bit of door-to-door,” Sakowski said. “But that’s about it.”

Economics and political science sophomore Cody Clark said people mostly kept their views to themselves in Shakopee, Minn., where he grew up.

“They don’t really converse about it,” Clark said. “Most of my friends and parents and school, they kind of just go with how they feel.”

Regardless of the area’s attitude toward politics, local issues still matter to students from the 2nd District.

Sakowski, along with Clark and other students, is going back to home to vote in November. Sakowski said he wasn’t sure who he would vote for but has formed a decent opinion of Kline over the years.

“I don’t have a big problem with Kline, I just disagree with some of his platforms,” Sakowski said. “But overall I think he’s a decent Republican, as far as that goes. He’s pretty much a safe bet for re-winning it.”

For other students, like Spanish and sociology of law junior Megan Odom, education is the issue drawing her back home to Savage, Minn., to vote in the election.

Odom plans on voting in her hometown to have her say on local school board issues including funding for honors programs and extracurricular arts.

Clark echoed the national concern for the economy as well as bringing jobs to Shakopee, which he says is starting to “boom and grow” from largely rural and agriculture-based, to a more developed, suburban area.

“The No.1 [issue], for I think everybody at this time, is the economy and getting jobs for people that are unemployed,” Clark said. “Just bringing more money to the middle class and bringing jobs to the Congressional district.”

Higher education issues are a personal topic for Obermueller.

“I’m one of the people who had to work their way through college,” Obermueller said. “I know what it’s like to try to figure out how you’re going to pay for the next semester.”

Obermueller worked for food-service company Aramark between his undergraduate studies at Loras College and law school at the University of Iowa. Working through college influenced his views on education issues, including grants and loan programs.

“We’ve got to make sure we’re doing a better job of making those programs available for people who are trying to get through school,” Obermueller said.

For both Obermueller and Kline, cutting government spending is a priority.

“The exponential growth of the federal deficit threatens the future of our children and grandchildren,” said Kline, who, after repeated attempts for an interview, chose to respond through email statements.

“We must institute historic spending cuts, establish statutory caps on how much the federal government can spend, and send the states a Constitutional balanced budget amendment that will force Washington to live within its means.”

Prior to his political career, Kline served in the Marines as a helicopter pilot. Later, he was a personal military aide to presidents Jimmy Carter and Ronald Reagan, tasked with accompanying the president and carrying what’s known as the nuclear “football” — the briefcase containing nuclear war plans should an emergency occur, according to his campaign website.

Since winning against incumbent Bill Luther in 2002, Kline has held his seat in Congress fairly securely. But with the 2012 redistricting shaking up Minnesota’s congressional districts, Kline’s comfortable hold on 2nd District could be in jeopardy.

Richard Keiser, a professor of political science at Carleton College in the 2nd District’s Northfield, Minn., said the addition of historically Democratic-voting areas to the district “could mean trouble” for Kline.

Keiser also said Kline’s track record of inaccessibility and unwillingness to participate in debates may cost him potential voters that are new to the district.

Steven Schier, also a political science professor at Carleton, says while redistricting may tighten the race, the district still favors Republicans, and Kline “still has to be the favorite.”

Schier said Obermueller, who served in the Minnesota House of Representatives from 2009 to 2011, is still a relative unknown to voters compared to the incumbent Kline.

“He has to spend a lot of time just getting his name out and becoming familiar with voters,” Schier said.

But for Obermueller, the redistricting shift has made the position in Congress a “true toss up seat,” something that can work in his favor.

“We’re glad about that because, obviously, we won’t have to be running uphill against the numbers,” Obermueller said.

“It gives us a chance to talk to people about the issues … as opposed to it kind of being predetermined by historical trends.”

Although students have left the district to come to the University, they still pay attention to 2nd District politics and will voice their opinions come November.

“I can vote at home and have an impact on my family and the community I’m still attached to,” Odom said.