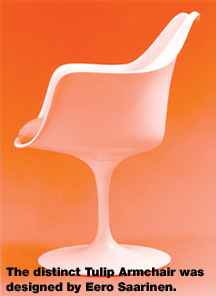 “When fortune calls, offer her a chair,” is a Yiddish Proverb and one of the first things you read as you enter the The Chair: 125 Years of Sitting at the Goldstein Museum of Design on the University of Minnesota’s St. Paul campus. This clever quip introduces you to an unusual and interesting display that explores the aesthetics and utility of chair design, as well as how the desire to merge creativity with ergonomics led to a movement in furniture design.

The exhibit features late 19th and early 20th century chairs from the Museum’s own collection. And while there are examples of Shaker craftsmanship and a DoMore Swivel Office Chair, it’s the Scandinavians who steal the show. Without the clever and innovative concepts developed by Alvar Aalto, Verner Panton, Eero Saarinen and others, there would be no Ikea today.

The chairs themselves are visually arresting, but it’s the historical factoids about the designers themselves that are most fascinating, and likely to lead you to research the artists once you leave the exhibit.

Alva Aalto was born in Finland in 1898. A well-respected architect, he became interested in the organic relationship between man, nature and buildings. In 1930–31 he built the Paimio chair for the Paimio Sanatorium, a building that earned him acclaim as a master of functionalism. Inspired by the tubular steel designs of the Marcel Brever chairs he had in his own home (Brever’s Wassily Arm Chair is also on display), Aalto used molded wood and plywood to create a chair that would ease breathing for tuberculosis patients at the sanatorium. He was instrumental in shaping how Scandinavian concepts would influence international design through the 1950s.

Denmark’s Verner Panton is described as the master of fluid, futuristic designs. His geometrically inspired chairs in bright, primary colors introduced a Pop aesthetic to furniture design. His were the first chairs without back legs, and although they were designed in the early 1960s, Panton’s pieces weren’t manufactured until 1967 because of the technical challenges they posed.

The distinct Tulip Armchair—plastic, fiberglass and a woven wool seat on an aluminum base—is from the Pedestal Collection designed by Eero Saarinen of Finland. One look jolted me back to the 1960s living room of my then-best friend. Who could forget those white fiberglass, orange-seated chairs that sat under gooseneck lamps on red shag carpet?

What’s fun about this exhibit is that it does invoke memories for those who’ve seen the chairs in their “natural” environments. Some designs are instantly recognizable, like the Tulip or the Eames Lounge Chair and Ottoman, created by husband and wife team Charles and Ray Eames. The Eames’ goal with the lounge chair was to create the “warm, receptive look of a well-used first baseman’s mitt.” The first lounge chair they ever made was a gift for their friend, filmmaker Billy Wilder, but the Eames’ lounger eventually became a status symbol in the 1960s and ’70s that represented both success and good taste.

Harry Bertoia, of Italy, worked with Charles and Ray Eames in the 1940s on ergonomic studies to develop practical forms for furniture. His Bird Armchair and Ottoman uses wire rods to create a woven design that conforms to the body. Despite its delicate appearance, the Bird was strong and durable. Bertoia also designed a line of children’s chairs.

The ironic thing about The Chair is that nowhere in the gallery is there a place to sit. The exhibit pieces themselves are, of course, off limits. For most of us who spend too much time sitting—at the computer, watching television or driving—The Chair is a fascinating way to explore both design and ergonomics.