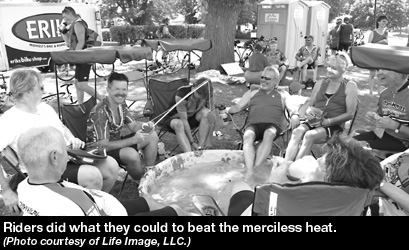 I rode in the first Twin Cities to Chicago AIDS ride in 1996. At the time I thought it was ridiculous that you had to ride a bicycle to raise money. I had been a driver and board member for Open Arms of Minnesota. I thought bicycling was a distraction from delivering meals to homebound people with AIDS. But I was surprised that by doing a physically challenging feat, I was swamped with contributions.

The ride was assisted by 170 volunteer crew members—who did first aid, massage, chiropractic work, bike repairs—and set up pit stops every 10 to 15 miles, as well as the “sweeps” that looked for stranded riders. Others set up camp each night in Lake City, Rochester and Northfield.

The early Chicago AIDS rides were beset by cost overruns that left as little as 30 percent returned to charities. The Red Ribbon Ride is a local effort relying more on volunteer labor and the camps are set up at high schools. This ride returns nearly 80 percent to the beneficiaries.

I’m 53 now and slightly overweight. I was underprepared and nervous about riding in 90- to 100-degree heat. I never sleep well the night before a trip. We left the Mall of America at 7 a.m., July 13, with scores of kids half my age and some older. Searle, a 76 year-old man originally from Trinidad, rode for the third time. He did it for AIDS awareness and because “these people are just so nice.” A gang of riders always cheered him and others as they rode into camp.

The main sponsor is Chipotle, which had a large team of riders and crew volunteers. Chipotle paid their employees regular wages during the ride. Their CEO, Ed, drove the “Burritoebago”—a 30-foot mobile home parked along the way to offer riders beverages, snacks and air-conditioned comfort.

There was also a Wells Fargo team, but the bank offered nothing. The participating riders had to take vacation days and the bank did not match their contributions.

I usually head to northern Minnesota and rarely see the beauty to the south. We rode through Red Wing—truly one of the great river towns on the Mississippi River. We stayed just south in Lake City overlooking Lake Pepin and the hills of Wisconsin.

The second day we rode a mile and a half high up out of the river bed—there are hills all the way, 50 miles to Rochester. We rode past abandoned farms and cemeteries, well-kept large yards and herds of livestock. I always say as I pass a farm, “I can smell the money.”

From Rochester to Northfield we passed through rolling hills. I usually ride alone but I kept crossing paths with the same riders. One pair was a man and a woman, newlyweds. I asked if they were expecting to have children. They both laughed as they both have grandchildren. The Burritoebago was parked outside a Catholic parish made of stone—people in the area are restoring the 1878 structure near Kenyon, Minn.

Riding the hills was like riding waves. I never shifted to my lowest gears, just literally flying off one hill to the next. The last day was a piece of cake—just 40 miles. I signed up for next year’s ride July 19 to 22, 2007. I plan to organize a Pulse team.