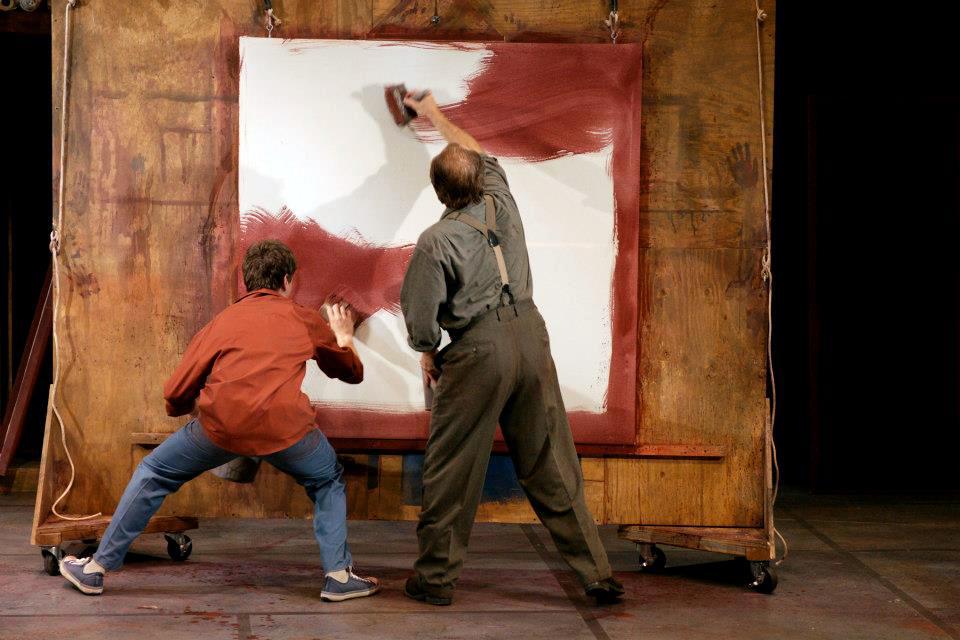 Park Square Theatre’s production of John Logan’s Red is as aggressive, complex, and poignant as you would expect any play based on the life and work of painter Mark Rothko to be. Raising questions of allegiance, patronage, succession, and intimacy, Red provides the time and context for its audience to consider these timeless tensions both as they took place in Rothko’s studio and as we know them today.

Set in Rothko’s Bronx studio circa 1958, this two-man show focuses on the complex relationship between Rothko (J C Cutler) and his new assistant Ken (Steven Lee Johnson). As Rothko works on a comissioned piece for the Four Seasons restaurant, located in the Seagram Building on Park Avenue, his connection with Ken progresses from one of employer and employee to mentor and mentee, much to Rothko’s chagrin. While Ken is enraptured by Rothko and his painting process, he becomes increasingly skeptical of the aging artist’s point of view on works other than his own. With a new generation of artists emerging (Warhol, Johns, and Lichtenstein are cited as examples) Rothko feels increasingly threatened, all the while touting the success of his dethroning of Cubism’s Picasso and Matisse. Ken’s questioning of Rothko—his inability to acknowledge the artistic contributions of others, his attachment to money, his lack of connection with other artists—leads to dramatic exchanges, which eventually tell a great deal about both characters.

Both Cutler and Johnson do a superb job of capturing the conflict within their respective characters. Cutler’s Rothko can be one minute endearing, the next enraged; while Johnson’s Ken shows a clear progression from idealistic admirer to skeptical co-creator. The contained nature of the show—two characters, one room—provides a pressure cooker of sorts, allowing for discussions of minutiae to spiral into existentialism. A conversation about paint color easily transitions to a foray into Ken’s past, a trip well-executed by both actors.

Perhaps the most interesting aspect of the show, however, is the art. A scene of Ken and Rothko prepping a canvas for painting outshone even the most emotionally wraught moments of the play. Always present and glowing in the background were large Rothko-esque pieces featuring the vivid reds and oranges many of us know. This more than anything may be a testament to Rothko’s brilliance, allowing us to excuse his rough exterior: the paintings aren’t great. While fine stand-ins, they continually point to the talent and vision of the original artist, assuring the audience that while artists all fade away, by choice or force, their work remains just as Cutler’s Rothko hoped it would: vivid, saturated, and red.