While foreclosure numbers in the Twin Cities seem to have leveled off (at least for now) in the last few quarters, the poor economy has taken its toll on individuals and families in the metro area.  People are taking in roommates, moving in with family, and in some cases, moving into homeless shelters or onto the street, because they simply can’t make ends meet.  Homelessness among families in Hennepin County was at the highest level since 2000 in the third quarter of 2009, and Twin Cities rental market vacancies trended to the highest in over four years, according to the “2 x 4” report released by the Minnesota Housing Partnership (MHP) in December.

MHP is a statewide nonprofit that provides local governments and nonprofit housing organizations access to loans, grants, and technical expertise to plan and construct housing; and also advocates for and educates people on sound housing policies.  In the past, MHP published an annual report on housing trends, but recently MHP has switched to providing data on a quarterly basis because the economic situation was changing so rapidly, according to Chip Halbach, Executive Director of MHP. 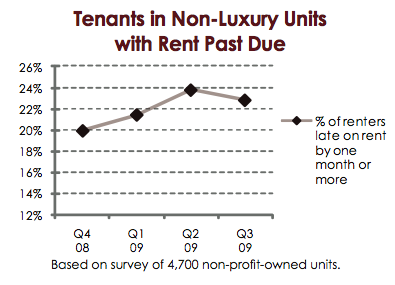 The report finds that while rental rates remain stable, vacancies are quickly rising.  Halbach said that “a significant number of people with modestly priced housing are falling behind in rent.”  Vacancy rates rose almost half a percentage point to 6.4 percent, a rate not seen since early 2005, according to the report, and are expected to rise again soon.  At the same time, vacancy rates for low cost rental units (under $1000/month) remained stable, indicating a stronger market demand for affordable units, the report states.

“People are doubling up,” Halbach said, “or moving back in with their parents.”  For example, Macalester graduate Sarah Rassmussen lost her job last year and had to move in with her parents.  She’s employed again now, but making much less money, so she has taken on roommates.  “It’s worked out pretty well,” she said.

In fact, a number of people that I spoke with for this article have highlighted the positives of living with others.  Tracy Yue, for example, who lives in St. Paul, recently changed careers.  She said in the past she indulged herself by not getting a roommate, even though it made sense financially.  “Now I have to be ‘smart’ (horrors),” she wrote in a message.

Jim Bueche, from Minneapolis, said that since he originally comes from a big family, he finds comforts in dense living, although not without complications.   “For me, I have struggled with the idea that the large family has sort of run its course,” he wrote in a message, “and trying to find those benefits/values/comforts in some other evolved form is challenging – if not full on dysfunctional.”

While denser living can turn out positively for some, it’s not always an option.  Those who don’t have safety nets — family to move in with or friends with whom they can share housing — can end up in shelters. “There’s been a huge increase in homelessness,” Halbach said.

The data MHP collects on homelessness covers only families, because of limitations of data sources (MHP collects data from Hennepin County contracted shelters and also Minneapolis and St. Paul public schools).  That data indicates that 334 different families were sheltered by Hennepin County publicly funded shelters in September 2009, the highest number of families since 2000, and nearly twice as high as in September 2006.

Adding to the problem is that there is not enough room in the shelters, according to Halbach.  In an article for MPR this November, Madeleine Baran shows the dire situation in a number of homeless shelters that are filled to capacity.

Homeless youth who don’t live with their parents have to make a choice between staying in school and applying for the federal Low Income Housing Tax Credit.  Currently, it is illegal for youth to seek subsidized housing if they are still in school.  Halbach said that he is working with Keith Ellison and other legislators to change the law, so that youth who are not living with their parents can stay in school and live in subsidized housing at the same time.

The good news, according to Halbach, is that foreclosures seem to have leveled off, at least temporarily, as a result of federal programs and banks holding off from pursing foreclosures.   However, unemployment is still high, and people are still struggling to make ends meet. 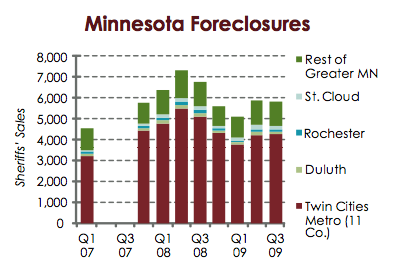 “We believe the overall economy is driving the problems in housing,” Halbach said.  “People just don’t have the income to cover the cost of living.”  MHP hopes that their 2 x 4 report will inform policymakers’ debate and response to Minnesota’s current housing crisis.