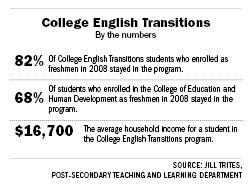 For refugees adapting to new life in the U.S., accessing health care, child care and transportation is a challenge without knowing the language.

In the Cedar-Riverside neighborhood, where a large portion of residents are foreign-born, Cedar Riverside Adult Education Collaborative offers English classes to adult non-native speakers. But many students struggle with their classes, said Rachel Borrell, a recent University of Minnesota psychology graduate.

Borrell, whose senior paper on language learning among refugees won the University’s 2011 Sharon Borine Award, volunteered at the collaborative last fall as an assistant teacher for a beginners class. She said her students, most of whom were recent Somali refugees, often missed classes or had difficulties learning.

Many recent refugees experience health problems inhibiting their ability to learn, Borrell said. Not knowing the language, they are often not aware of available health care resources or lack transportation to access them.

“I definitely think there are resources, but with the language barrier, access to those resources is just very difficult,” Borrell said.

Child care is also an issue, she said. Attending a three-hour class is difficult for students with children. The East African Women’s Center, which was located in Riverside, used to provide child care as well as English and parenting classes to recent female refugees. But due to a lack of funding, it closed in January.

Bahjo Mahamud, also a recent University graduate, has volunteered at the collaborative since her freshman year in 2007. Like Borrell, she said refugees often have issues accessing health care.

“I go to Cedar[-Riverside] and see a lot of parents who are getting overweight or they sit so long that their legs are clotted up with blood,” she said. “I want to be able to have them come where they feel comfortable to work out and get better nutrition care.”

Learning English at the U

Mahamud is the first in her family to earn a four-year college degree after they arrived in the U.S. from Somalia in 2000.

As a freshman, Mahamud was placed in the College English Transitions program.

CET students take classes through the Post-Secondary Teaching and Learning department in the College of Education and Human Development. The classes are similar to those taken by other CEHD students, but in addition, students are required to take specific writing, speech and study skills classes.

“There is a certain vernacular at the University that is important for them to learn in their first year in order to be successful at the U,” said Nate Whittaker, a TRiO adviser.

Most of the students in CET are recent immigrants who, like Mahamud, lived in the U.S. for less than eight years prior to enrollment. For them, making the transition to the University can be difficult, said Jill Trites, a senior teaching specialist in PsTL.

“There’s just a huge gap in the academic preparedness between CET students and their other classmates as first-year students,” Trites said. “They’re new to formal education and to the American system; they’re new to college.”

Another challenge is being labeled as an English as a Second Language student, Whittaker said. CET students don’t always distinguish between the program and ESL, which many of them were enrolled in during high school.

Mahamud said that as a freshman, she didn’t want to take CET classes for that reason. But looking back, she is glad that she was part of the program.

“I’m happy that I was in it because I don’t think I would have been where I’m at today,” she said. “It helped me keep my GPA, and it helped me build skills that I needed in the mainstream courses. With all the stigma that came with it, in the end I felt like it was beneficial.”

CET students often have many familial responsibilities in addition to their schoolwork, Trites said. When a student is the only English-speaker in the family, he or she has to handle a lot of the family’s communication with employers, educators and health care workers.

There can also be pressure from family members to pursue a certain career. She said many parents of CET students want their children to pursue health-related careers.

When Mahamud started college, her family encouraged her to become a doctor. Not only are health-related careers profitable, but they also create a possibility for young people to eventually return to Somalia and work in hospitals, Mahamud said.

However, because of the admissions criteria for programs in the medical field, few students are able to pursue those types of careers.

“If you’re the first to ever graduate from high school in your hometown back in your home country, you’re carrying the weight of that village on your shoulders,” Trites said. “And it’s so hard to see that big responsibility put on an 18-year-old.”

But in the end, she said, students are very successful.

“Our students are highly motivated, and they really want to succeed, and they have the ability to persevere and demonstrate a lot of resilience,” she said.