MADELINE ISLAND, Wis. — An island in Lake Superior, largest of the Apostle Islands. My family is here on summer vacation; it’s what we do every year. I missed a few years when I was in high school and college—after a tortuous week confined to a tiny cabin in the rain with my parents and three younger siblings, I came home with a severe case of island-phobia—but my family has come up every year.

To say that Madeline Island is a big deal to my family is an understatement. It was 50 years ago this summer that my dad’s family started coming up to the island; my dad and his siblings would stay for weeks or even months in a rented cabin with my grandmother (and, when he could get away from work, my grandfather). Just over 32 years ago, my sister was born here—and by “here,” I mean in this very cabin, just a couple of feet from where I’m sitting right now. My mom went into labor several weeks early, and my dad delivered the baby in the living room while I played with a Fisher-Price airplane in the back bedroom. Jenny’s now a mother herself, and her daughter—my niece Madeline, now three years old—is named after the island.

This week, six of the seven siblings in my dad’s family are here, with their own families, for the annual pilgrimage. The epic resonance of a Gabler family trip to Madeline Island is something that we’re all used to, but it can be a little intense for guests who come to join us. Well-meaning, empathetic relatives ask, “Does your family have a special place you go to each year?” What are you supposed to say? “Well, we went on an Caribbean cruise last year, and who knows, maybe we’ll do it 49 more times in a row!” Or: “No, we don’t have any kids in our family named Mille Lacs.”

Coming up here each year has meant that we’ve never taken any other sort of family vacation—I didn’t see Mount Rushmore until I was almost 30—but we never really missed those vacations that other families took. Sure, we would have loved to see some of America’s wonders, but I think we all knew that piling into the family van and driving to the Grand Canyon would have been the worst idea since Pickett’s Charge, and might have resulted in more casualties.

We always looked forward to “the Island,” stockpiling our books and games and projects. We anticipated sub-rituals like the annual Bayfield day trip with the freaky foray into an antique shop’s basement to see “Zelda” the skeleton; the twilight popcorn-fueled deer-spotting drives (being the good American family we are, of course we made those outings into competitions); and visits to the “Hidden Village,” a genuinely hidden village of tiny houses in the woods, private creation and property of a family of artists who have posted signs begging curious visitors to go away. Should we have obeyed those signs? That, like the question of whether the local environmentalists were right that our private fireworks displays were scaring mother loons away from their babies and rendering the babies vulnerable to predators, was one of those ethical dilemmas we were implicitly taught would eventually go away harmlessly if ignored for long enough—sort of the way I now think about my check-engine light.

Like everyone in my family, it feels as though I have a lifetime’s worth of memories involving this place where I’ve actually spent only somewhere between one and two percent of my life.

Lying sweltering and sick, as a child, in the same bedroom where I’d played while my sister was being born, reading Narnia books and wondering why my arms felt so oddly heavy. Riding around with my dad in his blue Buick, luxuriating in the air conditioning while he played the British Invasion and Paul Simon tapes he’d ordered from Columbia House. Going to the ice cream store with my late grandfather, who said I could order whatever I wanted—even the unprecedented luxury of a two-scoop cone. The night my parents and their friends Ed and Norma laughed so hard over a game of cards that my dad accidentally kicked the table leg and knocked his toenail off, which just made everyone laugh harder. The time, as a preteen, I became furious for some reason at our family friend Susan—who’s a couple of years older than me—and stood on the porch of this same cabin screaming at her, calling her a whore. “You don’t even know what that means!” she cried back at me, in tears. (She was right.) That’s just scratching the surface, and I didn’t even mention the time Norma, dancing to Buddy Holly, tried to whip her leg around above my seated father in a spirited pirouette but overestimated her flexibility and kicked him right in the side of the head. 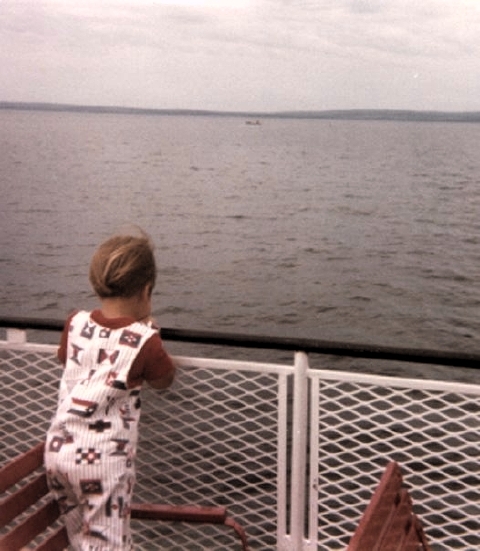 There’s a photo of me as a toddler (above) standing at the railing of one of the ferries that carries passengers to Madeline Island from the mainland town of Bayfield, and it was a little uncanny this afternoon to see my one-year-old nephew Sam riding the ferry, standing there in the same pose with that same brown hair blowing in the wind.

Madeline Island is a special place for my family, and for many others. But what makes it special for us is that—I write this knowing I’ll likely be branded a heretic for saying so—it’s not actually a particularly special place. That’s what the travel writers who venture up here typically don’t get: that Madeline Island isn’t really a destination in the same way other vacation spots are.

Yes, the trees and the rocks and the water are nice—but if trees and rocks and water are really what you’re looking for, you should get out and see the other Apostle Islands, with their dramatic cave-pocked shores. (My family has never actually gone to see the other Apostles. It would feel kind of like flirting with your spouse’s sister—but more significantly, it would likely involve paddling some sort of boat, which means work, which is not what we go on vacation for.)

The island’s sole town, La Pointe, is fine—but if a quaint lakeside town is what you’re looking for, you can do better than the home of Tom’s Burned Down Café and the “Madeline Island Yacht Club.”

There are certainly things that are objectively destination-worthy on Madeline Island, but in my view, the best way to experience the island is to treat it like a leather-bound blank book. It’s a beautiful setting, but the island’s real value lies in the stories you write here. 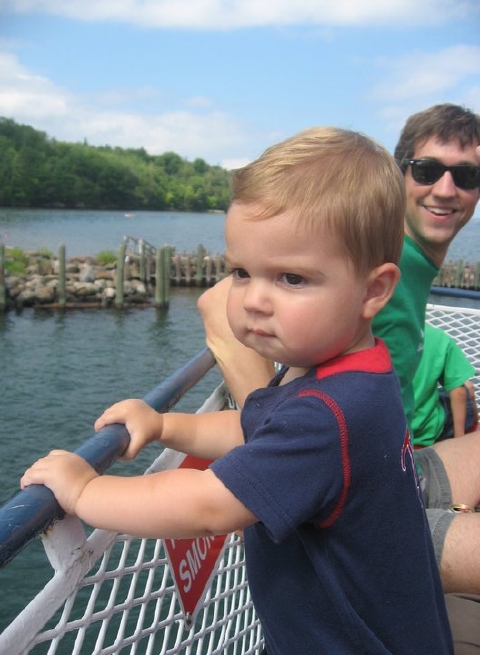 Above: My nephew and me on the ferry in 2010. Photo by Julia Gabler.