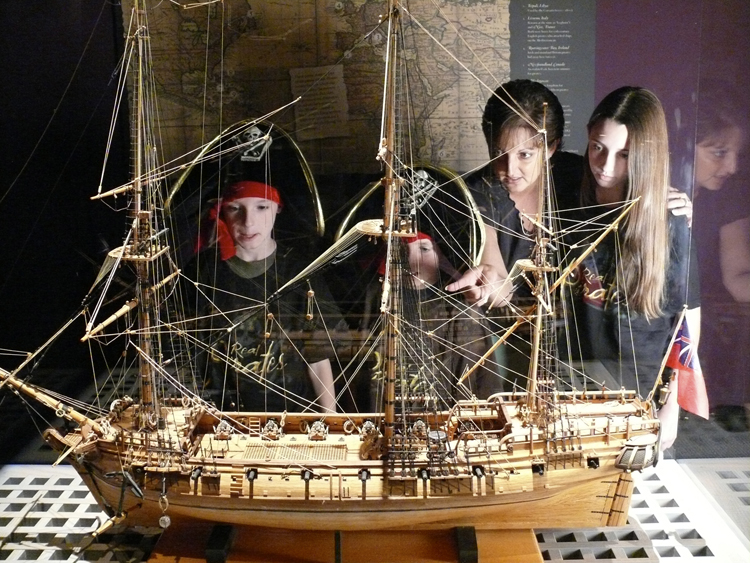 Visiting exhibits like Titanic: The Artifact Exhibition, The Dead Sea Scrolls: Words That Changed the World, and Tutankhamun: The Golden King and the Great Pharaohs at the Science Museum of Minnesota tends to impress one both with the challenges of archaeology and the power of the human imagination. We’ve spun epic visions of desperate drowning hordes, desert tribes in the time of Jesus, and ancient North African kingdoms on the evidence of broken plates, barely-there parchment shreds, and dusty coffins.

Jack, Jesus, and Tut have now cleared out to make way for Real Pirates, a National Geographic exhibit featuring artifacts from the wreck of the Whydah, an early-18th-century pirate vessel that ran aground off Cape Cod and was buried under the shifting sands of the sea floor until it was finally turned up in the 1980s.

The exhibit opens with a gloriously theatrical bang as a video screen rises to reveal the Whydah‘s bell, stored in solution to preserve its integrity. The bell is one of the largest artifacts on display, along with cannons and a chest o’ gold that constitutes (the vitrine label is a little misleading on this score) the only authenticated pirate treasure ever discovered in North American waters.

It’s a rich haul, but it was all buried beneath a sandbar for almost 300 years, so the booty required some enhancement (in true North American fashion) to be ready for prime time. That enhancement comes in the form of models, mannequins, and—yes—costumed interpreters. If your idea of the life piratical comes largely from Pirates of the Caribbean—especially from the ride rather than the movie—you’ll be on familiar shores among the rubber scalliwags nested in the SMM galleries.

The key to success with an exhibit like this is providing information in an orderly and accessible fashion so that the artifacts on display can be appreciated as they’re encountered. On that score, Real Pirates acquits itself well: you get the information you need when you need it, and the curators weren’t above installing a creaking gangway here, a hoistable skull-and-crossbones there. In the exhibit’s final gallery, the serifs disappear and you get a (literal) splash of information about how the Whydah‘s wreck was recovered.

Real Pirates isn’t as masterfully dramatic as Titanic, but nor is it confusing or frustrating as The Dead Sea Scrolls exhibit was. It’s a little hagiographic (much is made of pirates’ multiculturalism, less is said about their brutality), but I can say with confidence that you’ll leave the exhibit with a better understanding of the high seas’ low-lifes. Should you go? Whydah hell not?