Hip hop has plummeted into two insidious pitfalls since its origin as grassroots commentary. One is the endorsement of hazardous-to-mental-health money-mad thuggery and misogynist propaganda. The other is a slick, opportunistic co-opting by academics as think-tank fodder to justify their status as learned interpreters of the street.

Day two of Voices Merging’s hip hop conference “From Vices To Verses: A New Era of Hip-Hop & Action” at the University of Minnesota is a one-out-of-two-ain’t-bad success. Though devoid of knuckle-dragging toxins, it doesn’t escape inane academia.

“[It’s] a new perspective of hip hop, urban arts that people don’t consider,” says Merzi. “You can make it be about what you need to say. In my community, street, society, my country. This [forum] is a step on solid ground for people to understand that. I’m nowhere near Gil Scott-Heron’s generation in terms of activism. But, if we can talk about that, about how, let’s do it.”

Authentic hip hop at once crosses generations and nations in the artistry and activism of 26-year-old Palestinian Abeer Alzinaty, aka Sabreena da Witch. Alzinaty, born in Lyd, Palestine/Israel, 20 minutes from Tel Aviv, 40 minutes from Jerusalem, grew up a spirited, opinionated Palestinian female living inside Israel and became politically active in Israeli and Palestinian territories following the second Intifada of 2000.

She was present for the emergence of hip hop in Palestine. Alzinaty’s also in Slingshot Hip Hop, New York director-producer Jackie Reem Salloum’s internationally lauded, groundbreaking documentary of young Palestinians living in Gaza, the West Bank and in Israel as they discover hip hop as a means to prevail against divisions imposed by occupation and poverty.

“Hip hop in Palestine started in my home town,” she recalls. “My cousins and friends were doing it in their bedrooms.” She joined them rather than sacrifice safety to suicidal street defiance of authority. “I was afraid of getting arrested. And of getting shot.”

Artistic expression being the better part of valor, “I started writing political and social lyrics resisting occupation,” Alzinaty continues. Daring as it was for Palestinian males to openly defy convention, Abeer Alzinaty was up against zero tolerance. “One day before [a] tour, my parents get a phone call from my father’s side [of the family]. They said, ‘If she goes on-stage, we shoot her.’ That day, my parents decided I’m never gonna do hip hop.”

Alzinaty decided differently. She skipped the tour, but determinedly pursued an outspoken career. “Eight years later, I’m here. I released an album (A Woman Under the Influence) all by myself. I learned real hip hop comes from the depths of your belly. As long as there are honor killings…a struggle, occupation, injustice, there are gonna be rude women like me.”

The firebrand rapper-vocalist is as passionate about the integrity of the genre as she was about her innate right to be an artist. “I fell in love with Tupac – until I saw how he behaved around women. I loved everything he said against the police and nothing he said about women. I love [hip hop] culture so much – and I hate it. How could you fight for freedom and try to subjugate me [as a female], own me? A body, my mind, my emotions.”

She decries material exploitation by rappers. “I know Palestinian artists who started singing against capitalism. Today they make commercials for phone companies. I talk about women who are killed. I want to bring them back. I want to bring back Native Americans, who were erased, who are dead because we’re here. These are not comfortable conversations.”

Neither were the words of pioneers The Last Poets who shook up sensibilities everywhere for Black and White alike. They made, however, an indelible mark on American culture. Abeer Alzinaty follows suit, a voice for personal, social and political change. 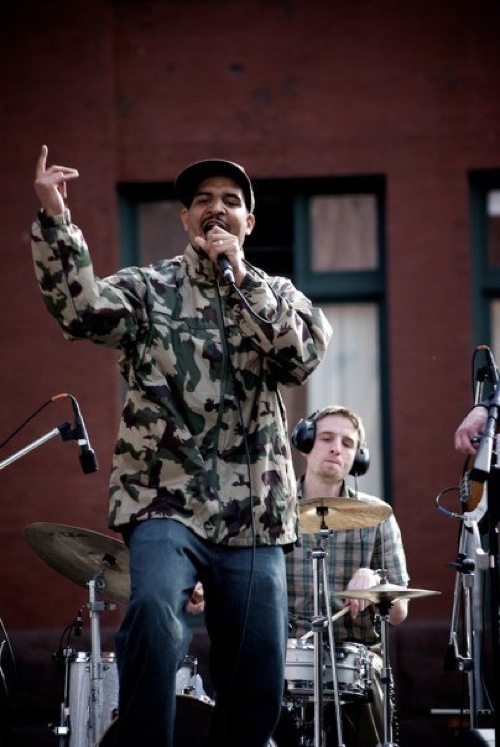 Band members Chris Cox, Brihanu and Bryan Berry clue workshop attendees in on how hip hop is disseminated in Cuba, where artists are subsidized by the government and censorship is altogether different. For instance, U.S. vigilante boycotts cost The Dixie Chicks airplay and sales after Natalie Maine exercised her right to denounce George Bush. In Cuba, authorities refuse to let sexism and messages of material obsession on the radio.

That policy would bankrupt U.S. labels and put superstars out of work. Overnight.

Rapper-lyricist Brihanu reflects on what he calls the commodification of American hip hop: “It’s a tool of a capitalist economy. Dehumanizing people, turning them into objects. Including hip hop culture. You take a person’s artistic expression and we see it as, ‘How much can you sell?'”

“The Heart of the Beat: Poetry of Rap” follows, moderated by author Alexs Pate with panelists Leola Johnson of Macalester College and Big Zach and Alicia Steele of the hip hop group Kanser. The program description: “This multimedia panel explores the view that rap is not just the emergent African American literary form of the postmodern ages, but is responsible for scores of young people improbably embracing all the traditional and nontraditional poetic conventions of the English language (through a mix of cultural osmosis, miming and instincts).”

As such why-is-there-air verbiage indicates, it’s a roundtable of pretentious tedium. Big Zach tells the audience that after reading the description, he said to himself, “I don’t know what it means.” Case closed.

After dinner, Bakari Kitwana, author of The Hip-Hop Generation: Young Blacks and the Crisis in African American Culture, speaks in the Weismann. It’s an hour of Kitwana giving an overview of how hip hop qualifies as a movement, dropping names and periodically checking how long he has left to speak.

Things are capped off with a 9 pm to 2 am hip hop blowout at The Cabooze, an uneven concert capably MC’d by DJ Mixwell and Steele. PosNoSys is led by Lee, who picks up where left off in the morning, faking the funk. His band is pretty good, though, especially vocalist Oskar Ly.

Sabreena da Witch works it, exotic, engaging, compelling. Maria Isa, self-impressed, strident and way over the top, belies her heavy rep, coming off, in fact, pedestrian. Toki Wright coasts on the crowd’s energy, but eventually kicks it into gear for a creditable set. Dead Prez milk their entrance, making the audience wait. And wait. Then hit the stage, turning the air a foul-mouthed blue and peppering that infamous epithet.

The place is packed, mostly with enlightened young men and women from the conference.

Who absolutely love it.