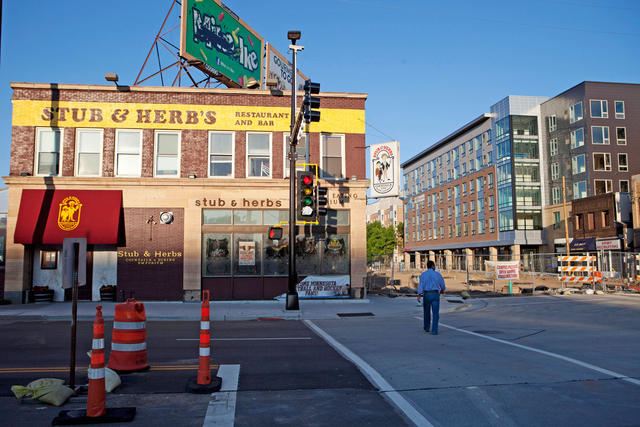 Stub and Herbs, a bar and restaurant, is one of the many businesses on Washington Avenue that has been negatively affected by Central Corridor light-rail construction. Stub and Herbs has seen a 30 percent decrease in revenue. (Photo by Blake Leigh)

The lights at Espresso Expose now turn off at 8 p.m. on weeknights and 5 p.m. on the weekends. A handwritten paper sign advertises the shortened summer hours while the window sign still boasts “open until midnight.”

Since Central Corridor light-rail construction began in 2010, the Stadium Village coffee shop has lost more than a third of its business.

To keep businesses from floundering, cities, organizations and the Metropolitan Council have focused resources on marketing and community relations.

Owners along the line are cutting staff, taking out loans and channeling personal funds into their businesses to stay afloat.

Along the Minneapolis portion of the corridor, 31 businesses, including Espresso Expose, have received forgivable loans through the Ready for Rail Forgivable Loan program, which provides up to $20,000 to small businesses that have lost revenue.

Stub and Herbs took out one of the loans about a month ago.

“We’re down probably 15 percent from last summer and probably 30 [percent] from two summers ago,” said Josh Zavadil, co-owner of the bar and restaurant.

The loan is forgiven 20 percent each year the business remains on the corridor and is completely forgiven after five years.

The University Avenue Business Preparation Collaborative, or U7, started in 2008 to help businesses in the area prepare for and survive the light-rail construction.

“A lot of our staff time is used to promote the forgivable loan program,” Broyld said. The group helps people compile the correct financial records and go through the application step-by-step.

“It’s not been easy for small businesses for sure — or even large businesses.”

Marketing efforts focus on drawing people to the corridor and informing customers of how to reach businesses. Strategies range from signage to coupon books to a recent campaign launched with billboard and bus ads.

Emily Stern, a senior project coordinator for Minneapolis, said it’s important to get word out that businesses are open and to convey a social responsibility for customers to visit them. 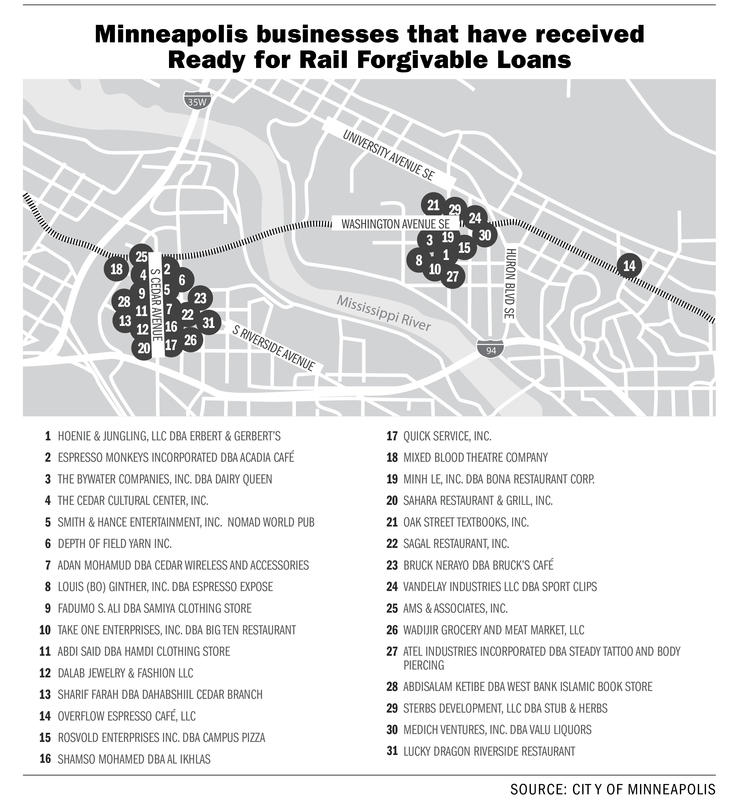 What keeps people away

Chris Ferguson, chair of the Business Resources Collaborative, said the “unknown” aspect of the area deters many customers.

“I tell people it’s easier to drive down University Avenue most days than it is to drive down 94, but people still avoid it because they don’t know what to expect,” he said.

Ferguson said the media has done a disservice to the business community by highlighting some aspects of the construction. He said driving isn’t that bad and side-street parking is typically available because there aren’t as many cars.

“I think the worst part is people hear just how bad it is over here, and they don’t even try to come over,” Zavadil said.

The Met Council has channeled $4 million into funding “community outreach coordinators,” who act as liaisons between the Met Council and the community and send out updates of how to access businesses.

“We’ve made a point to feature businesses in the weekly construction updates as much as possible,” Met Council spokeswoman Laura Baenen said.

Most were small projects like repaving lots and repainting spaces, said Craig Blakely, a senior planner for St. Paul.

Minneapolis was unable to fund a similar program because it didn’t have a separate source of funds like St. Paul did, Stern said. St. Paul used tax-increment financing, a public financing method used to generate revenues for redevelopment purposes, for most of the program’s expense.

“For some of the businesses it’s been a very effective mitigation tool to have the parking where they lost their on-street parking,” Ferguson said.

As heavy construction wraps up this fall, businesses hope to begin the recovery process.

“I think it’s going to take a while for businesses to recover,” said Broyld of U7. Though next year will be lighter construction, the light rail won’t be operating yet.

“People are really concerned that shoppers are not going to come back to the numbers that they were prior,” Broyld said. “For some businesses, it’s a whole new ballgame from here on out.”

Weinberg said he expects fall to be busier than summer but still down a third from business in fall of 2010.

“I believe we have to bleed through this here and just keep things as lean as we can and try to be as nice to customers as we can,” Weinberg said.

“My worst nightmare is to go through four years of this and be in the tank so bad that you can’t get out.”

Ferguson said he thinks businesses will begin recovering this fall, but it will take time to fully realize the benefits of the new project.

“Hopefully if we make this a destination, people will use the train to come to visit the U and visit the businesses in this area – that’s the vision,” Ferguson said.

Zavadil said he is “cautiously optimistic” that the light rail will bring more customers when complete.

“I hope it helps,” Zavadil said. “But if it doesn’t, I think you’ll see a lot of people out of business.”