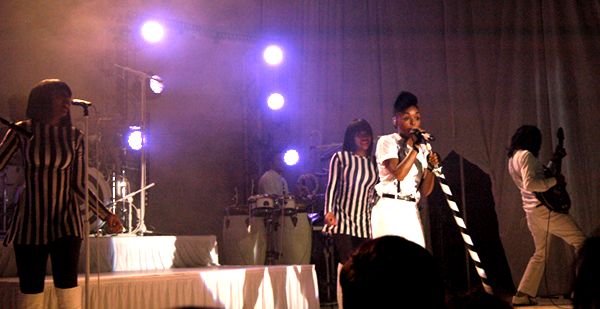 Janelle Monáe’s concert on Tuesday, October 22 at the Skyway Theater, like her music, referenced a legacy of soul that young audiences were eager to witness. The music from her latest contribution, The Electric Lady, like her past works, is thought-provoking and critical, yet funky and cutting edge. Monáe’s music is bringing Afro-futurism to modern-day realities with cleverness, freshness and fun in a musical climate that is in desperate need of her fearless, funky soul. The show was a dynamic unforgettable experience that made it clear she has all of the makings of a musical icon.

Monáe is a genius at making music that is complex and entertaining – an impressive pairing in a musical era in which mainstream content is often saturated with lyrics that seem allergic to any real depth or social reflection. She slices through the logic that banging music needs to be talking nonsense and conscious music needs to be somberly listened to while burning incense and sipping tea with your headwrap on.

This idea has become pervasive and thusly the music primarily heard on the radio is, in the words of the immortal James Brown, “talkin’ loud and sayin’ nothin’.” This concept maintains that positive and complicated music cannot be popular and mainstream, that the all-powerful “music industry,” like a corporate massa, “won’t ‘low it.” But let’s not forget that “Say It Loud, I’m Black and I’m Proud,” was a Billboard top-ten jam AND a revolutionary anthem. And why you asking massa for permission anyway?

Monáe does not forget – and in many ways references James Brown, Stevie Wonder, Lauryn Hill and many other Black artists who have generously and seamlessly given audiences the opportunity to groove and elevate at the same time. She stands out as a mainstream Black artist who can sing, rap, dance, and is not afraid to actually SAY something.

She can honor her single mama in “Ghetto Woman,” then question and celebrate her weirdness in “Q.U.E.E.N.” and “sell hopeinstead of dope.” Or get all existential and vulnerable on “Victorious.” She has somehow managed to transcend an evil and omnipotent industry to create music that you would not mind giving as a gift to your ten-year old nephew for Kwanzaa.

Monáe’s show at the Skyway Theater was performance art, dramatic saga and soul review all in one show. The stage was snow white and seemed to glow and hover in the former cinema turned concert venue. As the crowd awaited the main act, men dressed in all white suits and lab coats were setting up the instruments on stage with the seriousness typically reserved for an operating room.

The show began with the band, dressed in tailored white and black, playing a 1960’s Bond-esque theme, with the refrain, “I don’t want to be a slave again,” as the petite chanteuse was rolled on to the stage Hannibal Lecter style by attendants. Wasting no time to bring the crowd into full burn, she launched into “Givin’ ‘Em What They Love,” a duet from her new album with Prince, the unofficial (or official – depending on who you ask) King of Minneapolis. To add to the freshness of the night, Prince and his entourage were in the house (and walked right past me)!

For the next hour and a half she entertained with an artistic sincerity that was exciting and nourishing to experience. Watching her dance was like stepping back into a time machine and seeing a Jackie Wilson set at the Apollo, or watching a woman possessed by the musical greats who on-stage would succumb to movements of African remembrance.

This speaks to another outlier of Ms. Monáe’s significance in this era of music-making by Black Women – her insistence that her image not be consumed by sex-appeal or overshadow her art. Her moves are not the impressive and impeccably choreographed moves of Beyoncé, but of that ecstatic and seemingly involuntary movement lineage of Michael [Jackson], James and Prince.

The show was as much of a theatrical experience as it was a concert. One of the many highlights of the performance included Monáe running away from her lab coated “attendants” who were attempting to restrain one of her dancing outbursts and her taking them down with a laser gun and continuing her wild shimmying. Another was when she got an audience of thousands to kneel on the ground and whisper-sing with her while she wore a golden cage on her head and meandered through the crowd. She then, after returning to the stage, jumped out and crowd surfed with the sweetest of smiles and trust in her fans.

I attended the show with close friends, many of whom are Black women and artists who grew up in the 80’s and 90’s and got to witness a variety of musicians who looked like us and reflected to us a diversity in womanhood that continues to impact who we are to this day. I am relieved to see in 2013, a mainstream Black woman artist give herself permission to create a fantasy world where she is a runaway android who dances uninhibitedly, crowdsurfs, rhymes effortlessly, and sings joyously. Perhaps this album could be for this generation what The Miseducation of Lauryn Hill and Baduizm was to me and my girlfriends – an album where all our immensity, weirdness and depth could be witnessed and affirmed. And most-importantly danced to!

Monáe instructing the crowd to get low (Photos by Jamal Denman)