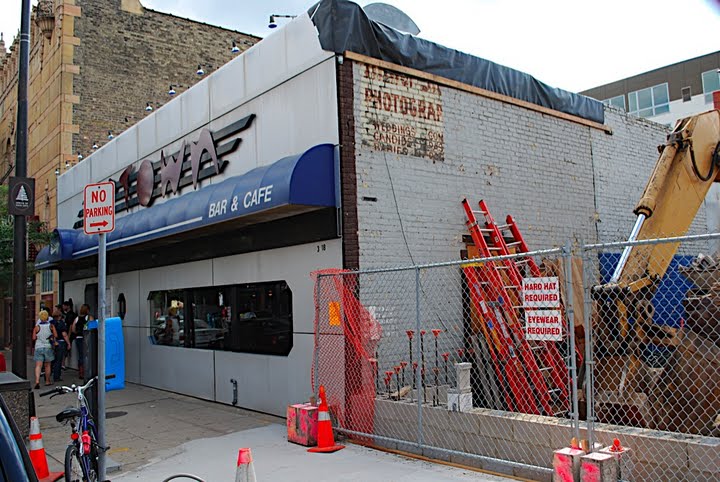 The venerable Uptown Bar and Cafe, located at 3018 Hennepin Avenue, will be gone from its present location beginning this fall. At this time it is unknown if it will relocate in Uptown. Urban Anthology, a commercial real estate developer located in the Lake Calhoun Executive Center, has acquired a purchase agreement from the long-time owner, Frank Toonen, age 88, and will replace the present building with a two-story store.  The new tenant has not been determined, but it might be an Apple computer store.

Urban Anthology also developed the new building which holds the North Face store, and is presently constructing another similar store to host Columbia Sportswear in the space where the Uptown Bar patio used to be. According to Jeffrey Herman, president of Urban Anthology, Toonen and his daughter-in-law Margaret Toonen approached him with the idea of developing the Uptown Bar site along with the Columbia site.  Herman said that an effort had been made to sell it to the bar management but that financing was unavailable.  Herman also said that the purchase agreement would become void if they cannot secure a new tenant.

The Uptown Bar first opened in the 1930’s as a beer and burger joint.  It has long been a principle venue for local bands, usually offering the music free but with a $5 cover on weekends. The bar and café was upgraded in the 1980’s, adopting the metal storefront and moving the stage to the back.  However, it retained its grungy, edgy decorum and is generally regarded as an alternative to the gentrified Uptown.  Weekend mornings are always very busy serving breakfast and lunch and their famous Bloody Mary where you can keep the pint glass. According to Dennis Willey, manager, the Uptown Bar is open more hours than any other Uptown place, being open from 9 a.m. to 2 a.m., with the kitchen operating 12 hours a day.

The developer needs to obtain two variances.  Zoning requires 12 parking spaces, and they do not want to provide any, depending instead on parking in the newly enlarged ramp across the street.  Also, they want to exceed the maximum allowed square footage of 8,000 to have instead 9,500.  They will appear before the Planning Commission August 24 to obtain these variances.  The property is located in the East Calhoun neighborhood and so the developer requested that the ECCO Board support the variances, but the Board declined to make any recommendation.

The building will be two stories, with the front set back to provide a skylight at the front of the building.  It will be 30 feet tall in front and 40 in back, with a green roof of grass.  If things proceed as planned, construction would begin in October and the store would open in April, at the same time as the Columbia store will open.

If the bar moves, it will probably lose its Class A license that allows unlimited alcohol sales and the provision of live bands.  It will probably become a 60/40 establishment, which means that 60% of the revenue has to be from food.  According to the manager Willey, the only other Class A licenses in Uptown are for Williams Pub and Chino Latino. Neither of these is presently offering live music.