Sitting down in Ray Seville’s Robbinsdale home to discuss his career in entertainment was no quick trip down memory lane.

In a nearly four-hour conversation, 53-year-old Seville – born Ray Samuels – recalled stories of his life as a disc jockey, promoter, manager, host, Flyte Tyme go-to-guy and so much more.

“When I was on tour with Jesse Johnson I was the body guard, bus driver, road manager, emcee, hairdresser … I did it all,” laughed Seville. “I had to do everything, he kept firing everybody.”

But let’s back up for a minute. Before Seville worked with Johnson, the extravagant front man of the Jesse Johnson’s Revue and original member of The Time, Seville was still just Ray Samuels, a guy who grew up in north Minneapolis and had a love for music and a couple of key connections. 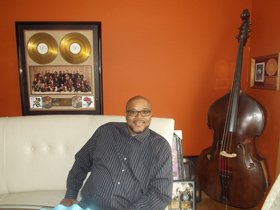 Right: Ray Seville sits next to his uncle’s (Noble “Duke” Samuels)bass with his gold plaque from Sounds of Blackness behind him. (Photos by Harry Colbert, Jr.)

“I was driving in my car with Jimmy Jam (yes, that Jimmy Jam) and we went to the old Studio 94, a club on McKnight and (Interstate) 94 so Jam could buy the club’s old turntables – Jimmy Jam was a cold DJ,” recounted Seville. “He used to spin records and play the keyboard at the same time. So we’re driving with the turntables and we get pulled over by Prince (yes, that Prince) and he asked Jimmy to be in a band (that band would become The Time). Jam said cool and just gave me the turntables he just bought.”

Seville, who was just out of high school and working for the Federal Reserve at the time, began practicing on his gift tables, but with little musical guidance wasn’t progressing. That’s when Jam stepped in again.

“I had the tables about a year and when Jam came off tour he asked me how I was doing DJing and I told him I didn’t know how to mix. So in a day he showed me how to mix, blend records, told me about beats per minute, everything I needed to know,” said Seville. “That was in 1981.”

People tend to gravitate to Seville. Maybe it’s his personality. Maybe it’s the natural salesperson in him. So once Seville felt his skills were worthy of showcasing he decided to throw a house party. According to the Twin Cities entertainment pioneer, whose home is full of gold and platinum plaques, the party had 300 people inside and an additional 200 out on the lawn that the police made disburse. Seville was a DJ, but he quickly realized he was cut out to be a promoter.

“That kind of sparked my career,” said Seville. “Jam was a better DJ and I felt I had to be better in other aspects and that was promoting.”

According to Seville, early in his career he was DJing and promoting at five different clubs each week while maintaining his day job at the Federal Reserve until he was passed over for a promotion and quit. His “night job” earnings were far outpacing his $7,500 annual salary at the Fed.

OK, fast-forward some years. Jimmy Jam and Terry Lewis have splintered off from The Time to form the now famous Flyte Tyme Studio and Seville is back from tour with Jesse Johnson. Seville said he wasn’t working a “regular” job so during the day he was hired to gut the 15,000 square foot warehouse that would become Flyte Tyme. Once he finished, he stayed on to assist in construction and … well just kind of stuck on from there.

“They (Jam and Lewis) hired me to do their record parties and as a music consultant,” said Seville. “It was the perfect job.”

According to Seville it was one of his events that led to a fateful connection.

“I threw a concert for three bands and one was Mint Condition,” said Seville. “I invited Jam and Lewis down and so did ‘Popeye’ (who worked with Mint at the time). Jimmy and Terry came down and said they liked them and were going to sign them.”

Now let’s talk about those plaques.

Seville, who became the operations manager at Flyte Tyme, assisted in one form or another with several successful projects. In his home are plaques of gratitude from artists such as TLC, Usher, New Edition, Mariah Carey, Gladys Knight, Janet Jackson, Johnny Gill, Boys II Men, Jesse Johnson, Mya, Solo, Sounds of Blackness and more. The Sounds of Blackness and Janet Jackson plaques are mounted in the dining room. The only other mounted plaque is one from a movie. It’s a gold plaque for sales of over 500,000 copies of the soundtrack to “How Stella Got Her Groove Back.” Seville said that’s the plaque that means the most to him. 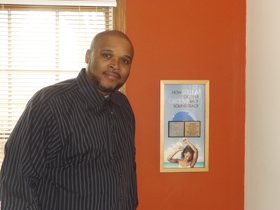 Left: Ray Seville posing next to his gold plaque for “How Stella Got Her Groove Back.”

“Jimmy and Terry didn’t know anything about reggae music,” said Seville, discussing the reggae themed soundtrack produced by the duo. “I did all the consulting on that one. I picked all the artists and co-producers. I even mixed and edited on a couple of songs.”

As a promoter and event producer, 53-year-old Seville has worked with everyone from Salt n Pepa to Keith Sweat, to Tyler Perry to Mike Epps. Each Friday he’s out at Knights of Columbus in Bloomington with Walter “Q Bear” Banks, Jr. and Lorna Pettis. Annually as part of Sumthin’ Special, the group produces the two largest urban parties in the state – the White Out Affair and Black Out Affair.

During our marathon talk Seville threw out a slew of names that many old schoolers would immediately recognize such as DJ Cowboy, Brother Jules and DJ Carl Ray. Seville showed me an “antique” turntable/mixer in his garage next to thousands of boxed-up records. We discussed his musical pedigree – his uncle, Noble “Duke” Samuels was a bassist and president of the jazz union in Kansas City and his father and siblings were part of a traveling band while orphans. We talked about the state of music today and we talked more about Seville’s career, which he summed up as such.

“When I first started, a girl who went to North (Community) High School asked me if she could interview me for the school paper. She asked me what I wanted out of my career and I said, ‘Longevity.’ She said that wasn’t a word.”

Seville has proven that longevity truly is a word.